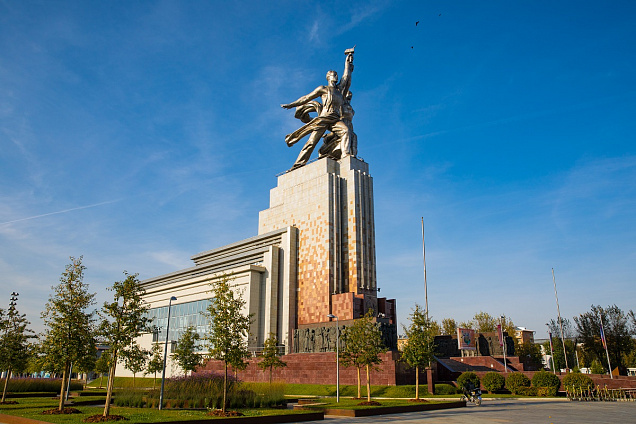 The Life and Times of a Genius in a Skirt: VDNH is unveiling an anniversary exhibition in honour of Nadezhda Lamanova, the first female Russian fashion designer

On 15 October 2021, the Worker and Kolkhoz Woman Pavilion will open its doors on a new exhibition, The Life and Times of a Genius in a Skirt, exploring the incredible life journey of Nadezhda Petrovna Lamanova, the great Russian fashion designer and theatre artist. This unique project, presented to the public in an all-new format for the very first time, celebrates the legendary master’s 160th birth anniversary. Admission is free.

The exposition occupies the pavilion’s second and third floors, corresponding to the two most eventful periods in the designer’s life: the era of Russian Art Nouveau before the upheaval of 1917 and then the post-revolutionary period. In all, VDNH exhibits over 70 genuine theatre and everyday costumes designed by Nadezhda Petrovna Lamanova, along with reconstructions of her creations, based on archival materials.

Aside from the authentic dresses and accessories, the exposition also includes photographs, sketches, posters and thematic documents. Furthermore, the guests will be able to explore a replica of Lamanova’s workshop, with a crafting table and sewing machines.

Nadezhda Petrovna Lamanova is rightfully called the Russian Coco Chanel because she was at the forefront among Russian and Soviet fashion designers. Before 1917, the artist created outfits for the Empress and other illustrious women; and after the revolution, she became the paragon of Soviet fashion.

Lamanova spent several decades, from 1901 onwards, collaborating with Konstantin Stanislavsky, for whose Moscow Art Theatre she designed costumes. The theatre-themed exposition culminates with her masterfully crafted costumes for Anna Karenina. The exhibition space even includes a specially constructed stage, which helps convey the authentic atmosphere.

In 1904, Nadezhda Lamanova received the greatest honour one could get: she was appointed the Empress’ official court supplier.

The choice of VDNH as the exhibition’s location is deliberate. Vera Mukhina, the prominent Soviet monumental sculptor and author of the famous composition Worker and Kolkhoz Woman, which crowns the eponymous historical pavilion, was Lamanova’s best friend.

In 1925, Nadezhda Lamanova, Vera Mukhina, Evgenia Pribylskaya and Nadezhda Makarova received the most coveted prize, the Grand Prix, at the Art Deco exhibition in Paris. They were nominated for their expression of national identity in combination with modern fashion trends. After this triumph, Lamanova and Mukhina continued working together. Later, they created the concept of universal garments: dresses and blouses, something that any woman could sew with her own hands using an old tablecloth, curtain or scarf. That was Lamanova's ultimate goal: to make fashion accessible to everyday people. In 1928, she came up with the brilliant notion of industrial couture. Her laconic concept led to a full-fledged revolution in the art of fashion.

The Life and Times of a Genius in a Skirt is curated by Natalia Kozlova, president of the Magic of Fashion cultural and educational foundation. The art director is Antonio Vilches-Nogerol.

The exhibition will comply with all the applicable Rospotrebnadzor requirements. Visitors are required to wear face masks and keep at an appropriate distance. For more information about the anti-COVID-19 measures currently in force at VDNH, please refer to the official website.