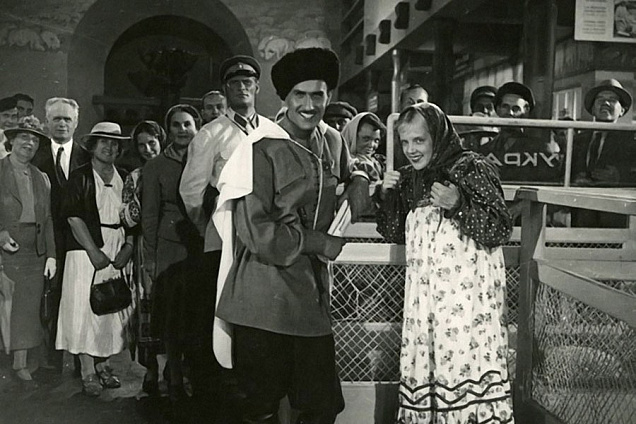 80th anniversary of They Met in Moscow film at VDNH

Soviet comedy film They Met in Moscow directed by Ivan Pyryev was released on 7 November 1941. Some scenes in one of the most iconic Soviet films were actually filmed at the All-Union Agricultural Exhibition, established back in 1939. The film will show the viewers what the Exhibition looked like in its very first years. VDNH will celebrate the film's anniversary by offering themed guided tours of its grounds. Attendance is free by prior registration.

Guided tours of VDNH titled They Met in Moscow will start at 1:00 p.m. and 3:30 p.m. on 7 November and mark the 80th anniversary of the film's premiere. The themed itinerary will follow along the Central Alley, the former Kolkhoz Square and the Animal Husbandry Campus. During the tour of the Exhibition, visitors will learn some interesting facts about the actors and the filming process and marvel at the beautiful designs of historical pavilions of former Soviet republics.

Guided tours will be organised in accordance with the existing safety recommendations of Rospotrebnadzor. The route will start near the information centre located in the left wing of VDNH's Main Entrance Arch. Attendance is free by prior registration.

Russia's Main Exhibition opened its doors in 1939 and was intended not only to demonstrate the achievements of Soviet agriculture but also to serve as a symbol of friendship between Soviet nations. Its gorgeous alleys and majestic pavilions were the perfect setting for the musical comedy about the love story of Glasha Novikova, a swineherd from Vologda, and Musaib Gatuev, a shepherd from Dagestan. That's where the main characters met for the first time, fell in love and agreed to meet again in one year.

The story behind Ivan Pyryev's romantic film was connected to the Exhibition from the very beginning. He was actually inspired to create the film by a Palekh trinket box purchased at the Exhibition. The box's lid featured an idyllic Palekh miniature, which showed a shepherd playing the flute while a barefoot girl was herding baby pigs. The main characters were played by Marina Ladynina and Vladimir Zeldin who became widely popular after the release.

Composer Tikhon Khrennikov and poet Viktor Gusev wrote Pesnya o Moskve ('Song About Moscow') specifically for They Met in Moscow. After the release, it became the signature song of Russia's Main Exhibition.

Anti-coronavirus restrictions are still in place at VDNH. Visitors are expected to wear face masks inside the buildings and observe social distancing everywhere on the grounds. For more information, visit the official website of the Exhibition.