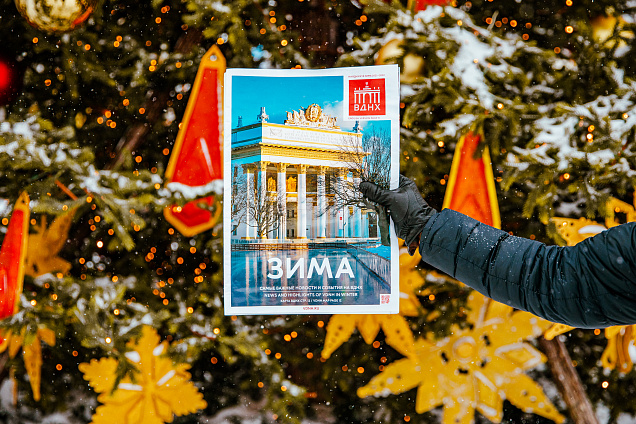 Russia's No. 1 Exhibition has marked the beginning of the summer season with the release of a new issue of the At VDNH magazine. Issue #16 offers a foretaste of the summer's highlights, which are certain to pleasantly surprise visitors and give them reasons to visit VDNH more often. You can pick up the new At VDNH issue at the pavilion information stands and on the premises of the magazine's partners. As always, the online version of the magazine is available for those who prefer the electronic format.

Our regular Events column is about the activities that VDNH residents have in store for visitors. The column gives readers the heads-up about insightful lectures, the new concert season at the Green Theatre and on the rooftop of the Worker and Kolkhoz Woman Pavilion and the new features to premiere during the summer: the Restaumarket gastronomy pavilion, film screenings by Okko and the new multimedia show at the Fairy Tale Theatre.

The Generation Bridge project is another premiere scheduled at VDNH this season. Those visitors who happen to have an old photo taken at the Exhibition in their family archives will be asked to send it to the project office with a short description of the story behind the photo. The senders of the best snaps and stories will be invited to attend VDNH to create remakes of their photographs. One Apollinaria Strogalova, a native of Moscow, is the first to share her story with the readers of At VDNH.

The Accessible Environment column relates the details of VDNH's ongoing inclusion programme, VDNH for All. Readers will find out about the support VDNH gives to visitors with impaired mobility, the Exhibition's effort to build a barrier-free environment and adapt its services to serve people with special health needs. There is a map attached showing the accessibility level of facilities on VDNH grounds for visitors with disabilities.

The Locations column will resonate with those who enjoy discovering new things on VDNH grounds. The column tells you about the best things happening at VDNH right now. You will find out about the exhibits awaiting visitors at the new museums—the Moscow Transport Museum and the Museum of the Special Purpose Garage of the Federal Guard Service of Russia—and the skills that can be mastered at the Park of Crafts: the Caramel Manufactory, Glass Studio and School, Takapulta Comic Book House and Honey House.

In our traditional culinary column, Food, we have made a list of summer cafés with comfortable outdoor seating where soft drinks, ice cream and desserts can be sampled.

The Add Colours to VDNH! column, which premiered in the spring, offers readers to take a closer look at VDNH architecture through the creative process of colouring a monochrome image. The new issue takes the readers to Industry Square where they get to colour the Cosmos and Transport pavilions, as well as the replica of the legendary Vostok spacecraft.

If you need to quickly find your way around the exhibition complex or find some pavilion, recreational area or café you are looking for, use the General Map of VDNH. Enjoy VDNH is the magazine's special section where the information about this summer's highlights is provided in English for the convenience of non-Russian speaking visitors.

At VDNH, published every quarter, is available free of charge around VDNH, and at the hotels and offices of VDNH partners.

Where to find the magazine on VDNH grounds:

Where to find the magazine in the city: