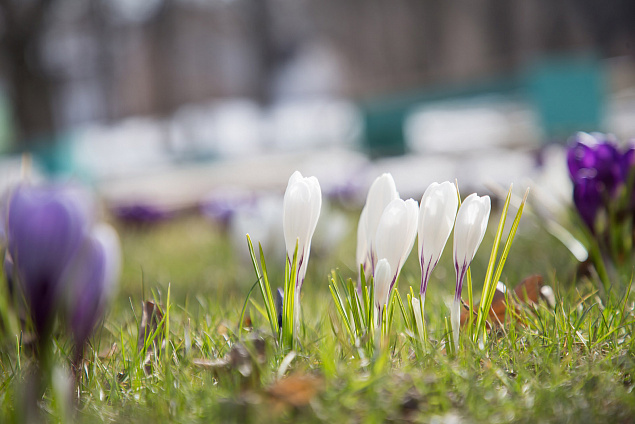 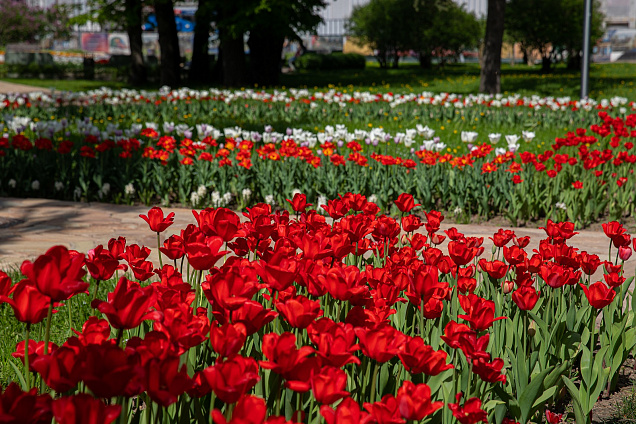 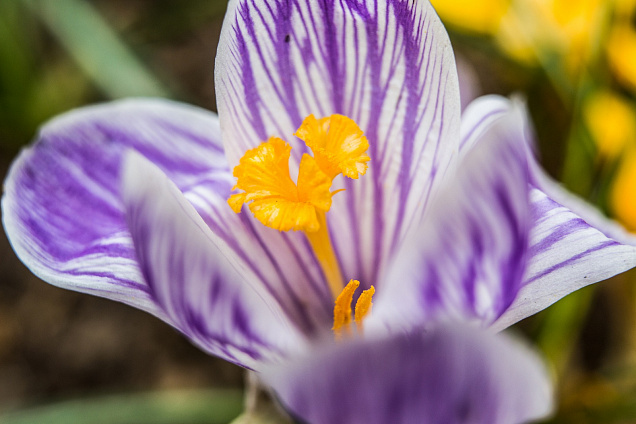 What Floral Attire of VDNH in Spring to be

About 1.5 million bulbous flowers will bloom at VDNH in the spring. Among them are half a million tulips (65 varieties in all), scillas, daffodils and fritillaries.

In April and May, depending on weather conditions, the bulbous plants planted last autumn will bloom at VDNH. Most of them will be presented on the Central Alley. On a total area of more than 1.7 hectares, guests will be able to observe about 1.5 million flowers. A third of them are tulips. The colour palette and varieties are very diverse. White tulips (Hakuun) can be seen near the 14 fountains on the Central Alley, pink ones (Jumbo Pink) will grow near the Moskvarium, red (Abba)—near the Ryazansky Mini-park, orange (Princess Irene)—near the Friendship of Peoples Fountain, lilac (Pearl Pride) and maroon (Black Hero)—in the Ostankino Park. Kaufmanniana tulips, particularly the Showwinner variety and hybrids, which have different colours and shades, are planted the most at VDNH. Visitors to VDNH can admire them at the monument to V.I. Lenin, in front of the Central Pavilion. These tulips have the earliest blooms.

Scillas with thin, light blue petals will also bloom near the Main Entrance Arch, on the South Loop and in the South Rosary. Near the Optics pavilion No 64 and in Nalchinsky Mini-park, visitors may enjoy maroon fritillaries, which look like small mottled bells with flowers. White daffodils with a sunburst core will appear by the historic fountains on the Central Alley.

By June, landscaping specialists will plant over half a million annual and perennial plants of 245 varieties, such as astilbes growing near the historical pavilions of the Central Alley, diverse irises in the Iridarium behind the Green Theatre, daylilies that accompany visitors near the VDNH Ring Road, hostas near the Friendship of Peoples Fountain and on the Central Alley under the lindens, as well as phloxes growing in the Phlox Alley behind the Matrimonial Palace.

Scheduled landscaping and beautification works continue at VDNH: by 1 May, more than 2.5 thousand roses will return to their places on the Central Alley. Previously, they were dug out and temporarily moved to the nursery until spring to install the largest skating rink in Moscow, on which more than 419.8 thousand people rode last winter season. On the flower parterre at the Stone Flower Fountain and near the Friendship of Peoples Fountain, red and pink standard roses of such varieties as Leonardo da Vinci, Collette, Bonica 82, Burgundy Ice and Prince of Monaco Jubilee will again be placed. Their blossoms can be observed from June to October.

More than 300 species of flowers can be seen at VDNH in summer. In addition to perennials and wild species, there are many seasonal plants at VDNH. About a million of them are planted each year.