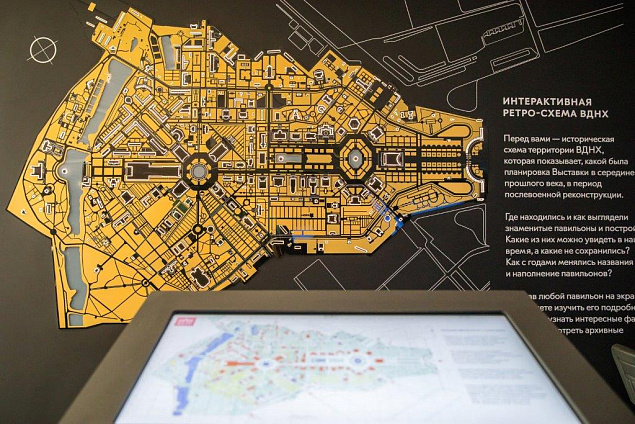 A solemn award ceremony for the winners of the 3rd All-Russian Competition Corporate Museum was held in St. Petersburg on 29 April. The VDNH Museum, which opened on the 80th anniversary of VDNH, became the winner in the category Museum for Everyone. The Oil Centre (PJSC LUKOIL), located in Pavilion No. 25, won in the category Discovery of the Year.

The participants defended their projects at the competition's business forum in St. Petersburg on 27 April. The director of the VDNH Museum Tatyana Zheltonogova and the museum's curator Pavel Nefyodov spoke about the mission and inclusivity of the museum space located in the right circumference of the Main Entrance arch. The victory of the VDNH Museum in the category Museum for Everyone was announced during the award ceremony of the All-Russian Competition Corporate Museum in the White Hall of Peter the Great St. Petersburg Polytechnic University on 29 April.

The VDNH Museum navigates the visitors through the historical junctures of Russia's main exhibition venue. The knowledge they gain helps them create their own routes through the exhibition space. The collection, careful storage and popularisation of VDNH's public heritage, which you can find in the exposition and in the Mediateca, greatly facilitate internal and external social and cultural communications.

The museum space is suitable for all visitors. You can come here with children, the facilities are equipped for people with disabilities, and the information about the exhibits is translated into English and Chinese. You can visit the temporary exhibition The Unofficial Viewpoint of Official Photographers, see an interactive map based on the 1959 master plan for VDNH, order the guided tour Intellectual Walk: The VDNH Cultural Code, borrow a free audio guide to the exposition, watch a cartoon about Murzilka and the Giant travelling through the 1960s exhibition and much more. The museum is located in the right wing of the Main Entrance arch (building 228); opening hours: 11 a.m. to 10 p.m. Closed for maintenance on Mondays.

Another award was given to the Oil Centre, located in Pavilion No. 25 at VDNH. It won in the category Discovery of the Year. The educational centre introduces visitors to the full production cycle of a vertically integrated oil company—from extraction to processing and sale. The exposition is designed in an accessible form, which makes it attractive for a wide audience—from schoolchildren to specialists.

The Corporate Museum competition aims to arouse and develop the public's interest in the industrial, scientific and educational potential of Russia. The revival of the corporate museum tradition plays an important part in the development of intercultural relations between industrial enterprises and society. Such museums have a cultural and educational mission, carefully preserving the traditions of the past for future generations. More than 60 corporate museums from 37 Russian cities took part in the competition. The nominees included the Russian Railway Museum, the Museum of History and Achievements of Gazprom Transgaz Tomsk, the TASS Living Room Museum, the Russian Money Museum and many others.