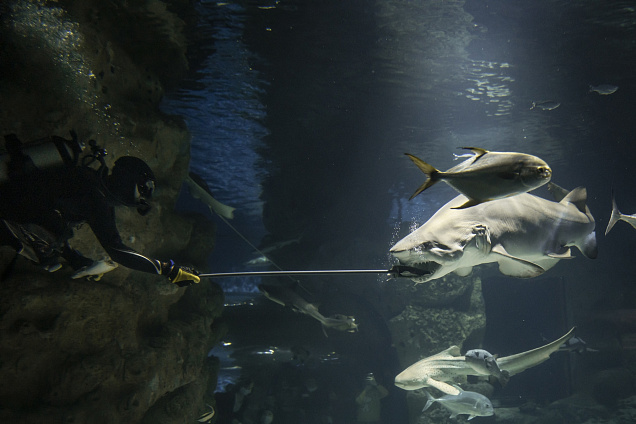 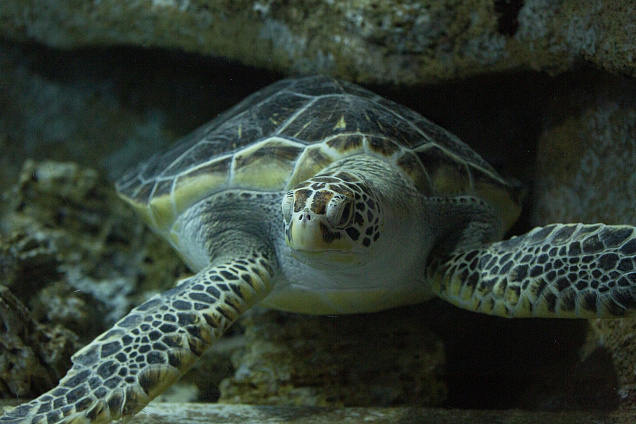 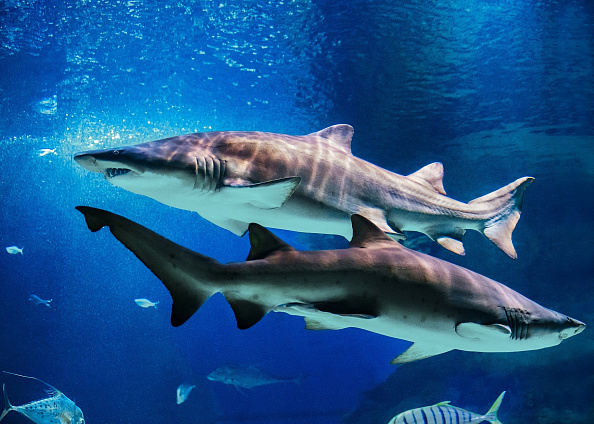 5 May is Diver's Day in Russia. VDNH also celebrates this professional holiday. The Moskvarium Centre of Oceanography and Marine Biology employs 15 divers, who take care of its 80 aquariums as well as swimming pools and Europe's deepest aquatic performance bowl (14 metres). Below you will find ten unusual things the conquerors of the depths working at VDNH's Moskvarium do.

Moskvarium specialists have developed and made a special 1.5-metre long 'spear' for feeding the main predators: the three-metre sand tiger sharks Masha and Misha. The divers put squid and fish on the pointed tip. They also use a chainmail glove made of durable steel, which protects their hands from the bites of Moskvarium's predatory inhabitants.

In mid-January, Moskvarium saw the first whitetip shark born inside its walls. The divers' duties include feeding the baby shark every day. The shark trusts them from birth. It readily approaches them and takes food from their hands. Its favourite delicacy is squid.

3. Taking a seal for a ride

Moskvarium divers love the Baikal seal named Luntik. During the daily cleaning of the seal enclosure, this charming seal male 'rides' one of the divers, biting the tape that the specialists have attached to the gear specially for Luntik's favourite game.

4. Making friends with a turtle

A Hawksbill sea turtle named Barbaris, representing a species of critically endangered sea turtles listed in the IUCN Red List, is the most demanding of the divers. During the feeding sessions in the main saltwater aquarium, three divers plunge into the water at once, with one of them feeding only the turtle. Barbaris has a favourite diver, Ilya Medvedev, whom it singles out from the team. Ilya loves the capricious beauty and selects the most delicious seafood delicacies for her, and also scratches her shell and limbs.

5. Feeding the anemones from a pipette

This is how the unusual relatives of coral polyps and jellyfish get their food. The pipette contains plankton. The divers have to be very focused and accurate when feeding the anemones, which have stinging cells and secrete a poison dangerous to humans.

The sharp teeth of sea predators are one the most interesting things one can find at the bottom of the aquariums. The teeth belong to the sand tiger sharks Misha and Masha as well as whitetip and blacktip reef sharks. The loss of teeth is a natural process for sharks. They have several rows of teeth, which are regularly replaced throughout a shark's life. Since the opening of Moskvarium, the divers have found hundreds of shark teeth ranging from 5 mm to 3 cm in length.

Thanks to the optimal conditions at the VDNH Centre of Oceanography and Marine Biology, catsharks regularly bear healthy young. They lay eggs about once a week. The divers carefully collect the eggs and transfer them to a special incubator for baby sharks.

During an underwater show in the freshwater aquarium, the divers help the actress in a mermaid-tail costume dive into the water. And sometimes the divers themselves take part in the underwater shows together with the Mermaid.

Before the New Year, the divers 'sink' a three-metre wooden sledge with seahorses in a saltwater aquarium, using a crane and special weights amounting to over 1 tonne to fix the sledge on the sandy bottom. They also dive in Santa costumes during the winter holidays.

The divers also sometimes dive with postcards to congratulate visitors during various holidays. For example, they did that on Cosmonautics Day on 12 April. The divers opened a two-metre postcard in the saltwater aquarium with sharks.

VDNH visitors can watch the divers work while they feed the inhabitants of Moskvarium. For instance, the divers feed migratory stingrays and the newly-born whitetip shark every day at 1:15 p.m. in aquarium No. 1. The most spectacular shark feeding takes place in the main saltwater aquarium No. 73 on Wednesdays, Fridays and Sundays at 2 p.m. At 2 p.m. on Tuesdays, Thursdays and Saturdays, you can watch the divers feed the giants of the Amazon, arapaimas, who live in aquarium No. 38 Flooded Forest. You can find the complete feeding schedule on Moskvarium's website. You can also watch the underwater videos of divers feeding the aquatic inhabitants in the comfort of your home. The educational videos are available on Moskvarium's YouTube channel.