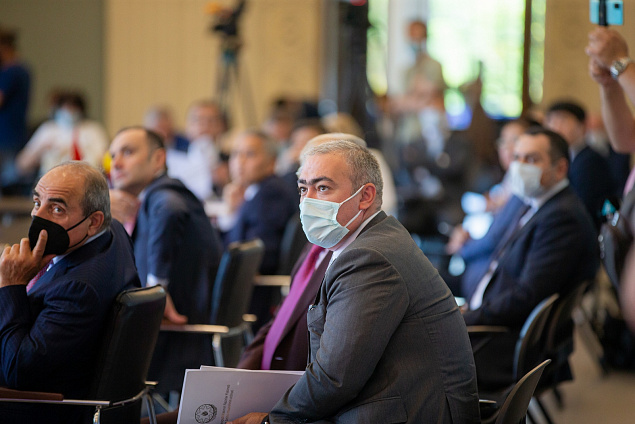 VDNH hosts the 90th meeting of the CIS Economic Council

On 18 June, VDNH's Cosmos pavilion hosted the 90th meeting of the CIS Economic Council. Participants exchanged views on relevant issues of economic cooperation, prospects for interaction between the sectoral bodies of the CIS and issues related to the launch of exhibition and trade centres for CIS Member States at VDNH.

'The most important gift for the 30th anniversary of the CIS celebrated this year will be the opening of the pavilions of the Republic of Kazakhstan, the Kyrgyz Republic and the Republic of Uzbekistan following a long renovation process. Moreover, opening these national pavilions this year is of particular significance because the Council of Heads of State of the CIS declared 2021 the year of architecture and urban planning. The national pavilions of VDNH are an architectural and historical ensemble whose value has been recognised by generations of people in Russia and abroad', stated VDNH General Director Sergey Shogurov.

Guests praised the readiness of the territory and the timely opening of national republic pavilions.

The Chairman of Interstate Statistical Committee of the CIS Vladimir Sokolin made a presentation about macroeconomic indicators for the CIS for 2020. Meanwhile, Deputy Minister of Energy of Russia Pavel Snikkars discussed cooperation between CIS member states in the energy sector.

Other issues discussed included measures to minimise the negative impact of the COVID-19 pandemic on CIS Member State economies.

Participants signed a roadmap for developing and implementing national phytomonitoring programmes to combat the spread of locusts in the period until 2026.

The meeting also considered developments in industry cooperation, among other issues.