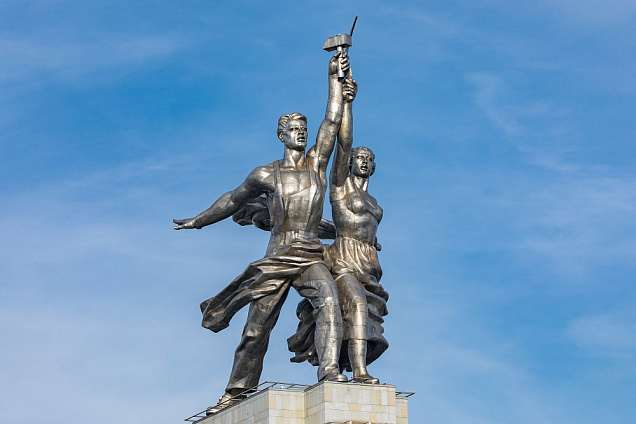 On 1 July 2021, on the 132nd birthday of Soviet sculptor Vera Mukhina, VDNH is launching free guided tours devoted to the life and works of one of Russia's most famous 20th-century sculptors. Visitors will learn about the history and ideas behind the legendary Worker and Kolkhoz Woman monument, a piece of monumental art and the 'ideal and symbol of the Soviet era'. Open-air guided tours will require advanced registration and follow all Federal Service for Consumer Rights Protection (Rospotrebnadzor) recommendations.

The Worker and Kolkhoz Woman sculpture made Vera Mukhina famouse the world over. Designed in 1937 as a symbol of the Soviet pavilion at the World Exhibition in Paris, this great monument made a splash in French media. It was later transported to Moscow and installed for the grand opening of the All-Union Agricultural Exhibition atop a 10-metre post at the Northern Gate (at that time, VDNH's Main Entrance). In 1947, the Worker and Kolkhoz Woman became Mosfilm studio's logo, making it one of the most recognised Soviet monuments. It has remained in its current location since 2010. A new base building was constructed especially for this sculpture. Its proportions are the same as those from the 1937 historical pavilion.

Today, the pavilion by the same name is a popular public site at VDNH. The Worker and Kolkhoz Woman is not only the symbol of the Main National Exhibition but also of Moscow. It hosts a temporary museum, exhibition and events that are part of the educational programme Knowledge. VDNH. During the summer, the pavilion's roof is transformed into a concert venue and observation deck, where visitors to VDNH have the rare opportunity to watch the sunset and take a closer look at Vera Mukhina's famous monument.

VDNH operates in compliance with all current sanitary regulations. Visitors must observe social distancing and use personal protective equipment. More details about the virus prevention measures at VDNH are available on the official website.

Meet the tour guide to start the guided tour at the stylobate of the Worker and Kolkhoz Woman Pavilion.

The number of participants is limited to 25 people upon advance registration.