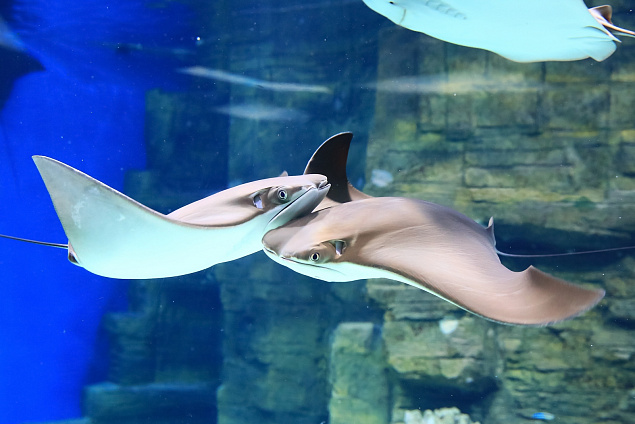 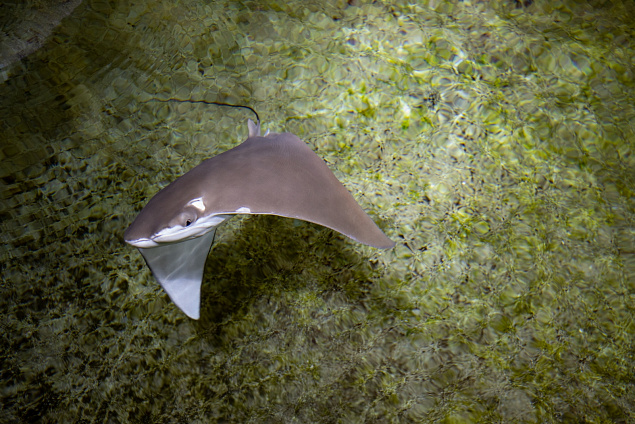 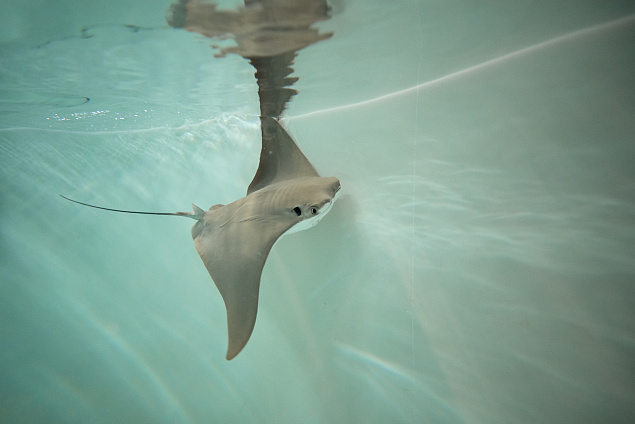 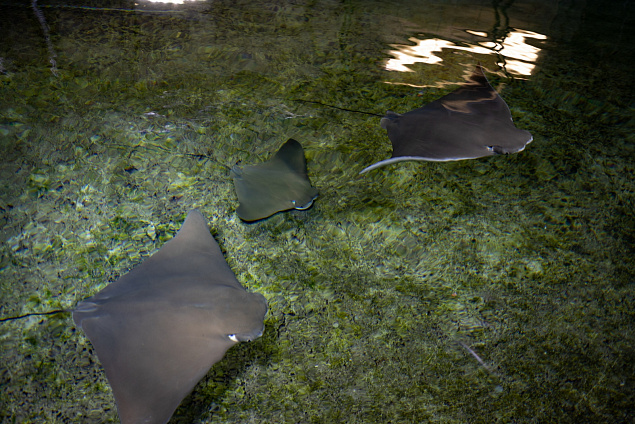 For the first time in its history, an American cownose ray was born at the VDNH Moskvarium. The name will be selected with the help of subscribers to the Oceanography and Marine Biology Centre's official Instagram page.

The newborn stingray is male. It weighs about 500 grams and is 35 centimetres in diameter, not counting the tail. Between 30 June and 7 July, anyone who is interested can suggest a name for the baby stingray by commenting on the official Moskvarium Instagram post announcing the stingray's birth. Moskvarium experts will take all suggestions and choose three for a final round, which will take place on 8 July, in the same online group. The three subscribers who suggested the names selected will be awarded tickets to the oceanarium, and the winner will also receive a ray toy from the official Moskvarium online shop.

'The baby stingray is the first baby of the rhinoptera (cownose) ray family in the six years of the VDNH Moskvarium's existence. After the newborn ray undergoes the necessary adaptation in a special pool, he will be back with his family. We plan to move him to the exposition aquarium in July', said Irina Meintser, the head of the Biology Office at Moskvarium.

Cownose rays are born self-sustainable, i.e., they do not need parental care. Right now the newborn is staying in a separate tank. Fish biologists run regular check-ups, taking measurements and their weight. The baby ray is gradually adapting to his new habitat. He is very interested in his surroundings and the other baby rays cohabitating his tank. Moskvarium's fish biologists prepare a nutritious meal for him each day made up of shrimp, mussels and finely cut calamari, as well as a full range of vitamins and minerals. The baby has an excellent appetite: he eats two to three time a day. The ray is growing fast and may soon move to the larger aquarium, alongside the grown-up cownose rays.

Anybody can see the newborn online. On Wednesday, 30 June at 10:00 a.m., a video will be released on YouTube and official social network groups of the Centre. Experts will present the new inhabitant of their oceanarium.

Cownose rays have been living in the Moskvarium since it opened in 2015. They can be found at the start of the exposition, in a spacious sea water tank No. 1 ('Migrant Rays'). It contains 15 such species: 7 males and 8 females. All of them are of breeding age: between 5 and 10 years old.

Alongside the stingrays in the aquarium are the schoolfish pompanos and snappers, along with blowfishes and blunthead sharks, including a recently born whitetip baby shark.

Moskvarium's exposition is home to more than 30 stingrays of various kinds. Some of the most prominent seawater species, in addition to the cownose ray, are guitar fish, cowtail stingray, Pelagic stingray, giant himantura, bluespotted ribbontail ray and a unique shark ray listed in the International Red Book. Standing out among fresh-water species are ocellate river stingray and Xingu River ray, which inhabit the Amazon display.

The American cownose ray (Rhinoptera bonasus) is a species of cartilage fish that belongs to the order Myliobatiformes. The name was given by the shape of their head, which is similar to the cow's head. A distinctive feature of cownose rays is their wide mouth, which makes them look like they are smiling.

This species has a broad flat head, with eyes on either side and two pineal lobes on its nose. Seven rows of very sharp teeth are designed to easily crush clams, the ray's primary food source. The stingray's tail resembles a whip with sharp poisonous thorns (spikes).
More news
What Floral Attire of VDNH in Spring to be 24 april Natalia Sergunina: VDNH Invites to the Easter Programme 22 april Informative Weekend at Slavic Literature Centre Slovo at VDNH 21 april
В подборке
Открыть мою подборку