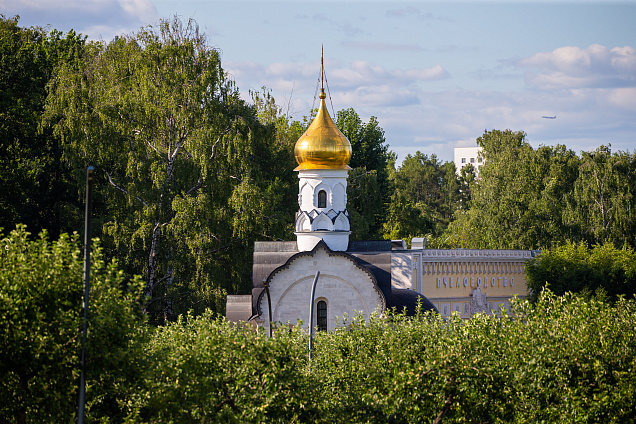 VDNH's church, the Sanctuary Chapel of Saint Basil the Great, turns 20 in August 2021. Its interior has been renovated just in time for the anniversary, thanks to donations from the congregation and VDNH employees. The chapel will be receiving visitors every day, starting from 13 August.

The Sanctuary Chapel of Saint Basil the Great was built in 2001 at the Lilac Garden, right behind Michurin's Garden. It was sanctified by the Patriarch of Moscow and all Russia, Alexey II, on 7 September 2001. On the chapel's 10th anniversary, a decision was made to add an altar section for liturgy services. The sanctuary chapel had a second official opening ceremony in September 2011. This time, it was sanctified by Bishop Tikhon, the Patriarch's vicar.

This place has undergone a major transformation over the recent years: the adjacent territory has been landscaped, and utility and technical work has been carried out to preserve the chapel in a pristine state. All this while, however, the chapel's interior design has remained the same: austere whitewashed walls and vaults.

But as part of the 20th anniversary celebrations, they have been painted over with traditional Byzantine-style Biblical murals. Other interior elements have been renovated as well, including the addition of new furniture and floor tile change.

The chapel will be open to the congregation every day from 10:00 a.m. to 5:00 p.m., starting from 13 August. The chapel will have its own church shop as well. The liturgy service will take place on the first Sunday each month. For a detailed service schedule, please consult the website of the Church of the Tikhvinka Icon of the Mother of God in Alekseevskoye, which the chapel is part of.