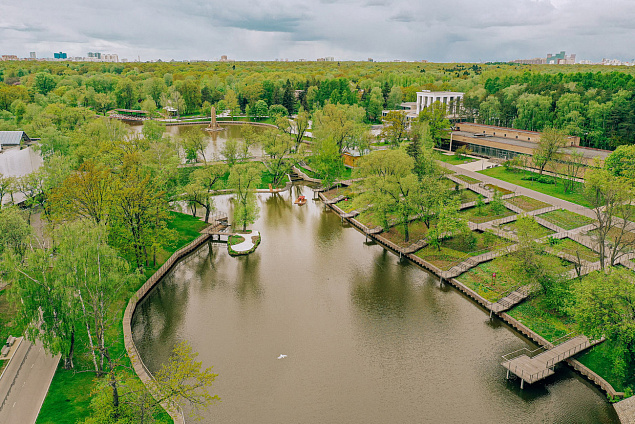 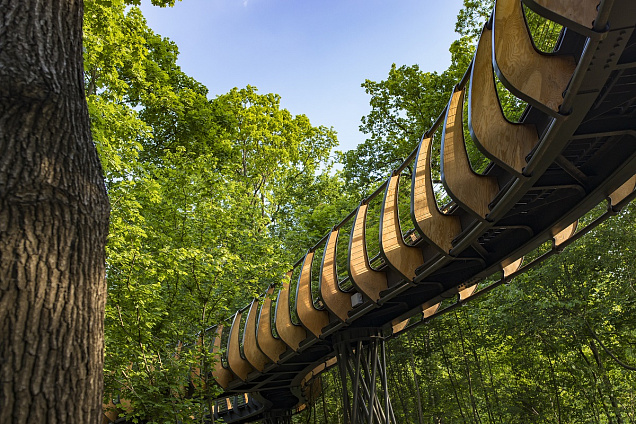 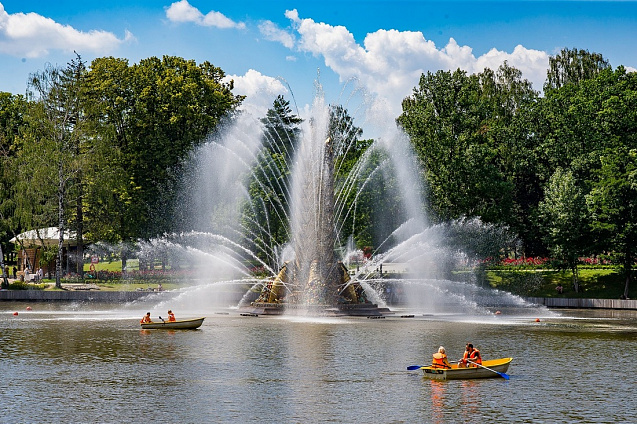 At VDNH, the natural landmarks receive conservation treatment on par with historic pavilions

Historic pavilions and fountains are not the only claim to fame for Russia's No. 1 Exhibition—VDNH is equally proud of its exquisite gardens and parks. The VDNH landscaping team take good care of the historic terrain features. Walking around VDNH, visitors get to enjoy the sight of some rare breeds of lilac, fruit-bearing trees personally bred by Ivan Michurin and sublime age-old oaks. VDNH is especially proud of its very modern landscape park with its green labyrinth and elevated eco trail.

'Many natural landmarks at VDNH such as the Michurin Garden, the flower parterres of Central Alley, Oak Grove, Chestnut Grove and the Kamensky Pond cascade are federal cultural heritage sites. The specialist teams that keep up and restore the natural landmarks accord them as much attention as the historic pavilions and sculptures receive', noted Deputy Mayor of Moscow Natalia Sergunina, as cited on the mos.ru portal.

The garden behind the Cosmos Pavilion bears the name of Ivan Michurin, the eminent Soviet biologist and plant breeder. Planted in 1939 in the run-up toward the opening of the All-Union Agricultural Exhibition (VSKhV), the garden numbered upwards of 500 cultivars of fruit- and berry-bearing trees and shrubs a decade later, including 56 premium apple, pear, plum, cherry and grape varietals cultivated personally by the scientist. Every part of the garden was dedicated to a specific climatic region of the Soviet Union. A statue of Ivan Michurin was erected in the middle of the landscape complex.

The improvements built in the garden in 2017 and 2018 include natural stone and larch walkways, functional lighting and decorative illumination. New plants were also added. The garden currently numbers over 2,200 trees, including over a thousand apple trees of 13 different varieties.

The amazing system of flower gardens framing the historic pavilions and fountains was created for the exhibition's 1954 reopening. The parterres occupy a total area of around 170,000 square metres. The lawns and flowerbeds exceed 60,000 square metres.

The VDNH flower parterres were reconstructed in 2016 and 2017 using 1950s historical evidence. Some of the plants making up the composition are cone-shaped cedar, white canna, cotoneaster, maritime cineraria and alyssum. During the warm season, a veritable sea of tulips much enhances the visual experience.

The reconstructed parterres were voted the best project in the field of conservation and popularisation of cultural heritage sites in the Garden or Park Art or Landscape Architecture Sites category at the Moscow Conservation '2017 competition run by Moscow City Hall.

The Chestnut Grove, also known as Cosmonauts Alley, lines Central Alley along the Main Entrance Arch side. The first chestnut tree was planted here by the cosmonaut Pavel Belyaev. Belyaev dedicated the tree to the memory of his departed friends, the cosmonauts Yuri Gagarin and Vladimir Komarov. The tradition stuck: Belyaev's initiative gained a lot of support. Until well into the 1990s, every time a cosmonaut returned home from a space mission, they or their kin would plant a chestnut tree at VDNH.

The Oak Grove is part of the Ostankino Oak Forest, property of the Counts Sheremetev in the 18th century. The grove was merged with Dzerzhinsky Park of Culture and Recreation (now Ostankino Park) in the 1930s. A section of the grove became part of VSKhV grounds in the 1940s. The current layout of the Oak Grove, having shaped up by 1954, was incorporated into the rejuvenated VDNH in its entirety.

The prevalent tree genus in the grove is common oak. A mighty tree with a dense top and a formidable trunk up to 1.2 m in diameter, the common oak can grow as high as 40 metres. The tree is on the endangered species list. Many oaks in the grove are 200 years or older.

The cascade of ponds was built on the Kamenka River in 1803. The number, location and layout of the ponds have since changed repeatedly. The ponds were drained in the 1930s, then reconstructed for VSKhV. The Third and Fourth Kamensky Ponds were merged with the Exhibition, while the Second Pond remained part of Dzerzhinsky Park until 1954, when it, too, was added to Exhibition grounds.

The ponds were drained in 2018. Then—for the first time in VDNH history—they were cleaned and refilled with water. Eventually, an attractive site was built in this remote part of VDNH, complete with a beach, pontoon landings and recreational facilities.

Landscape Park at VDNH is an attraction in its own right. An eco project designed by celebrated French landscape architect Michel Péna and implemented in 2018,

the park consists of five themed sections, signifying the transition from wild to cultivated nature. The sections are Botanical Nature, Nature for Amusement, Wild Nature, Nature of Science and the Arts as well as Cultivated Nature. It was the designer's idea to complement the natural terrains with man-made facilities blending perfectly in with the landscape: playgrounds and sports fields, comfortable recreation facilities on the banks of Kamensky Ponds, art installations, bike rentals and cafés. The design won the Gold Certificate in the Best Turn-Key Design of an Urban Area category at the Russian National Landscape Architecture Awards in 2019.

The Lilac Garden is part of the Cultivated Nature section of Landscape Park. Planted in 1985 in honour of the 40th anniversary of Soviet victory in the Great Patriotic War, the Lilac Garden is home to some 30 lilac cultivars, some of them reared personally by the famous plant breeder Leonid Kolesnikov.

Arguably the best time to visit the Lilac Garden is late spring, when most lilac trees are in blossom. The walkways are paved with natural rock or concrete slabs, and there are comfortable benches for visitors.

Planted in the Nature for Amusement section of Landscape Park, the Green Labyrinth is a maze of firs, cedars, limes and apple trees. Each compartment of the labyrinth has an umbrella-topped plant in the middle. There are 16 genera of such plants in the labyrinth.

The area christened Big Picture of Fields in the Cultivated Nature section is a system of flower gardens forming a pattern inspired by Vasily Kandinsky's abstract paintings. The floral ornaments merge into a common composition of vast geometrical shapes, which come alive at the slightest breeze.

Another popular attraction on VDNH grounds is the Eco Trail, opened in 2019 for VDNH's 80th jubilee.

The trail is located in the Wild Nature section of Landscape Park. Following the boardwalk at a maximum elevation of 6.5 metres, you will sometimes find yourself walking right through the tops of age-old oaks, enjoying eye contact with the local inhabitants such as squirrels or owls. The trail is about 500 metres long. It is illuminated at nighttime.