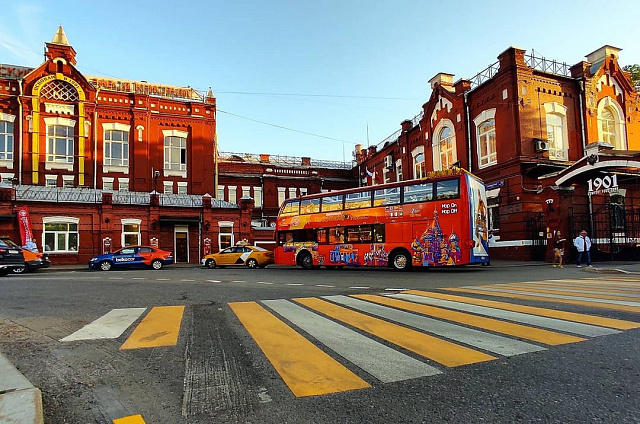 Today from 11:00
Buy tickets Route On map
About place

City Sightseeing operates the largest fleet of double-decker tour buses in the world. The company was established in 1998 in Seville, Spain by Enrique Maria Ybarra Valdenbro, a descendant of the old Andalusian family behind the world-famous Ybarra olive oil brand. City Sightseeing had a single bus, one tour and operated in only one city when it started. Now the company operates in over 100 cities in 30 different countries. The bright red open-top double-deckers are unbelievably popular among tourists all over the world. City Sightseeing's fleet of more than 1,000 buses carries more than 10 million tourists every year. In Russia, City Sightseeing is present in three cities—Moscow (since 2012), Kazan (since 2013) and St. Petersburg (since 2015).

The bright red double-deckers operated by City Sightseeing are really eye-catching—they are so vibrant, so modern and, most importantly, so very convenient! The routes are designed in such a way that you can see all the main landmarks in the city even if you have little time. You will also learn a lot about them, thanks to the multilingual audioguide recorded by a professional human tour guide. Our shtick is the hop-on/hop-off system. It allows you to leave the bus and get back on wherever and whenever you want, as many times as you need.

In Moscow, you can get on a City Sightseeing tour bus at any starting point depending on the route you are taking: by the Ilya Repin monument on Bolotnaya Square (Tretyakovskaya Metro station), across from the Bolshoi Theatre (by the Karl Marx monument) or on Arbat Street (by Praga Restaurant, Arbatskaya Metro station). Just be there by the departure time indicated on your ticket.

1. By the Ilya Repin monument on Bolotnaya Square (Tretyakovskaya Metro station)
2. Across from the Bolshoi Theatre (by the Karl Marx monument)

INTERVAL BETWEEN BUSES: 15 to 20 minutes

INTERVAL BETWEEN BUSES: 40 to 50 minutes