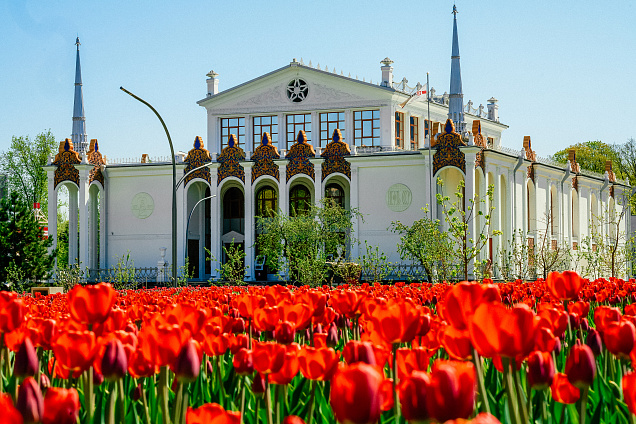 The Oil Pavilion is open to the public. You can buy tickets at the ticket offices of the pavilion.

The renovated Oil (Neft) pavilion will introduce visitors to the full production cycle of a vertically integrated oil company, from extraction to processing and sale. The centre's content and educational programmes are designed for a wide audience, from schoolchildren to industrial experts.

The pavilion is now housing an interactive educational centre about the history of Russian oil and the progress of Russian science and technology.

The biggest multimedia exposition about oil in Russia is divided into 4 themed sections: Man and Oil, History, Technology, and Science. The Centre's design employs the most advanced technology: VR and AR, a hologram theatre, modern phygital solutions that unite the digital and physical worlds. The exhibition includes interactive multimedia installations, game apps and unique animated movies. There is a multi-functional room with a study and movie area for all your educational activities.

Designed based on the project by A. A. Tatsii, I. M. Tamarkin and S. S. Ganeshin, in 1954 Pavilion No. 25 replaced the exposition building created by the architect I. Makaveev. Since it was dedicated to a branch of agriculture, it became an important element of Michurin's garden.

The eclectic composition of the pavilion combines features of classicism and traditional Russian architecture. The socle part of this two-floor pavilion is a gallery with narrow archways that make the building look higher. The façade and outer corner towers are decorated with inlays in the style of Russian terems (chambers in rich houses). The towers are topped with massive spires.

The side and the back walls of the pavilion have arched windows as a continuation of the rhythm set by the façade. A part of the wall under the windows is decorated with a relief in the shape of sugar cubes.

The second floor of the pavilion is topped with a classic pediment with a rosette window in the middle. The window has a star-shaped insertion and a prominent pattern of stylised beet leaves. Decorative vases highlight the corners of the pediment.

By its 10th birthday, the pavilion had been actively used for demonstration of accomplishments in heavy industry and won the medals Oil Derrick and Oil of the USSR, situated on both sides of the central entrance.

The White Beets exposition, for which Pavilion No. 25 was initially created, demonstrated the best practices of the USSR in beet farming. Here one could learn about new varieties of white beet and the industrial processing of it, about the fertilisers that helped increase the quality and yield, about the pesticides used and about the mechanisation and future of this industry. The small cinema hall showed educational films about beets. Apart from that, there was a plot of land near the pavilion with samples of various white beet varieties and a platform with machinery used in agricultural activities.

In 1956, the contents of the exposition were changed after it became a part of the All-Union Industrial Exhibition, and the pavilion got a new name—Sugar.

In 1958, it housed the exposition Geology, Oil, Gas, although a year later, the first sector was taken away from it entirely, and later, it was transformed into the Fuel Industry exposition.

Pavilion No. 25 got its current name, Oil Industry, in 1964. Now its contents reflect the industry of extracting, transporting and processing oil. The demonstration platform next to the pavilion featured models of oil derricks and various machinery used in the automatisation of the oil industry. In the 1990s, the pavilion was closed.

From 2018 to 2019, the pavilion was under reconstruction, returning it to its 1954 appearance, including the spires and stucco on the façade. At the moment, the renovated building hosts the exposition of the Interactive Educational Centre, Oil pavilion. It describes the history of Russian oil and the progress of Russian science and technology.