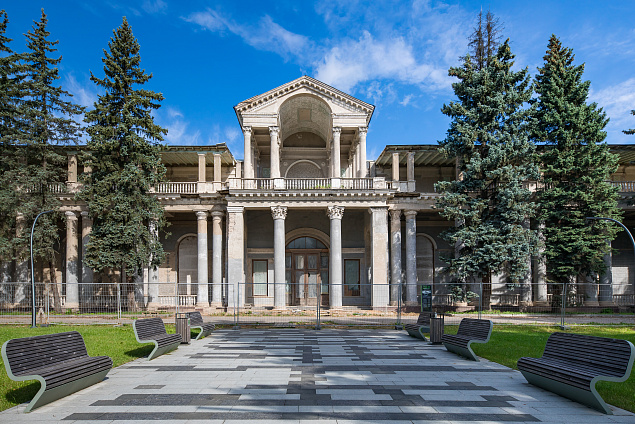 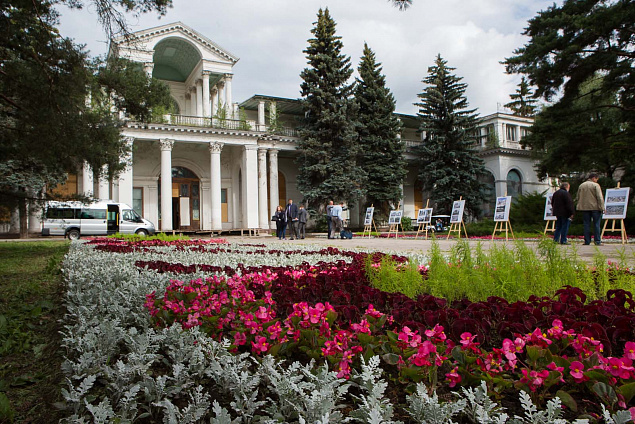 In the 1970s, the restaurant Zolotoy Kolos was so popular that tables had to be booked 6 months ahead. Many celebrities and delegations from other countries ate here.

The restaurant was built in 1954 by the architect A. V. Efimov.

The main façade of the restaurant is a cultural heritage object of federal importance.

According to the first general plan of the All-Union Agricultural Exhibition, they planned to build several cafés and restaurants on the shore of the Central Pond, which were created in the mid-1920s to early 1930s. The building of the Main Restaurant, finished in 1937 according to a design by G.Ya. Chaltykin, was situated on the same axis as the Pavilion Mechanisation and connected to it by an alley of shops, drinking establishments and kiosks. The building of the restaurant had one floor, with galleries leading away from the round central space. Its playful architecture resembled the Chinese-style pavilions popular in the French rococo.

In 1954, the restaurant was given a very poetic name—The Golden Spike, in addition to a more majestic appearance. Its snow-white colonnade porch with terraces and a lightweight decorative portico made the building as airy as the best examples of southern architecture. First, guests found themselves in a huge hall decorated with artificial marble. Its key feature was its domed roof, one of the most beautiful of the interiors of the Exhibition. It has been preserved perfectly to the present day.

On the first floor, there were two restaurant halls for 180 persons each. Both were lit with crystal chandeliers. Amazing oak and walnut furniture and mirrors added to the general atmosphere of luxury. Unfortunately, they were lost during the 1990s.

Two symmetrical exterior staircases led to the upper terrace. The terrace had a capacity of 200 persons and featured buffets. Under the central portico, there was a dance floor with an orchestra pit.

The restaurant was supervised by the Head of the People's Food Committee of the AUAE, who managed all food service locations at the Exhibition. Over 400 employees worked at the Main Restaurant. Initially, it was designed to only work in the summertime, but once VDNH USSR was established, the restaurant started accepting visitors all year round. Back then, The Golden Spike was considered to be one of the most prestigious restaurants in the city, alongside the Praga and Moskva. In 1954, there were about 40 items on the menu, and in that year, they cooked 17,000 portions of food in total.

The half-dome of the restaurant is designed to resemble the altar at the Temple of Venus and Roma in Rome, a popular reference in the early 19th-century architecture. It offers a stunning panorama of the Exhibition.