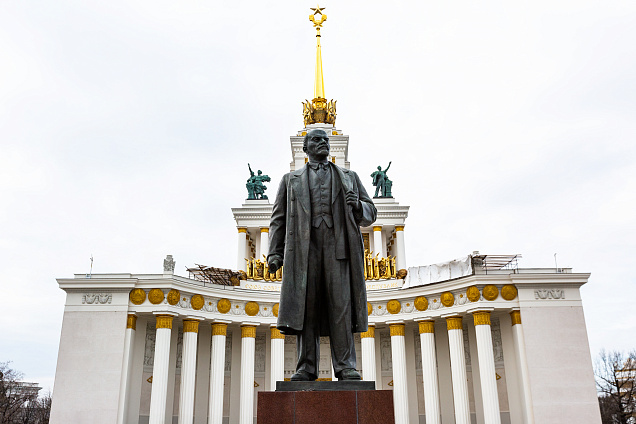 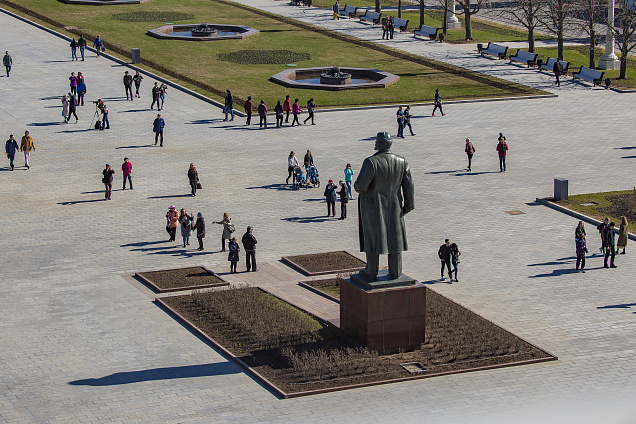 This sculpture by P.P. Yatsyno is an example of Soviet monumental sculpture of the early 1950s and is one of the sculptor's own replicas.

In July 2016 the monument underwent extensive restoration. At the initiative of the Department of Cultural Heritage of Moscow, it was cleaned of oxides forming a natural patina and fouling caused by pollution and other human activity. In addition, the patina on the sculpture was thickened, and the granite pedestal was cleaned of soot and thick layers of atmospheric deposits. Previously, the monument had only been washed and no work of such a scale had been done before.

The History of its Creation

The monument to Vladimir Lenin, the founder of the Soviet state, is situated on the Central Alley near the Central Pavilion in front of the Main Entrance of VDNH. This sculpture by P.P. Yatsyno is a fine example of the Soviet monumental sculpture of the early 1950s.

It is interesting to note that the sculpture of Vladimir Lenin was originally located on a pedestal to the left of the entrance to the pavilion, in symmetry with the sculpture to the right of Joseph Stalin by A. Kibalnikov. In 1961, following the decision of the 22nd Communist Party Congress to dismantle all the monuments to “the father of the people,” the statue of Lenin was incorporated into the exposition of the Central Pavilion, where it was located until 1967.

That year, on the 50th anniversary of the October Socialist Revolution, the monument was placed where we see it now — in front of the Central Pavilion. Following a design by the architect R.R. Gasparyan, a new pedestal was made right on the central axis from the pavilion's portico. It was made of granite blocks which had previously served as the bases for the figures of both leaders. The cube, resting on a slight elevation, slightly impeded the view of the pavilion, but it blended in well with the surroundings.

The figure of the leader is full of poise, determination and quiet grandeur. Lenin's face is turned towards the future, without any spurious hint of facial movement or emotion, expressing the noble majesty of the Soviet state, which was characteristic of official portraits of statesmen made in the traditions of Classicism and Socialist Realism. His figure is firm and somewhat heavy. The impression is slightly alleviated by the dynamism of the detailing which attracts with its realism and the high level of craftsmanship.

Other places
Monument Memorial to the All-Union Agricultural Exhibition Workers Who Died on the Fronts of the Great Patriotic War of 1941–1945. Monument Monument to I. V. Michurin
В подборке
Открыть мою подборку