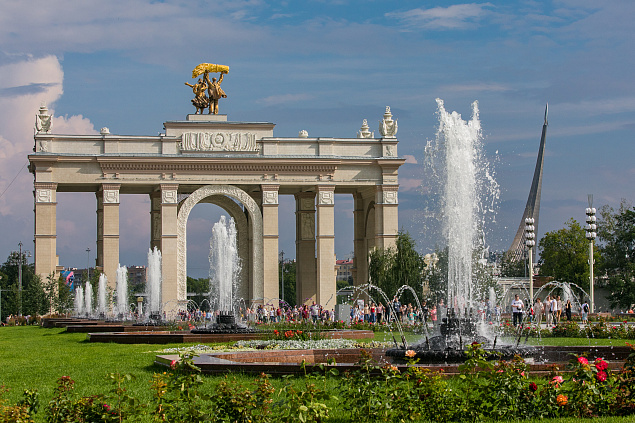 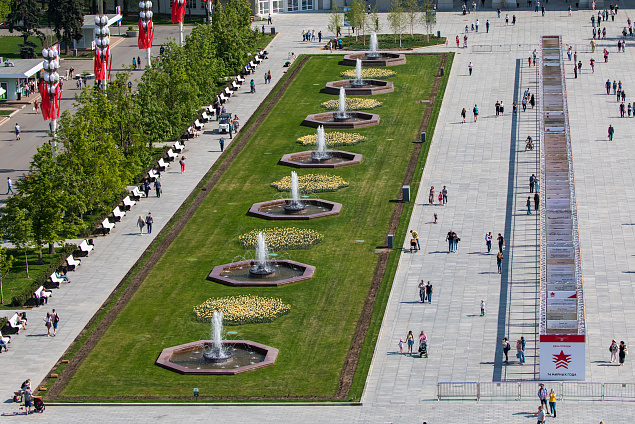 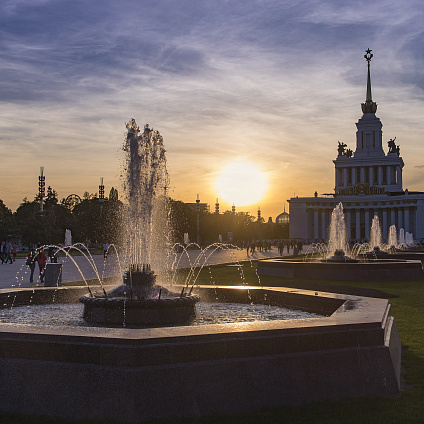 The 14 fountains on the Central Alley

There are 14 fountains between the Main Entrance Arch of VDNH and Pavilion No. 1, Central (7 fountains on either side). Each fountain sits in a separate bowl, most often plated in red polished granite. The bowls are all shaped like regular octagons. Each fountain has 12 vertical and 12 radial jets, the latter fanning out from the middle.

The fountains were built in 1954 for the opening of the National Agricultural Exhibition. Architects: Yu.V. Shchuko, V.M. Kuranov.

The Central Alley fountains were built in 1954 for the opening of the National Agricultural Exhibition. Architects: Yu.V. Shchuko, V.M. Kuranov. These are the first fountains you see when you enter VDNH through the Main Entrance Arch. Ground lamps were set up in the corners of the lawns. The repairs that were carried out as part of fountain maintenance changed their look for the worse. Late last century, the lawns on each side of the parterre were merged as a place to hold flower festivals. The remnants of the historical lighting were removed in the early 2000s. By the time the renovation began, the wear and tear on the engineering equipment was estimated at 80% or more.

The renovation was completed in the summer of 2018. Just like in 1954, the fountains once again became a great decoration of the exhibition grounds. 13 out of the 14 original fountains were recreated. The bowl of one fountain was found to be in satisfactory condition and was preserved. The plating slabs, for the most part, were in good enough condition, and those that had minor damage were restored. A small number were replaced. The bottom of the bowls had granite tile plating. All the engineering and pumping equipment was replaced as were the pump stations. The cast-iron elements of the fountains were restored. The central jets are 6 metres high. Modern lighting equipment was installed which has been developed from the original historic lighting. The renovation was based on the 1954 design and was integrated into the modern VDNH development concept.