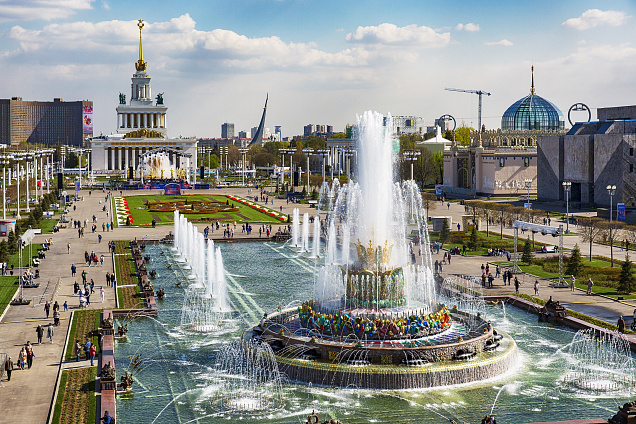 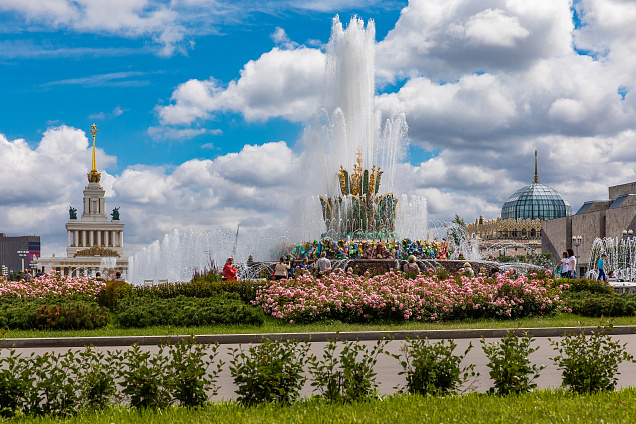 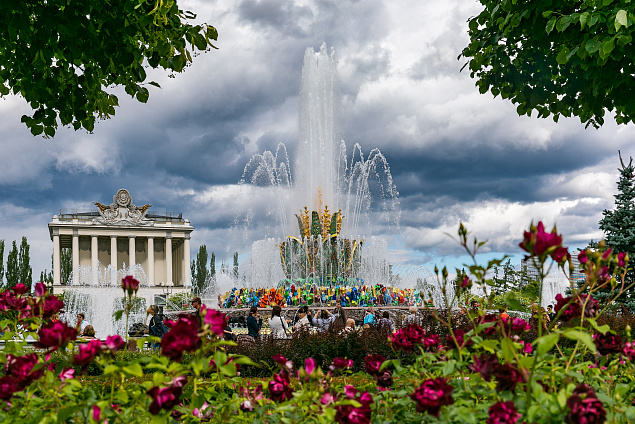 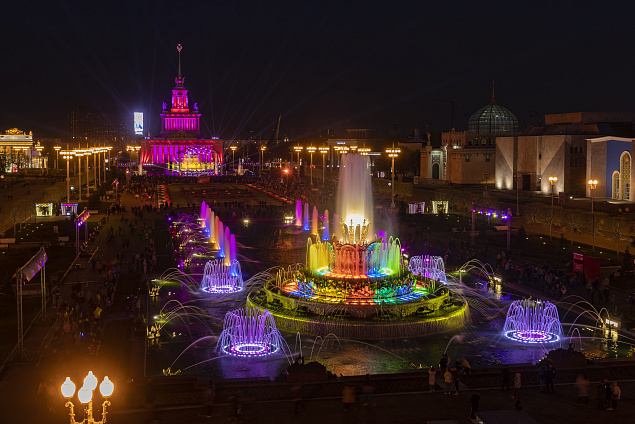 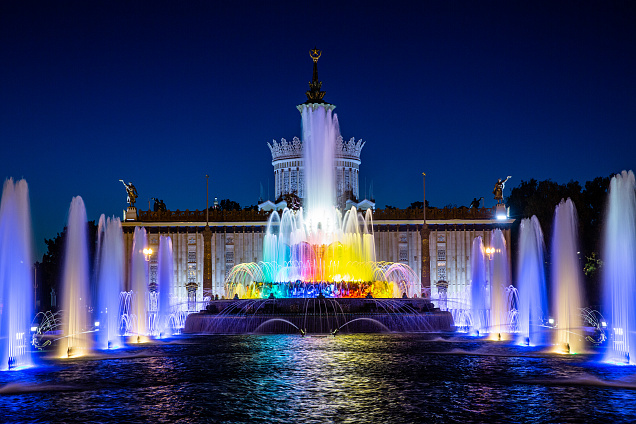 The Stone Flower fountain is one of the four most famous historic fountains at VDNH. The fountain is inspired by the bright images from P.P. Bazhov's Tales of the Urals and is replete with coloured smalt and gorgeous sculptural details. At the centre of the fountain, there is a large bowl shaped like a flower blooming among gems. 16 bronze still life compositions representing the gifts of nature from each of the Soviet republics are placed on granite pedestals.

Since April 2019, Moscow residents and visitors to the capital have been able to see the Stone Flower the way it was intended by the original designer, Konstantin Topuridze. After the renovation, the fountain will be stronger and brighter, just like it was on the day of its launch in 1954.

In 2018, before the renovation started, the Stone Flower had been in a rundown condition. Several decorative pieces were missing. In certain sections, only 25% of the vitreous enamel had survived. Due to the long-term deterioration of the pumps, the fountain was operating at less than half of its capacity, with many water jets out of commission.

The historically accurate colour scheme of the fountain was recreated. In 1954, two types of smalt were used to decorate the fountain: coloured marblite made of opaque glass and multi-coloured cantarella made of sheets of gold of different shades. While those decorations were being dismantled, restorators were able to preserve some 30% of the original smalt. The rest was manufactured in Moscow and Saint Petersburg using the preserved original pieces as the prototype. The total weight of the smalt used in the fountain is about eight tonnes.

All the equipment inside the fountain was repaired. 11 new pumps were installed to replace the five old pumps. This changed the height of the fountain jets from the seven or eight metres to the historically accurate 15 metres.

The Stone Flower fountain came about from the design of the new Main Fountain of the exhibition that was to be called the Sheaf. The fountain was supposed to be the main decoration of the new All-Union Agricultural Exhibition that was under construction at the time. It was intended to express to visitors the successes in the restoration of the country after the Second World War through the friendship of peoples in the ethnically diverse country, close cooperation between collective farmers and workers and the successful use of the discoveries of Soviet science.

The fountain was designed in the classical style as an element of the mid-20th century manor estate complex.

The early 1950s design by the architect K. Topuridze and the sculpture by P. Doprynin were so bold and complex that it soon became clear that actually building them could prove far too difficult. Just think about it: a huge sheaf of all the main agricultural crops was to be placed on the top tier of a multi-tier cascade, while stylised dolphins were to be placed at its base. One sketch for the design shows the stems of the agricultural crops looking like cattle heads. The mid tier featured a round dance of 16 girls representing the Soviet republics, and the lower tier had bas-reliefs and shells made up of water flowing from the mid tier. And that was just the main set of sculptures. The sides of the bowl were to be adorned with 16 still lifes symbolising the diversity of agricultural crops grown in every republic. The names of the republics were to be inscribed on the granite base of each still life. On the inside of the sides, there were 16 groups of geese. 32 sturgeon would be 'swimming' in the bowl itself.

Seeing how overloaded the design was, the authors figured there was enough stuff in it for two fountains rather than one. The problem was that construction had already begun and the girl sculptures had already been delivered from Leningrad to Moscow. The octagonal square that had appeared by 1952 in front of the Main Pavilion, and that was supposed to look like an amphitheatre for mass gatherings, was just the place for another fountain, as there was suddenly no need for its original intended purpose. So a decision was made to build another fountain, and some of the elements were moved to it. That new fountain ended up as the Friendship of Peoples Fountain.

Since the main sculptural composition of the fountain moved, a new idea was needed for the freed-up space to tell about the great wealth of the country and the development of various agricultural industries. At around about the same time, a new film was released based on P. Bazhov's fairy tales, so inspiration was drawn from that.

A budding stone flower was to be placed at the top of the central sculpture. Its petals are adorned with unique pictures made from golden cantarella and smalt in all sorts of hues. The crystals found at the base of the flower highlight its man-made beauty with their shapes and colours. That's how far the main sculptural and design differences between the two fountains go. That's why no new fountain design was ever created. Rather, work continued based on the drawings in the existing working documentation with nuances being refined as construction proceeded. This allowed the fountain to be finished in significantly less time.

The results exceeded all expectations. Both Moscow residents and visitors liked it a lot.

Unfortunately, to a large extent, the fountain followed the same historical path as the country. The smalt and cantarella were soon darkening and peeling off. Pieces small and large were soon falling off of the sculptures. The pipes were rotting and the pumps began to break down. Despite all that, the fountain was kept in operation through the heroic efforts of the people who maintained it until the renovation that began in 2018.

Experts estimated that by the time the renovation started, some 75% of the smalt and cantarella covering the flower, the crystals and other plating elements had been lost or were in bad need of replacement. All the engineering systems and pumps had to be replaced as well.

As a result of the renovation that was completed in the summer of 2019, the Stone Flower fountain was returned to its historical look. The restoration experts managed to put some 20% of the original smalt back in place as well as 70% of the granite plating of the flower, and of the side plates of the bowl, only 2 were replaced.