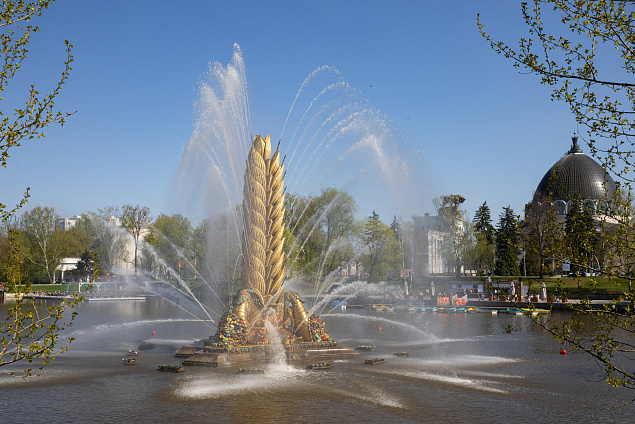 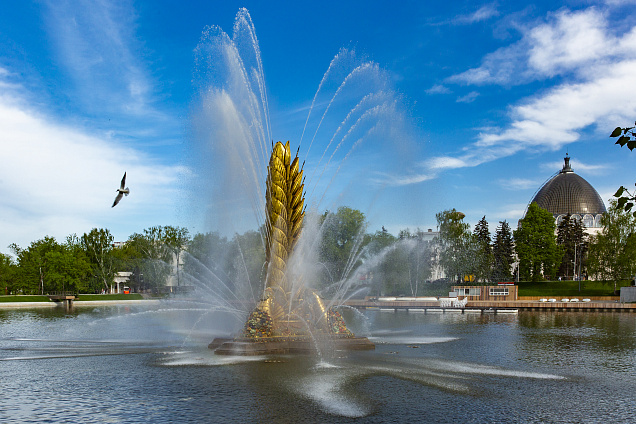 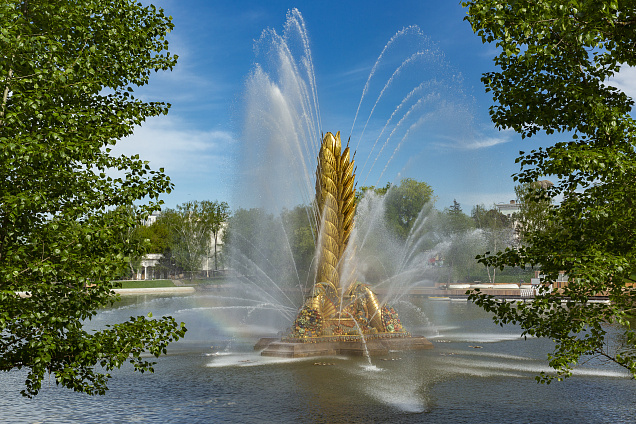 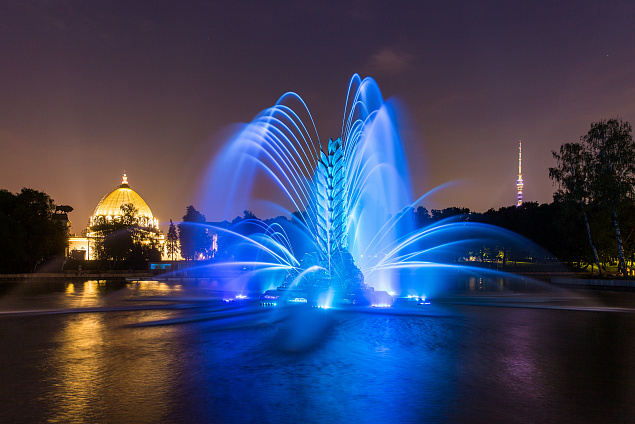 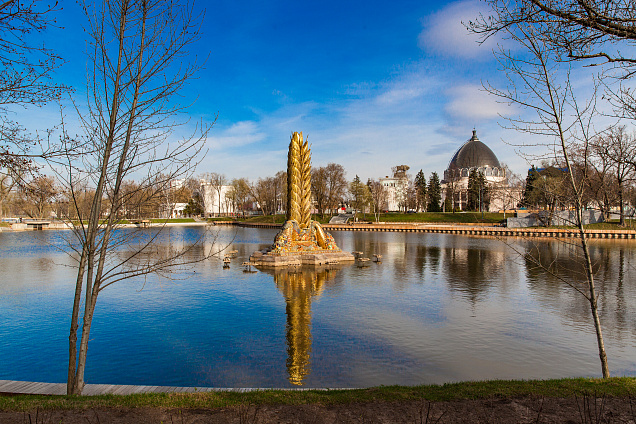 The Golden Ear fountain is the third largest historic fountain at VDNH. It's situated in the middle of Kamensky Pond No. 3 in the exhibition's Landscape Park.

The Golden Ear towers over a flat foundation, and there are three cornucopias at its foot with vegetables and fruits such as cabbage, melon, tomatoes, apples, grapes etc. The symbolism of the fountain is pretty obvious: ears of plants have since time immemorial symbolised revival, life, crops and fertility.

The Golden Ear is regarded as the most spectacular fountain at VDNH. It has 66 jets of water. 30 of them reach 25 meters in height.

The fountain was relaunched on 15 July 2018 following a comprehensive renovation. Prior to that, it didn't work for 30 years. Thanks to competent historical work, the composition's 1954 appearance has been restored. The fountain has been adorned with golden smalt tiles made from opaque stained glass. Restorers managed to form 83.89% of the total area of this material into sculptural elements. In addition, the technicians upgraded all the internal equipment of the fountain, all the pipping and water supply systems were replaced.

The Kamensky Pond, above which the Golden Spike rises, has also been put into order. It was cleaned for the first time ever. As a result, the depth of the pond increased by 0.79 metres—18 thousand cubic metres of silt and clay were removed from it. In addition, the bridge for feeding fish has been renovated.

By the official opening of the National Agriculture Exhibition on 1 August 1939, an alley was built across the entire territory from Collective Farms Square (now the Square of the Friendship of Peoples) all the way to the ponds area where visitors could get a great panoramic view of the beautiful ponds.

The architect I. Petrov, who later would go on to create the Botanical Garden of the Russian Academy of Sciences, another magical place, took part in designing the fountain and the adjacent territories. The elegant Ear Fountain was made from copper sheets, which set it apart from the white pavilions situated on the shores of the pond. The first Ear Fountain barely made it to the Great Patriotic War (WWII), the copper sheets darkened and crumbled, so, in 1949, the fountain was dismantled.

The Ear Fountain in the ponds of the National Agricultural Exhibition.

When the National Agricultural Exhibition was undergoing a massive renovation in 1950–1954, it was found that the fountain was in critical condition, so a decision was made to not simply replace the old structures but to go ahead and build a completely new fountain. There were some very good reasons for that, seeing how the scale of the other structures at the exhibition had changed and the old fountain was in a very bad state of repair. The new fountain, shaped like a giant ear, was 16 metres tall and was intended as a triumphal column of socialist agriculture. It was designed by the chief fountain designer K. Topuridze. It was K. Topiridze and G. Konstantinovsky who also designed the legendary Friendship of Peoples Fountain.

Just like the Stone Flower fountain, the Golden Ear was made from reinforced concrete elements plated in malt of various hues. Huge cornucopias, covered with multicoloured glass tile and trimmed with grey granite, were placed on the foundation. And if we look at the plan of the fountain from the top, then along with the pedestal, it looks like a six-pointed star, which allows for the broadest possible interpretation of the symbolism of the fountain. It was no coincidence than in his books on the architects of the National Agricultural Exhibition, A. Zhukov stressed the link between the new Ear and the pavilions surrounding it, among which the chief architect of the post-war exhibition highlighted Pavilion No. 36, Water Industry, as one that was intentionally made to look like an ancient Egyptian temple.