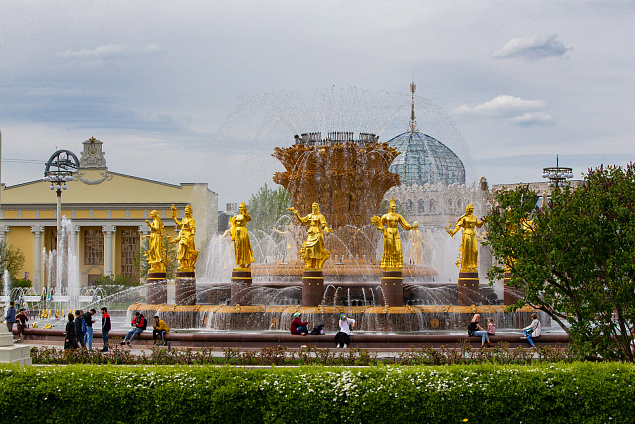 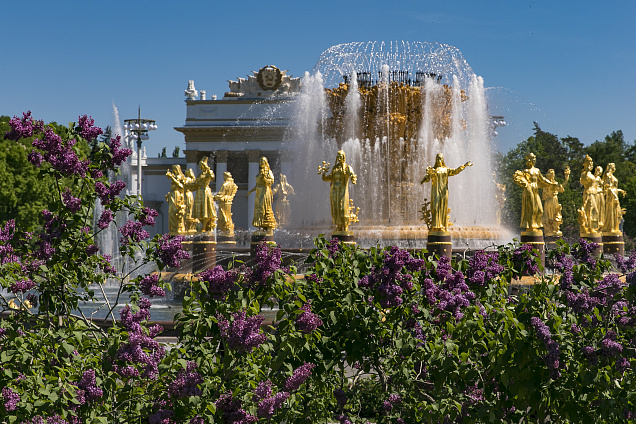 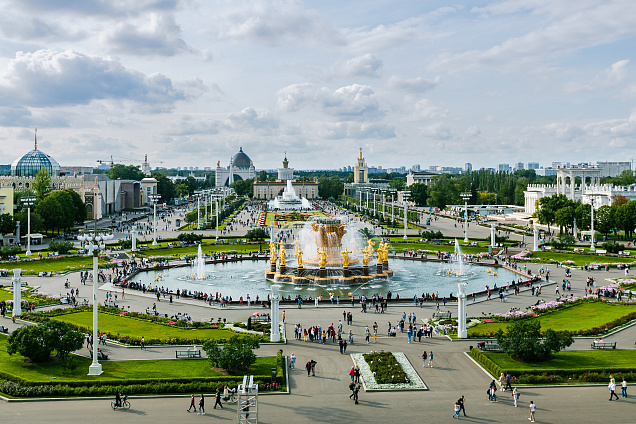 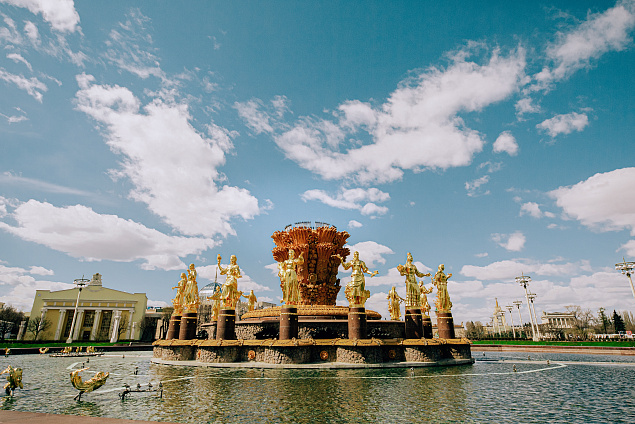 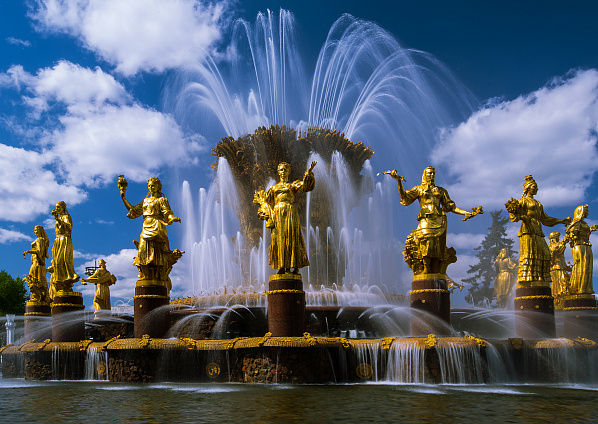 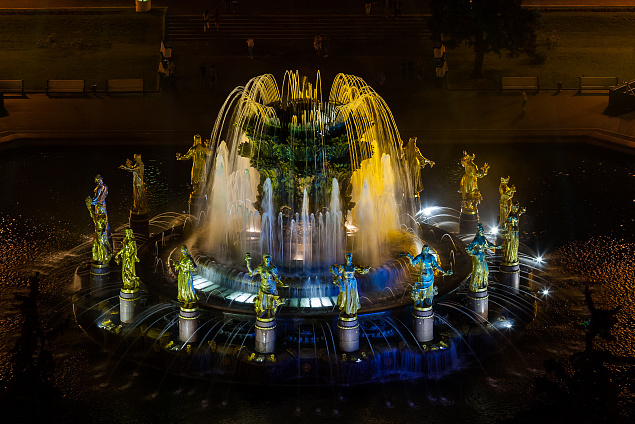 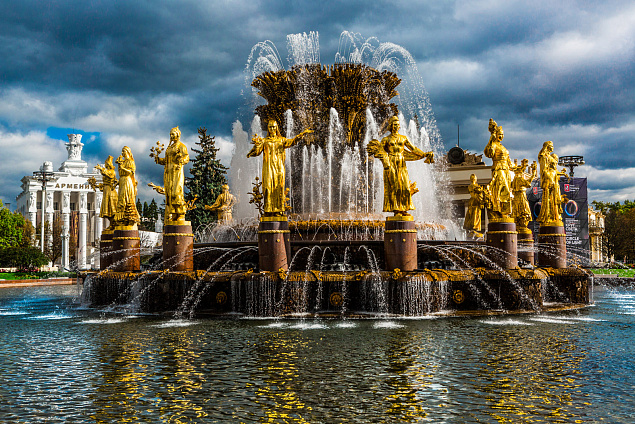 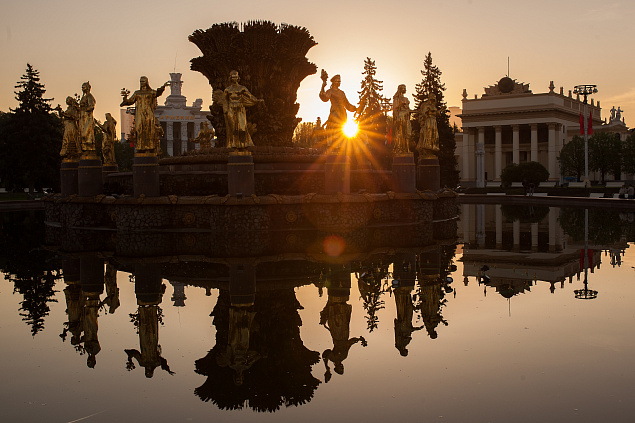 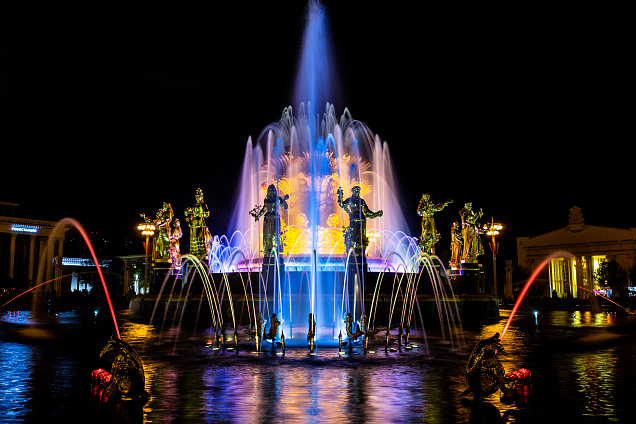 The Friendship of Peoples Fountain is one of the symbols not only of VDNH but also of Moscow. It comprises several parts. The oval bowl of the fountain is topped off with a golden sheaf of wheat, industrial hemp and sunflowers.

Around the sheaf, there are 16 gilded statues of girls symbolising the Soviet republics: their number sixteen corresponds to the number of the administrative units that the USSR consisted of at the time the heritage site was created. The girls each hold in their hands the agricultural plant that was most often grown in their corresponding republics. You can learn about each one of the golden beauties from our material.

The unique architectural site underwent a comprehensive renovation from October 2018 through April 2019 for the first time in 65 years. Restoration experts and construction workers took about six months to upgrade the waterworks of the fountain, strengthen the supports of the frames and structures as well as renovate the decorative elements.

The fountain is a highly complex system consisting of 784 jets that shoot water as high as 20 metres. The fountain's reservoir has an area of 3.8 thousand square metres.

The Friendship of Peoples Fountain is located in the south-east oval part of the large square of the same name (prior to 1954 the square was called the Square of Collective Farms), serving as one of its dominant artistic and semantic elements. Originally, during the national agricultural exhibition of 1939, the spot was taken up by a children's café and a part of the southern recreational area that comprised several small pavilions. The post-war renovation of 1949–1954 envisioned the construction of new republican pavilions so a decision was made to build them along one central axis that would visually connect Meschanskaya Street (Peace Avenue) and the national agricultural exhibition. The old wooden pavilions were torn down and a square for holding demonstrations was planned out for the freed-up territory.

In the upgraded plan developed under the supervision of A. Zhukov and R. Kliks, this part of the exhibition was envisioned as consisting of three lines meeting at one point. The point would be the location of a new monument to Joseph Stalin that was supposed to be put up on the spot where the flower parterre of the Stone Flower fountain begins today. It was right in front of this monument, which was supposed to face the main pavilion, that there was supposed to be an octagonal ellipsoid square with a lower central section reminiscent of a Roman arena. Construction was already underway when the Arts Council of the National Agricultural Exhibition concluded that this type of mass-gathering spot made little sense, so instead, it was decided to put another major fountain there. The new fountain was based on the design of the first main fountain being constructed in front of the Ukraine pavilion at the time. The original fountain, which was demoted from the first tier to the second tier, was then redesigned by the same authors, K. Topuridze and G. Konstantinovsky, and that was when it bloomed into a stone flower.

The fountain's architecture fit in very well both with the layout and the overall image of the exhibition. The Friendship of Peoples Fountain has a look that harkens back to the famous fountains of the 17th and 18th centuries. The terraced octagonal bowl of the fountain is topped off with a golden sheaf of wheat, industrial hemp and sunflowers. It is surrounded by 16 bronze figures of girls symbolising the 16 Soviet republics that made up the USSR at the time. Real young women from the corresponding republics posed for the sculptors. Today, we only know the names of three of those models: the Estonian ballerina and actress Virve Kiple-Parsadanyan, the Turkmen pianist Gozel Annamamedova and the wife of the poet Mikhail Svetlov, Rodam Amiredzhibi, who represented Georgia.

The girl representing Russia is looking at the main pavilion and holding a sheaf of wheat in her hands. Next to her are her two Slavic sisters, Ukraine (the girl with a wreath on her head) and Belarus (the girl in a headscarf who's holding the branch of an apple tree in her hand). The sixteen figures are positioned deliberately as they all stand in pairs that correspond to the sequence of the bands in the coat of arms of the USSR: starting with Ukraine and Russia, framing the slogan 'Proletarians of All Nations, Unite!', and continuing from there.

In addition to national allusions, there are some obvious mythological ones as well. The resemblance of the girls to Demeter, the goddess of fertility and the patron of agriculture, is clearly intentional as the Soviet art of the 1930s to 1950s followed the aesthetic ideals of classicism.


Constantine Topuridze was a great connoisseur and interpreter of classical art, so when he was working on the Friendship of Peoples Fountain, he was clearly following in the footsteps of the masterpieces of the reign of Peter the Great: you can clearly see the resemblance to its prototypes at Peterhof, down to some elements, such as the dolphins, that were practically copied. It is interesting that it took the fountain's authors some time to arrive at the concise solution of combining red granite and gilded bronze, because originally, all the figures except the sheaf were envisioned as polychromic, i.e. they were supposed to be plated in coloured smalt. However strange it may seem, back in 1954, the authors' decision to go with the classic style came in for a lot of criticism, with some dismissing it as 'a cheap piece for plebeian merchants', 'the 16 samovars' and the like. Recognising the artistic success of the authors of the fountain, the Soviet art critic V. Tolstoy noted, 'The figures of the girls are devoid of any decorative or monumental traits that would be indispensable to help audiences perceive them in an outdoor environment of such a vast, imposing size. <...>They lack any plastic expressiveness in form and, seeing how they are covered in gold, any sense of plastic volume that they might have possessed has been taken away as they now glitter in the sun. All their national uniqueness has thus been negated and the figures themselves, that were supposed to be united in dance, now look isolated from each other. The result is that what was originally the very solid poetic idea behind the Friendship of Peoples Fountain was consigned to a rather lacklustre execution.'

Some people believe the fountain was inspired by Stepan Pimenov's 1809–1816 Guryev dinnerware set: his porcelain figurines were reminiscent of ancient goddesses with some ethnic features in the clothes and accessories as well as the characters of Aleksey Venetsianov who was active around the same period. Unlike contemporary scholars, the artist looked for inspiration for his image of ideal female beauty among peasant women. Against the backdrop of the realistic Russian landscapes, the semi-mythical characters he created, those ancient goddesses in ethnic ceremonial dress, plough the earth and then rest in the shade of trees in poses recalling those of Titian's beauties.

The positions of the figures follow the coat of arms of the USSR which was itself based on the list of the Republics in the 25 February 1947 edition of the Constitution of the USSR. In it, the Soviet republics are arranged by population size (The Russian Soviet Federative Socialist Republic, Ukrainian SSR, Belorussian SSR, Uzbek SSR, Kazakh SSR etc.). The figures representing the republics in the fountain were arranged in the same order, except that they alternate left to right. The only exceptions are the Moldovan SSR and the Kirgiz SSR—for some mysterious reason these were swapped.