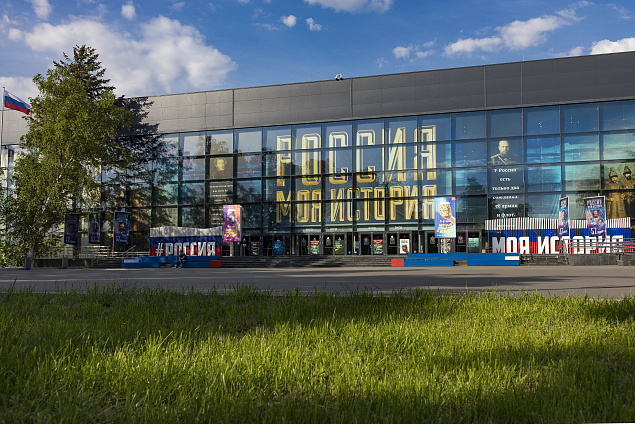 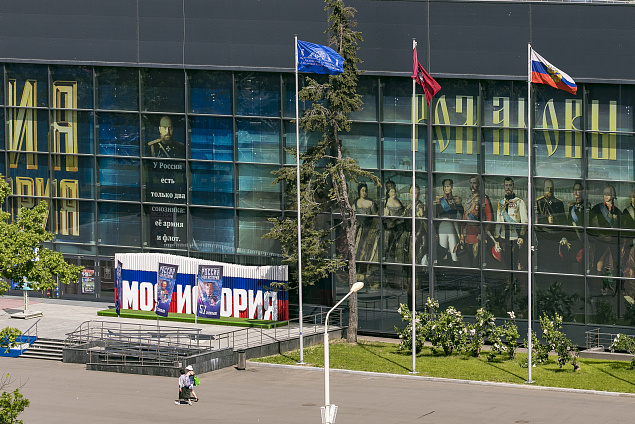 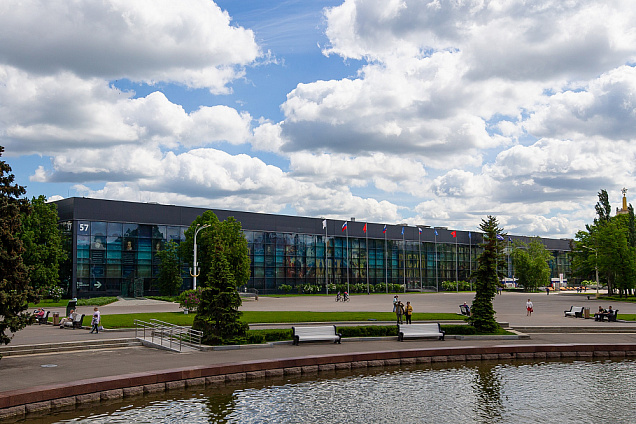 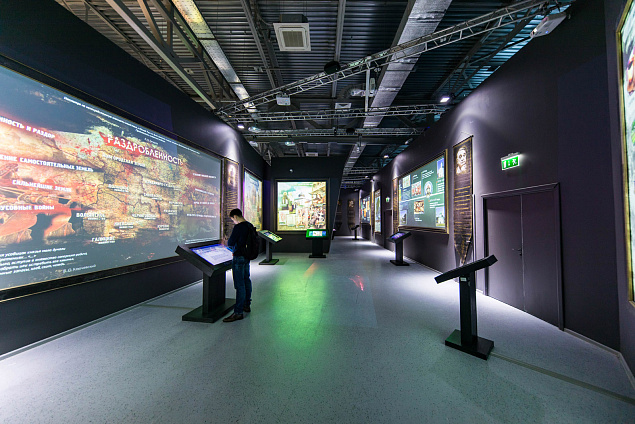 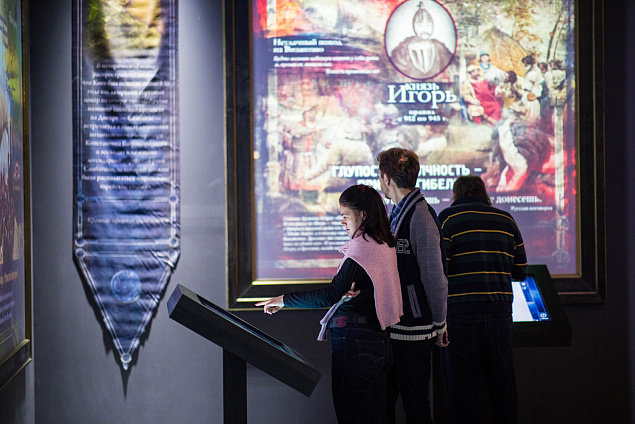 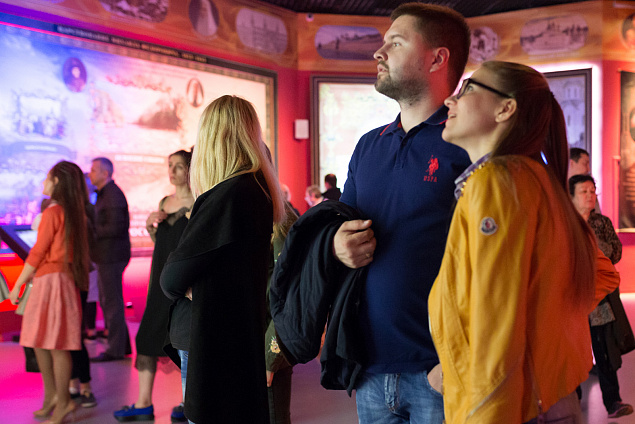 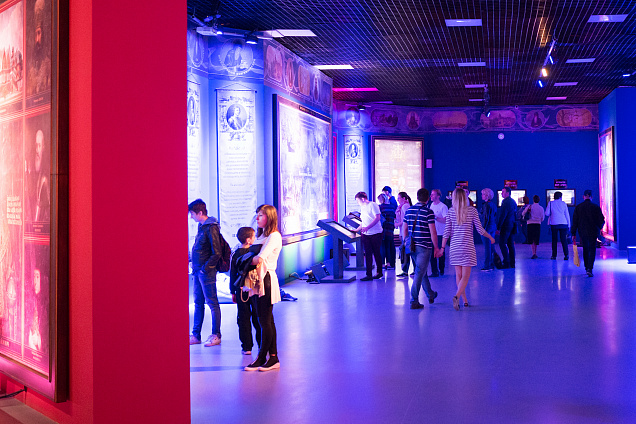 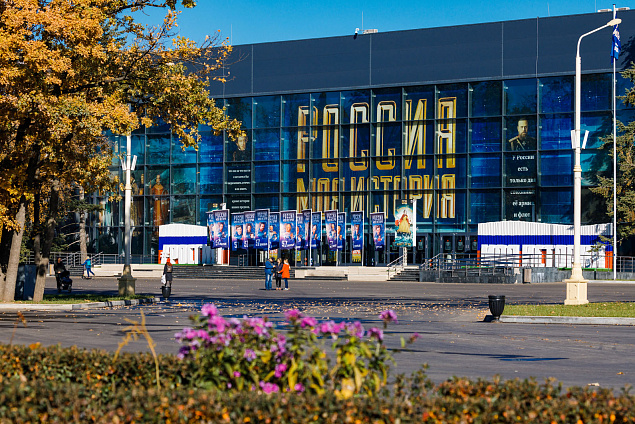 Pavilion No. 57. Russia Is My History

The Russia – My History Historical Park is open from 11 am to 8 pm on Friday, Saturday and Sunday.

Russia – My History Historical Park is a multimedia education and exhibition complex that highlights important milestones in the establishment and development of the state and culture in Russia.

In the 1960s, it was known as the Consumer Goods Industry. It was later renamed the Pavilion of Intersectoral Thematic Exhibitions No. 1 until 1992.

The Russia – My History Historical Park is housed in Pavilion No. 57 on Square of Industry. The pavilion was renovated in 2015 for the launch of the new museum. As part of the renovation project, the facade glazing of the building was completely replaced, the utility systems were upgraded and the facilities of the pavilion were renovated and adapted for modern museum uses. The renovation increased the pavilion's floor area by 6200 square metres, now totalling 27,786 square metres.

The Russia – My History Historical Park includes four multimedia expositions: 'The Ruriks', 'The Romanovs', 'The 20th century, 1914–1945: From Great Turmoil to the Great Victory' and 'The 20th Century: 1945–2000'. The first three expositions were previously showcased at the Manege with great success. The expositions make use of modern museum presentation technologies, including holograms, interactive touch screens, a projection dome, video panels with 3D historic reconstructions and audio guides.

The historical park is designed to accommodate up to 5 thousand visitors at a time.

To purchase discounted tickets, visitors must present relevant documents at the ticket offices to confirm their eligibility.

According to the first general plan of the Soviet National Agricultural Exhibition, the Soviet farming pavilion was supposed to be built on the eastern boundary of Agriculture Reform Square (Mechanisation Square since 1939 and the Square of Industry since 1959). It was supposed to be designed by the chief exhibitions committee workshop based on a sketch by V. Fiman. However, the construction of the building had almost been completed in 1939 when it was entirely rebuilt according to a design by V. Vlasov for the Grain exposition.

In the early 1950s, the pavilion underwent a major renovation. Under the supervision of A. Zhukov and A. Graves, it was redesigned in a classical style, replacing the original straight architectural facade lines. The small round courtyard in front of the building entrance was shielded from the square by a colonnade with a small portico.

This elegant piece of Soviet neo-classic architecture was demolished in 1966. It was replaced by the large Consumer Goods pavilion designed by architects I. Vinogradsky, V. Zaltsman, V. Doktorovich and design engineers M. Berklide, A. Belyaev and A. Levenshtein. The grandiose new structure featured massive glazing that stretched practically from the middle of Square of Industry to the pavilions at the end of the People's Friendship Square, becoming one of the largest exhibition pavilions at VDNH.

The Grain exhibition focused on the functions of the numerous Soviet state-owned and collective farms. It displayed information about how issues related to draughts and poor harvests were being addressed by research institutes. It also demonstrated the well-stocked grain supply available for food production companies and the population of the USSR. There was a special area in the back of the pavilion that showcased 300 of the best grain samples. Exhibition visitors were also able to see examples of the vegetation houses and machinery used in the production and processing of grain.

In 1956, the national industrial exhibition was moved to the premises of the national agricultural exhibition. In its place, the pavilion housed an exposition on consumer goods manufacturing. The exhibits showcased new types of equipment and materials used in clothing and footwear manufacturing, as well as domestic items manufactured using cutting-edge technologies. The exposition particularly focused on the manufacturing of clothing from synthetic materials, especially artificial furs. The topic proved to be so extensive that Pavilion No. 62 also began to display related expositions in 1964.

In the late 1960s, a new building was constructed on Square of Industry and named Consumer Goods. The new pavilion hosted exhibitions and presentations of various industries of the national economy, which later allowed Pavilion No. 57 to become a venue for thematic intersectoral events. In the 2000s, the pavilion hosted the Golden Autumn agricultural exhibition.