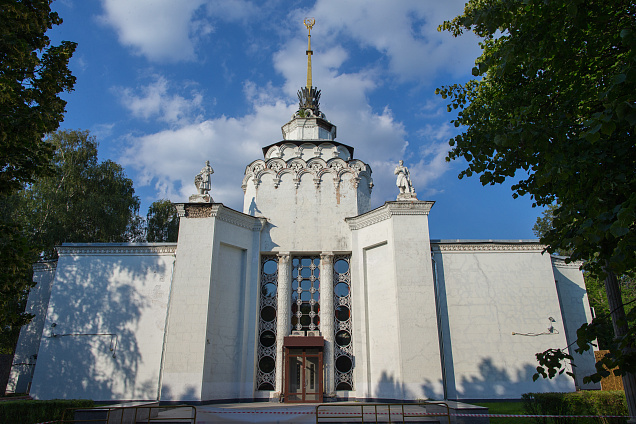 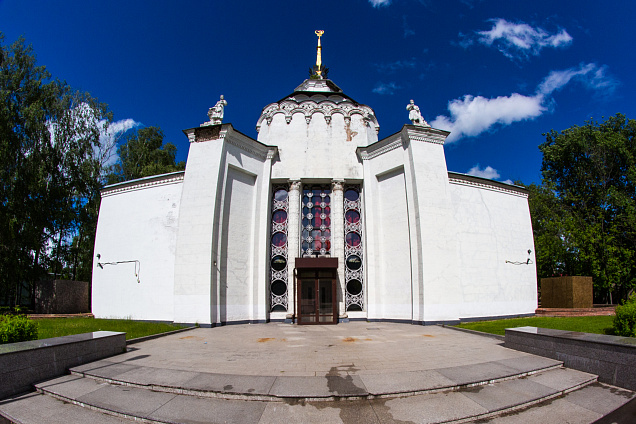 This snow-white building has been designed in the art deco style. Once the restoration works are complete, this pavilion will be converted into a culture and leisure facility.

The pavilion was built in 1954 and designed by architects R. R. Kliks and B. S. Vilensky.

The initial purpose of the Tsentrosoyuz Pavilion at the All-Union Agricultural Exhibition was to highlight the importance of consumer cooperation, which was meant to build up and develop a flow of goods between urban and rural communities.

The building is located not far from the Exhibition's central squares (right behind the Pavilion No. 57); its main façade is facing one of the peripheral pathways. The snowy-white structure is crowned by a tent-like tower in the centre, which is adorned with numerous kokoshnik elements and a gilded spire on top. The sculptures to the tower's left and right symbolise the unbreakable bond between the working class and the kolkhoz farmers.

The pavilion stands on top of an elevated terrace, bordered by unique fountains that approach the façade's corners. The fountains are shaped like giant spheres, formed by intricate ceramic patterns.

Starting from 1954, the pavilion's exhibition spaces told success stories of the best consumer cooperation organisations from all over the union. The exhibits in the first room illustrated the structure of consumer cooperation, as well as its resource base and turnover grown. The second room shared methods of fostering a commerce culture in rural areas. Finally, the third room showcased the achievements in procurement and production.

The theme was continued by smaller pavilions, Village Store (building 514) and Kolkhoz Teashop (building 532). The former introduced the Exhibition guests to the full range of good available to the workers at kolkhoz and sovkhoz farms and machine and tractor stations. The latter offered a typical menu of a village teashop. The two pavilions replicated their prototypes exterior-wise as well. Both of them were based on standardised architectural blueprints.

In 1959, the Tsentrosoyuz Pavilion was converted into a new exhibit: The Peaceful Uses of Nuclear Energy. And after 1963, Pavilion No. 61 began chronicling the latest achievements of the Soviet consumer goods industry.