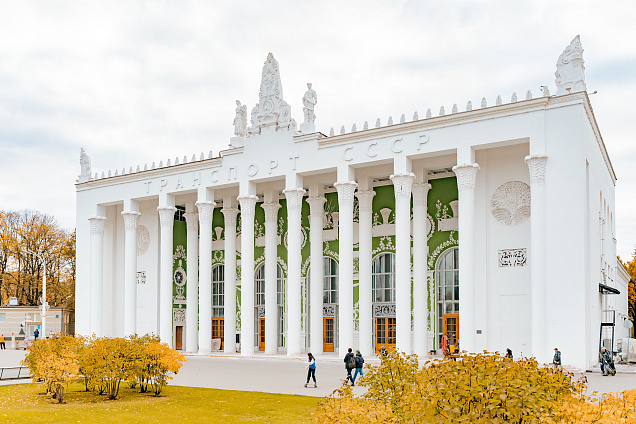 At tuesday, 11:00
Route On map
Description
History
About place

The pavilion is slated to reopen as the Moscow Transport Museum once the restoration work is complete.

The pavilion was built in 1937, and rebuilt in 1954 to the design of Pyotr Revyakin, Alexander Gromov, Vladislav Tukanov and I.A. Ignatyeva.

The pavilion's portico is a federal cultural heritage landmark.

The pavilion housed the exhibits of the State Polytechnic Museum from 24 April 2014 to 1 March 2020. The exhibits were split into seven themed sections: Beyond the Earth, Illusions, Radio+, Nature's Replicas, New Anthropogenesis, Energy of the Core and Energy of Plasma.

The construction of a wooden pavilion designed by Mikhail Schneider began in the summer of 1936. According to the VSKhV master plan, the building was to house the Grain exposition. The design was partially reworked later by the Exhibition's architectural studio headed by Vyacheslav Oltarzhevsky, with contributions from Mikhail Minkus and Andrei Yershov. The new design was implemented in 1937. A year later, the contents of the pavilion also changed: the Cotton exposition moved in, which had formerly occupied the building that stood on the site of the current St. Basil the Great Chapel.

The Cotton Pavilion had an art deco façade. The twin columns of the portico lent a calm, measured rhythm to its architectural appearance.

In 1940, the entrance was decorated with moulded images, ornaments and paintings, covering the entire wall surface inside the portico. This was perfectly sufficient for the pavilion to cope magnificently with its role of paying tribute to the Soviet cotton growing industry, which made sure the Soviet Union never had to import any of its 'white gold'.

But the postwar restacking of VSKhV primed the building for a new exposition: Land Farming. The change of specialism called for a new look, especially in the wake of a substantial redesign of Mekhanizatsii Square and enlargement of many other buildings on the Exhibition grounds.

The commission to redesign Pavilion No. 26 was given to Pyotr Revyakin, A.I. Ignatyeva, Alexander Gromov and Vladislav Tukanov. They gave the building a classic monumental loggia portico at the entrance, which clashed with the massive façade of the now-defunct Animal Husbandry Pavilion. The added space was roomy enough to accommodate a lobby, a lecture hall and a few utility rooms without significantly affecting the prewar part of the building.

In October 1938, the Grain exposition in Pavilion No. 26 was replaced with a new set of exhibits dedicated to the advances of Soviet cotton farming industry. The exposition included a demonstration site with a specimen irrigation system that showcased a range of technological innovations, including an instrument that measured water consumption and automatically transmitted its readings over distance.

The Land Farming exposition, which took over the pavilion in the mid-1950s, introduced visitors to several exhibit clusters: Soviet Soils and Methods of Improving Soil Fertility, Production and Use of Fertilisers and Chemicals for Fighting Crop Pests, Diseases and Weeds, Best Practice in Land Farming, Seeds and Planting, New Land Reclamation and Front-Running Kolkhoz and Sovkhoz Farms and Vehicle and Tractor Depots. The exposition gave onto several crop growing pavilions lined up on either side of Michurin Garden.

Pavilion No. 26 changed its theme once again in 1956 when VSKhV was augmented with the expositions of the All-Union Industrial Exhibition. The pavilion was more or less centred on chemical industry for the next 10 years, covering such areas as high-molecular polymer compounds, organic pesticides and fertilisers.

When a new building was appointed for the Chemical Industry exposition (Pavilion No. 20) in 1967, Pavilion No. 26 was once again re-skilled, this time to showcase Soviet achievements in transport. Transport-related exhibits were deployed on five outdoor sites, as well as inside the pavilion. Numerous artfully executed vehicle models representing rail, marine, inland waterway, motor and air transport were on show in scale model form and life-size (the Yak-42 aeroplane model is still there). The instruments and mechanisms used for the propulsion and operation of different vehicles and craft were also on display. The exposition made extensive use of dioramas, photographs, stained-glass panels, dynamic and electrified maps, which all combined to make it one of the most exciting exhibitions at VDNH.