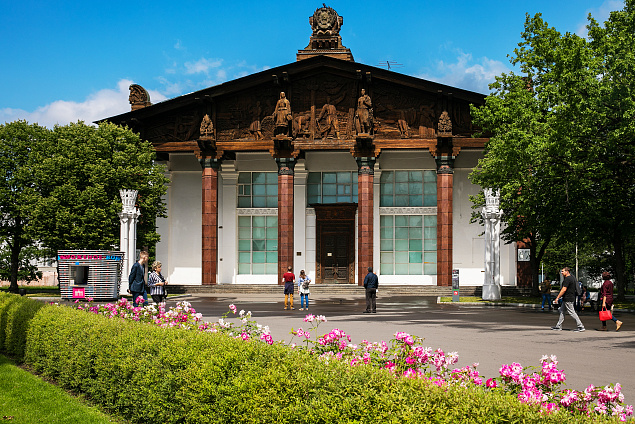 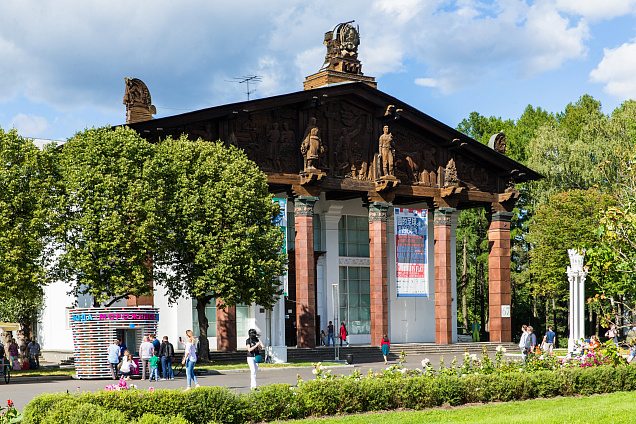 The pavilion was built in 1954 to the design of Farid Rekhmukov and A. Reznichenko.

The first exposition to move into the pavilion was that of the Karelian Finnish SSR, which had existed for years before 1954. Before the war, the exhibits pertaining to the Karelian Autonomous SSR were part of a greater thematic cluster, Leningrad and Northwest RSFSR, housed in Pavilion No. 64.

The Karelian Autonomous SSR was reconstituted as Karelian Finnish SSR on 31 March 1940. Now that Karelia was a fully-fledged Union republic it deserved its own building. The exposition was moved into the former Soviet Arctic Pavilion, tucked away amid verdant greenery quite far from Kolkhozov Square. It was a rather low, single-storey pavilion with a prominent central part where the most conspicuous elements of decor were the lofty entrance portal and an aeroplane model.

Originally built in 1937 under the supervision of Mikhail Seleznyov, the building was later remodelled to the design of Boris Vilensky and Gleb I. Glushchenko. The remodelling gave the pavilion a new façade doubling as a pedestal for the aeroplane model. The monumental visage of the building was enhanced by the ribbed glazing, imitating ice rafts. There was a huge map of the Arctic above the entrance, stretching the entire height of the building front. Marked on the map was the legendary North Pole drifting polar expedition led by Ivan Papanin. The plants around the pavilion—lichens, moss, shrubbery, dwarf trees of the tundra and so on—represented austere sub-Arctic nature. When the Karelian Finnish SSR exposition moved in, the plane was replaced with the republic's emblem flanked by flags while the map was concealed behind a massive red bunting inscribed with a quotation from the law that transformed the Karelian Autonomous SSR into the Karelian Finnish SSR, in Russian and Finnish.

The pavilion was destroyed by a fire soon after VSKhV was shut down in 1941. When the exhibition reopened in 1954, there was a summer café on the site. The new Karelian Finnish SSR Pavilion was built on a new site, next door to the Siberia Pavilion.

The new Karelian Finnish SSR Pavilion for the postwar VSKhV was designed by Farid I. Rekhmukov with contributions from A. Y. Reznichenko. The building came out ascetic looking, reminiscent of peasant homes in the Russian Far North. Its main façade is a six-column portico with a gable. The columns are faced with red Finnish granite and decorated with copper plating. The columns prop up a massive carved gable with five monumental reliefs on its tympanum, sculpted by Lev A. Kardashev, dedicated to the leading industries of Karelia: land farming (planting and harvesting), forestry, animal farming and fisheries. The sculpted reliefs are rendered more eloquent by the texture and warm chocolate-like tone of the wood, lending the pavilion a particular northern feel. The gable is capped by a carved shield set between a laurel leaf and an open book. This was the mount for a gold-plated bronze emblem of the Karelian Finnish SSR before 1957 (by Boris Orlov). Crowning the pavilion now is an RSFSR emblem, transferred here from the now-defunct pavilion of Russia's central industrialised regions.

The carved door of the pavilion's main entrance was hand-crafted by Nikolai Chizhov. The interlaced fir branches, bird and squirrel images, a frail hand with a fir cone and ornamental decor on the portal complete the Karelian references on the Karelian Finnish SSR Pavilion.

The pavilion combined outer asceticism with inner beauty both on the outside and the inside. Such exhibits as carved oak panels, embroidered towels and Karelian landscapes painted by Vasily V. Meshkov, presented a fascinating image of Karelia, its nature and folk culture. Rune Singer, the sculpture by Sergei Konenkov, was the uncontested centrepiece of the pavilion's decor. The sculpture, which is currently in the State Museum of Fine Arts in Karelia, stood in the pavilion's central hall.

The Academy of Sciences of the USSR

The Karelian Finnish SSR was once again redesignated as Karelian Autonomous SSR on 16 July 1956, and made an administrative part of the Leningrad Region. Accordingly, all Karelian exhibits, including the Rune Singer sculpture, were relocated to the building dedicated to Leningrad and the northwest of the RSFSR. The former Karelia pavilion was now ready to receive its next occupant: the Academy of Sciences of the USSR exposition moved in in 1957. When the Exhibition opened for its next season, the exposition's name was shortened to just 'Science'.

The Science Pavilion presented the landmark achievements in science and technology, including cosmonautics, which occupied the first hall. This exposition was the first to introduce the general public to the world's first spacecraft, launched by the Soviet Union on 4 October 1957.

Culture and Customs of the Peoples of the RSFSR

In 1959, the pavilion's subject was changed to Culture and Customs of the Peoples of the RSFSR. The section devoted to painting and folk arts and crafts was a great success with visitors. The exhibits included paintings, prints and sculptures by the finest artists in the Russian Federation as well as the works of artisans' cooperatives and artworks from the Art Fund of the RSFSR.

Mounted on a separate podium by the pavilion's entrance were monumental sculptures by Vera I. Mukhina, Elena A. Yanson-Manizer and other great sculptors of the time.

In 1964, a new name was emblazoned on the pavilion—Pulp & Paper and Timber-Chemical Industry. In 1967, its specialisation was changed again, this time to Soviet Print. The Soviet Print exposition traced the history of the Soviet printing industry back to the earliest days of Soviet rule. On display were specimen products of all central and local publishers from across the Union.

Apart from books and periodicals, the exhibition featured printing equipment of every description, typecasting machines and the latest technological achievements of the industry.

In 1977, the pavilion hosted the exhibition of the Lithuanian SSR as part of VDNH's massive celebrations of the 60th anniversary of the October 1917 Revolution.