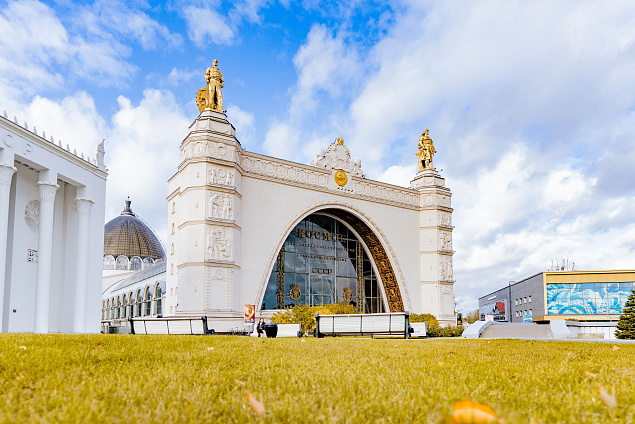 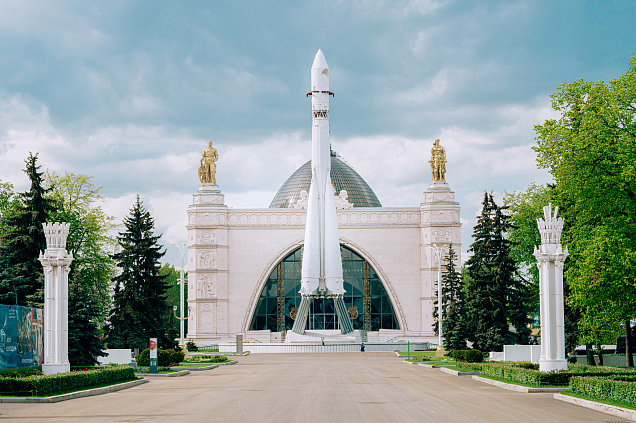 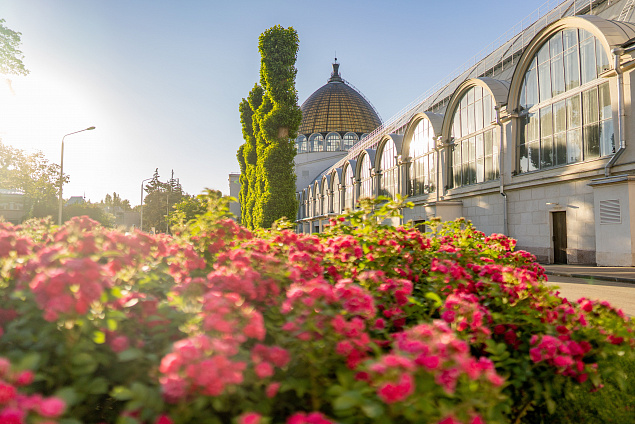 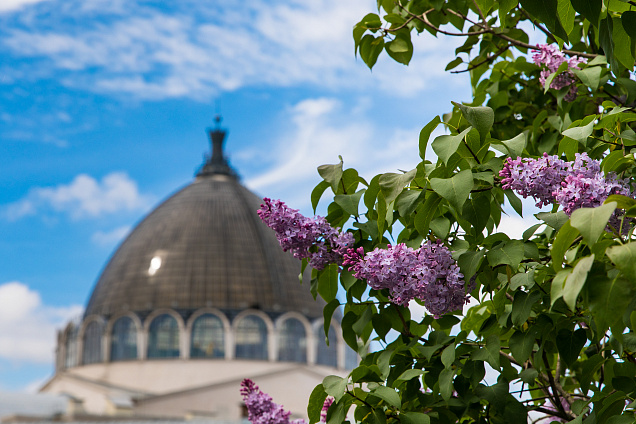 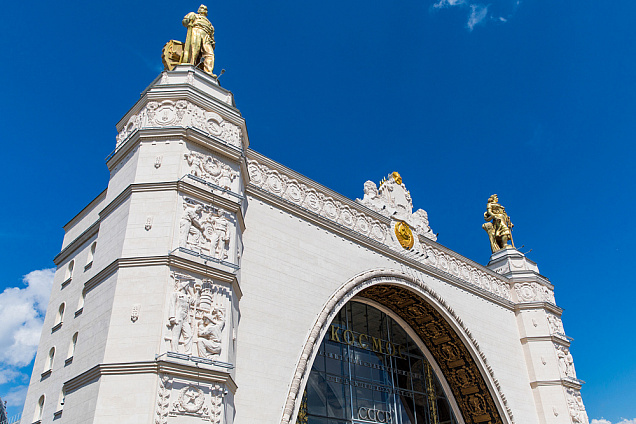 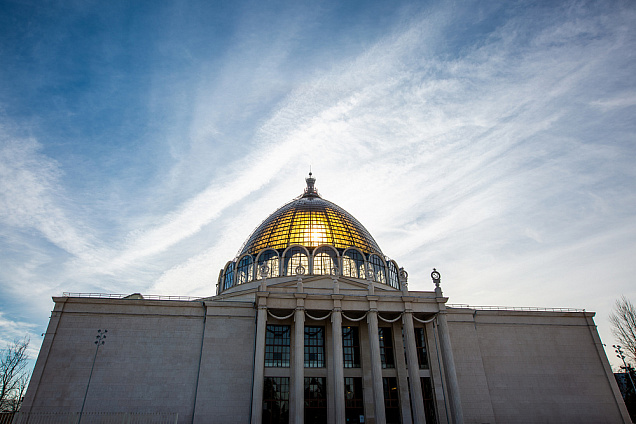 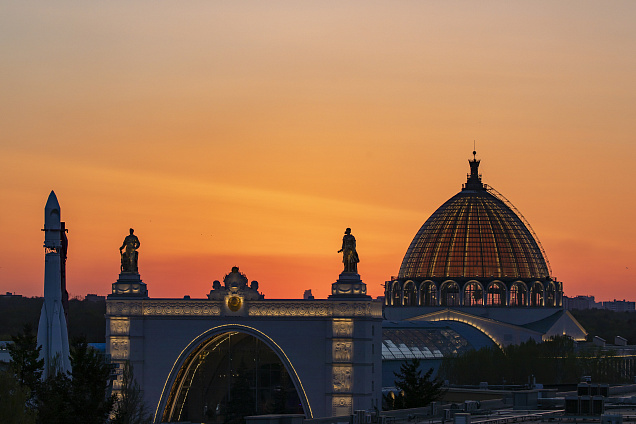 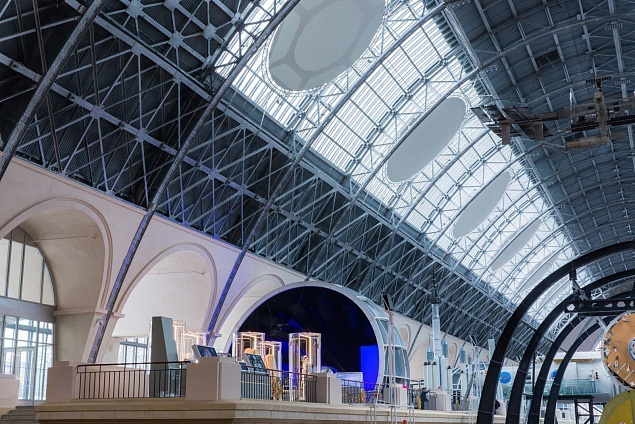 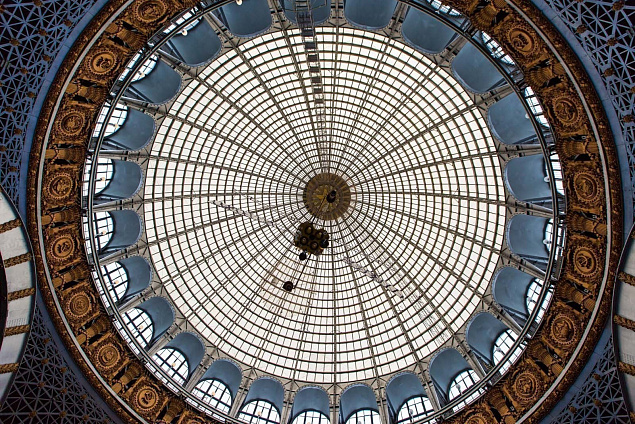 The Cosmonautics and Aviation Centre. Pavilion No. 34 Space

Close in 58 min
Route On map
Description
History
About place

The Cosmonautics and Aviation Centre is open to the public. Tickets are available at ticket offices and on the website cosmos.vdnh.ru. One can enter the pavilion once every two hours. The first session starts at 11:00 AM and last at 8:30 PM.

At the Cosmonautics and Aviation Centre, you can see more than 120 unique aircraft and space vehicles, showpieces of the defence industry and more than 2,000 rare archive documents, photos and videos dedicated to the history of space exploration.

It was reconstructed in 1954 based on the design of the architects V. S. Andreev and I. G. Taranov.

In 1954–1956: Mechanisation and Electrification of USSR Agricultural Industry.

The reconstructed pavilion Cosmos (No. 34) houses the world-class museum complex, Cosmonautics and Aviation Centre. Its huge exhibition area is dedicated to the history of Russian space exploration. It was a crucial part of the Exhibition's renaissance.

According to the first master plan of the All-Union Agricultural Exhibition, the Mechanisation pavilion, topped with a decorative tower, was supposed to stand in the centre of the octagonal Square of Reconstruction of Agriculture, connected to the Square of the Nations of the USSR by an alley. The man who designed this building and the entire plan was V. K. Oltarzhevsky.

The Exhibition complex created in 1937 to celebrate the 20th anniversary of the October Revolution was based on the principle of step-by-step presentation of individual ensembles. Each viewing point revealed to the visitors new angles of the squares and separate sites of the Exhibition. The main advantage of this planning solution was that it allowed guests to explore the exhibition complex very quickly and without walking too much. For this purpose, a system of connected squares surrounded by pavilions and alleys and periphery zones coming away from them was created. Features of a dominating height in various shapes were interspersed with low flat pavilions that had vividly decorated entrances. Combined, they created an image that was united and easy to take in. Within this concept, the snow-white Mechanisation pavilion should have become the largest after the Central pavilion.

Alas, this expressive object of architecture proved to be virtually useless. It could not perform its task of demonstrating the hundreds of tractors, combine harvesters, vehicles and aircraft used in agriculture. The construction of six Republican pavilions nearby only aggravated the situation. It did not help at all to free the space around the Mechanisation pavilion from the flood of visitors. In June 1938, V. K. Oltarzhevsky was exiled to Vorkuta which finally buried the entire idea of the 'wooden skyscraper'.

For the opening day of the All-Union Agricultural Exhibition on 1 August 1939, the ensemble of the Exhibition transformed thanks to the effort of the chief architect of Moscow, V. V. Chernyshov. The number of features with a dominating height has decreased considerably compared to the initial plan, while the Mechanisation pavilion was extended as a giant hangar along the Main Alley toward the Ponds of the Exhibition, according to the design created by I. G. Taranov, V. S. Andreev. and N. A. Bykova.

The main façade of the building was made of steel, glass and concrete, and looked out onto the Square of Mechanisation. One could see the agricultural machines standing along the alley in two tiers from any point of the Exhibition. It looked like the machinery was moving on a conveyor belt, which, according to the authors' idea, created 'an imposing image of the agricultural power of the USSR'.

By 1954, the pavilion extended its exposition and was now called the Mechanisation and Electrification of Agriculture of the USSR. That was when the hangar of the old pavilion was extended with a two-floor domed hall. The dome with a metal framework was 60 m high (and the total height of the pavilion was 75 m).

The entrance arch was made from plate glass which gave the pavilion a unique charm, especially when it was lit up at night. There were faceted towers on both sides of the main façade topped with sculptures of the mechanic worker and the kolkhoz woman, who was a combine driver. The front facets of the towers were covered with bas-reliefs depicting the mechanisation and electrification of agriculture, while the central part of the monumental frieze that visually connected the two towers was connected to the antefix. The antefix was decorated with the coat-of-arms of the USSR and portraits of the great originators of Soviet power: Vladimir Lenin and Joseph Stalin.

Initially, the pavilion covered such areas as the Tractor and Motor Industry, Agricultural Machinery, Mechanisation Technology for Grain and Herb Farming, Development Methods for New Land and Drying-Out of Wetlands, Mechanisation in Agriculture and Cattle-Breeding, Aviation and Its Use in Agriculture, Electrification of Agriculture and many others. The logical continuation of this multi-profile exposition was the Typical Machine and Tractor Station lot situated in the central part of the New Soviet Village section.

In 1956, machinery became the main topic of the pavilion's contents. In its 26 halls and outdoor areas, the guests of the Exhibition could see press-forging, foundry and large-size metal-cutting equipment; equipment used in non-ferrous and ferrous metallurgy; control and measuring devices and automatic machines; the milling, grinding, gear-working, turning, drilling, lathe, jig-boring machines and benches used in the watch industry, as well as automatic lines made up of modernised machines. There were electrical measurement and thermo-technical control tools, gas analysers and control devices; equipment for the optical and cinema industry. The section on standardisation and metrology was particularly popular.

In 1961, the pavilion housed the temporary exposition Urban Planning, and for the International Exhibition of Machines and Agricultural Equipment at VDNH USSR (1966), it exhibited Soviet industry.

Gradually, most of the sections of the massive exposition of Machine Engineering became so big it needed more buildings. These sections turned into individual expositions located in the halls of the pavilions of former Republics during the preparations for the 1964 season.

Later, as a part of the creation of a global exhibition at VDNH USSR to celebrate the 50th anniversary of the Revolution, the accomplishments of space explorers were stationed in the famous hangar pavilion. Visitors could go from the history of rocket technology to models of artificial satellites and learn about the equipment and life-support system for astronauts. A Cosmodrome based on the project by L. I. Marinovsky was built in front of the pavilion, in the middle of the round pool left from the never-realised Spike fountain (V. I. Dolganov, K. I. Pavlova). These and many other interesting showpieces, exhibited as wall panels and interactive models, fascinated all visitors to the Exhibition.

This way, from 1967 to 1991, two expositions were stationed inside the pavilion at the same time and on the territory surrounding it: Cosmos and Machine Engineering. Ever since then, this building has been marked with two numbers, 32 and 34.

In 2014–2015, Cosmos hosted the famous exposition The Mechanics of a Miracle: the exhibition of objects created especially for the opening ceremony of the 22nd Winter Olympics in Sochi. The exhibition was a big success.