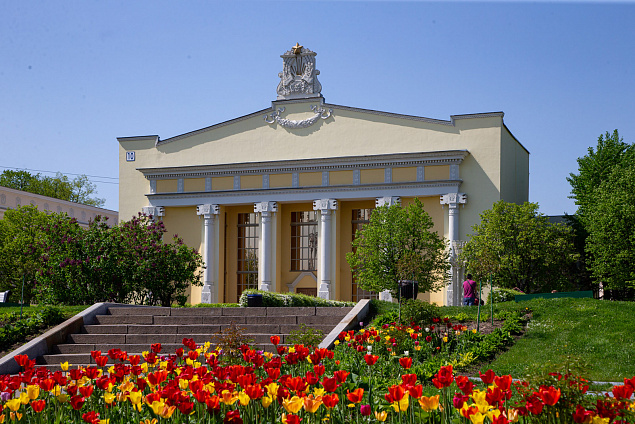 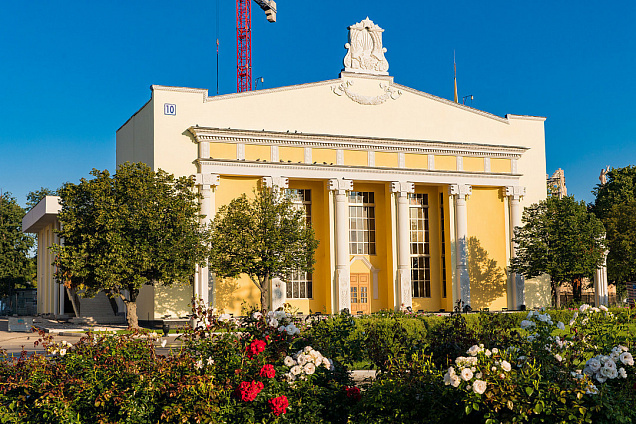 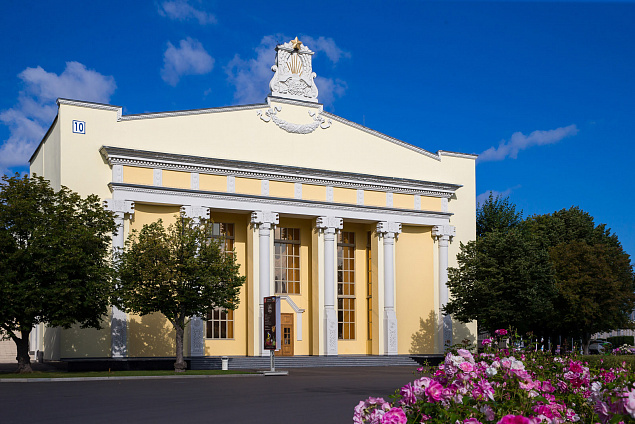 Pavilion No. 10. The exhibition and trade centre of the Republic of Moldova

This pavilion is open to the public.

The pavilion's boutique offers clothing by local designers; its other features include a traditional Moldavian restaurant, an exhibition of Moldavian jewellery that you can also purchase and sales of various healthy lifestyle products.

The main façade of the building faces the Friendship of Peoples Square and is adorned with ten bas-reliefs that symbolise the key sectors of Moldavian agriculture, as well as the coat of arms of the Moldavian Soviet Socialist Republic, which features symbols of the region's traditional produce: grapes, corn, wheat and sunflowers, all bathed in sunlight.

The pavilion's construction was completed in December 1951. The finishing touches were added to the interior design by December the following year. The building's creators included architects F. P. Naumov, A. I. Zakharov and V. P. Tukanov, with contributions from E. V. Vasiliev.

Before 1963: Moldavian SSR. After the VDNH theme switched to representing different industries, the building was renamed to Standards Pavilion.

The exhibition and trade centre of the Republic of Moldova.

The first iteration of this pavilion, facing the Friendship of Peoples Fountain, was built to celebrate the grand opening of the All-Union Agricultural Exhibition in 1954. In the exterior design, the architects combined classical architectural motifs and various elements borrowed from Moldavian tradition. The pavilion's main façade was shaped like a portico with a spacious porch that was adorned with ethnic patterns. The carved pillars bore the weight of the decorative frieze that featured ten bas-reliefs with depictions of Moldova's main agricultural specialisations. The grand pediment was crowned by the republic's coat of arms, while the façade's corners were adorned with cornucopias out of white concrete. The stucco trimmings evoked images of traditional Moldavian lace and embroidery.

The shallow niches at the pavilion entrance provided a background for two symmetrically arranged monuments, in honour of G. I. Kotovsky and S. G. Lazo. The statues were cast in concrete and painted to look like bronze.

The central rotunda covered an area of 285 sq. m. Its dome was encircled with a bronze-plated stucco wreath and rested on artificial marble columns. There were intertwining grape vines carved into the column capitals.

The six ceiling panels were adorned with the same repeating motifs: an ornamental vase brimming over with fruits and grapes, as well as wheat sheaves, cotton bushes and tobacco plants, sunflowers and corn.

The rotunda's centrepiece was a sculpture called Harvest, which depicted two kolkhoz farm girls and a young male grain farmer. It was designed by V. M. Akimushkina and P. V. Melnikova. Incidentally, the initial plan was to put a cornucopia vase here; it was to be adorned with reliefs and filled with real fruit.

A 1963 debate on the Decree on Restructuring the Operations of the USSR VDNH, which had been issued by the Central Committee of the Communist Party and the USSR Council of Ministers, resulted in a decision to repurpose Pavilion No. 10 for housing the Standardisation and Metrology exposition, which was to be moved from the two small exhibition spaces in the Mechanical Engineering Pavilion (currently known as the Space Pavilion).

As part of the process, the ethnic motifs and any other references to Moldova (including the coat of arms, the cornucopias and the bas-reliefs) were disassembled, and the statues of G. I. Kotovsky and S. G. Lazo were removed from their niches. Before long, the frieze already bore the pavilion's new name: the USSR Standards.

The building was further reconstructed ahead of the celebrations in honour of the October Revolution's 50th anniversary.

The new main façade—a giant glass screen—was moved six metres away from the original site. The pediment and the columns were removed, while floors and partitions were added between the floors. As a result, the pavilion's total size increased from 930 sq. metres to 2,300 sq. metres. However, despite the major interior overhaul, the porch ceiling retained its ornamental rafters; the antechamber's coffered ceiling and scone lights and the adornments in the rotunda were preserved as well. The paintings on the porch and the dome were painted over with white, likely at that time.

The pavilion's façade changed again in 1997, largely reverting to its original design, although the six-metre shift remained the same as in 1967. The massive, eye-catching triangular pediment with the vividly outlined coat of arms once again became an organic part of the Friendship of Peoples Square's architectural ensemble.

The exposition of the Moldavian SSR Pavilion chronicled the Moldavian people's fight for independence and showcased the Republic's cultural and agricultural achievements. Crop farming, grape growing, gardening and animal husbandry all had special rooms dedicated to them. In turn, the USSR Standards exposition reflected the issues of quality and durability assessment and product design. The pavilion's rooms demonstrated the latest research in metrology and the most innovative measuring equipment models. The numerous booths and displays shed light on the development of a unified design documentation system and government data standardisation.

The Moldavian SSR exposition returned here for a few months in 1977, during the celebrations in honour of the Soviet government's 60th anniversary.