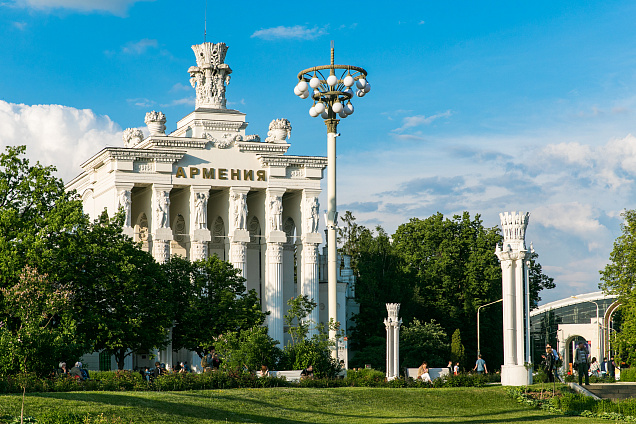 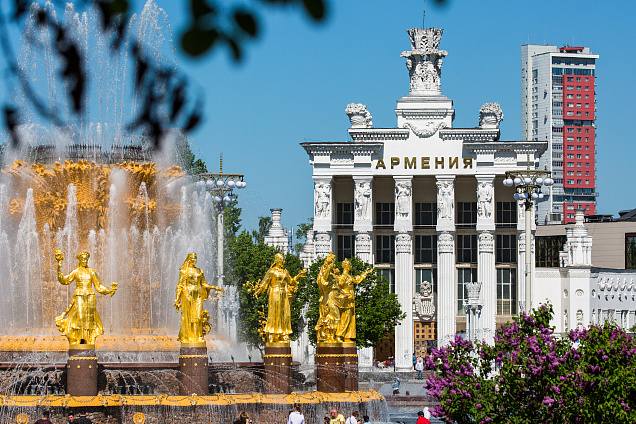 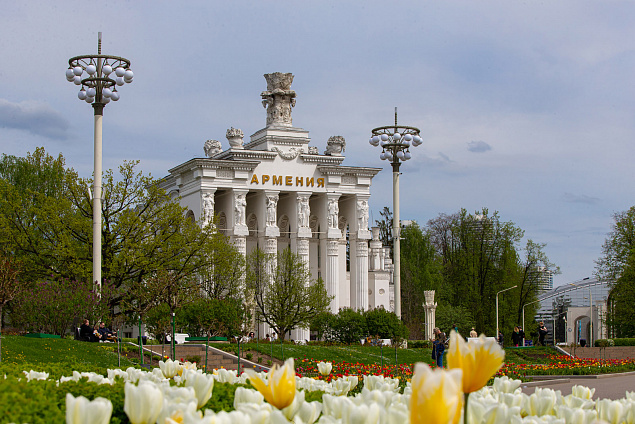 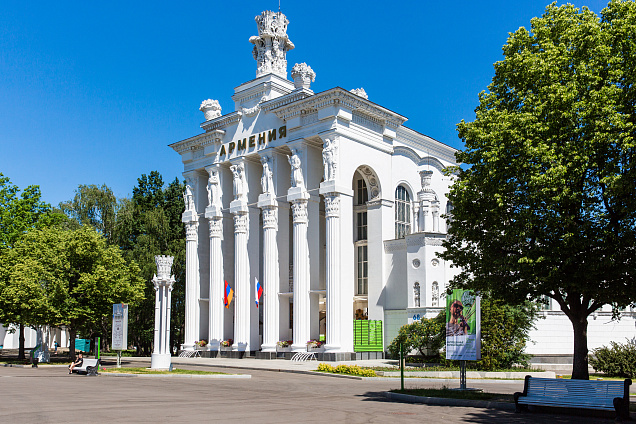 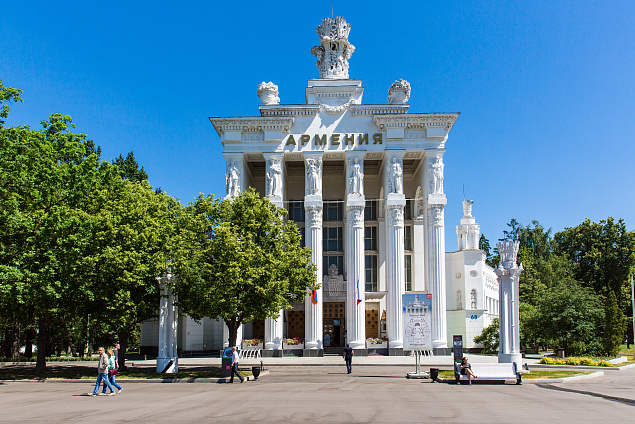 Pavilion No. 68 The exhibition and trade centre of the Republic of Armenia

Today till 20:00
Route On map
Description
History
About place

This pavilion is open to the public.

Since 2003, the pavilion has housed the business and exhibition centre of the Republic of Armenia, which hosts a variety of themed events and national holidays. The Armenian restaurant Ararat is also located in the pavilion.

The pavilion was built in 1954 and designed by architects R. Kliks and V. Taushkanov.

Open to the public.

Located on the People's Friendship square, this hexagonal pavilion with ornamental turrets was built in the early 1950s for an exposition about Siberia. The sides of the pavilion are decorated with elements that allow visitors at VDNH to learn about the flora and fauna of Siberia. This epic representation of the Siberian region is accentuated by the moulded ornamental ledges and bas-reliefs, which display the images of a hunter, a combine operator, a female collective farmer, a shepherd, an agronomist and a miner.

There is a tall six-pillar portico at the entrance, crowned with a large sheaf and cornucopia. Initially, this expressive portico was supposed to be a monumental gateway that would open into a large courtyard and gradually transform into the central hall. However, plans were changed during construction and the courtyard was instead enclosed to increase available exhibition space.

To this day, one of the main features of the entrance hall is the painting Siberia by K. Schekotov, K. Belov, E. Solovyov, N. Klikushin and A. Dubrovsky. Located above the doorway, it is framed with a wreath of wheat and spruce branches, on which squirrels, deer, owls and other forest birds are perched. The figures of black grouse can also be seen around the tops of the columns that flank the entryway. The central hall of the pavilion was constructed as a dome-covered courtyard.

The pavilion's rich and diverse exposition area, featuring panels, paintings, photographic documents, diagrams and tables, maquettes, models and natural exhibits, introduced visitors to the achievements of Siberian agriculture. The entrance hall was dedicated to the exploration of new lands, while the central hall focused on mechanisation and electrification. The booths lining the semi-circular gallery that borders the central hall displayed exhibitions about Altai and Krasnoyarsk Krai, Omsk, Novosibirsk, Kemerovo, Tomsk, Tyumen and Irkutsk, as well as the Tuva autonomous district.

When the national agricultural exhibition transformed into VDNH on 27 March 1959, the Siberia exposition was replaced by a section called the Sputniks, which was soon replaced again by the Agriculture of the Russian Soviet Federal Socialist Republic exposition.

As VDNH increasingly began to emphasize industrial exhibitions, in 1964, Pavilion No 68 was transformed into an exposition on the fuel industry.

In 1967, the Mining Industry exhibition was officially opened, introducing visitors to the history and methods of coal mining, as well as the achievements and prospects of the industry.

Then, to mark the 60th anniversary of the October Revolution, an exposition on the Estonian Soviet Socialist Republic was created for the pavilion in 1977.