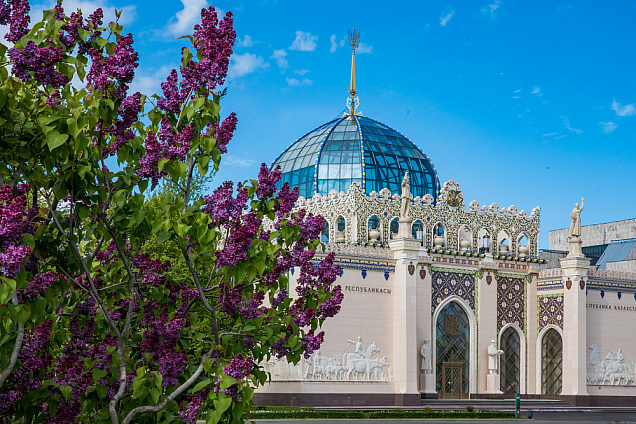 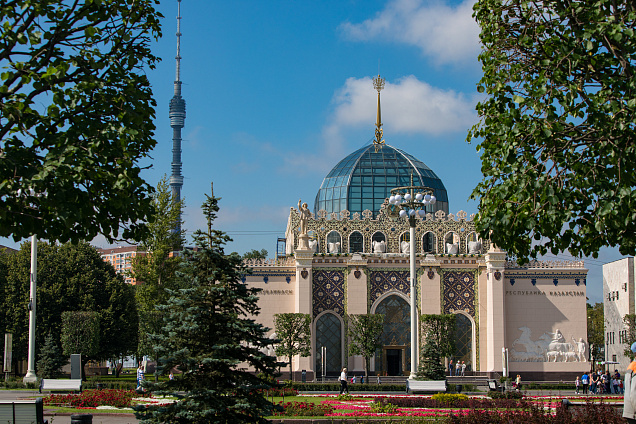 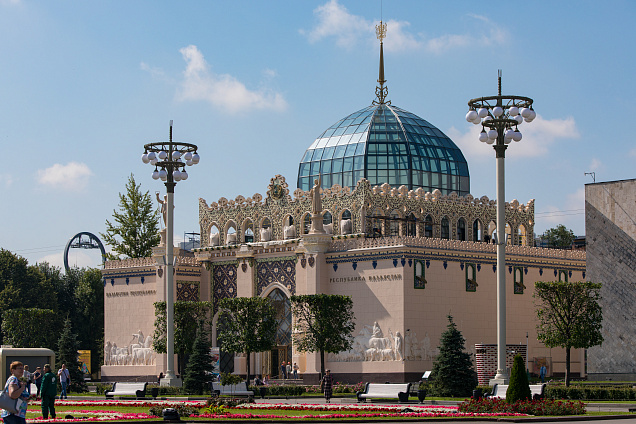 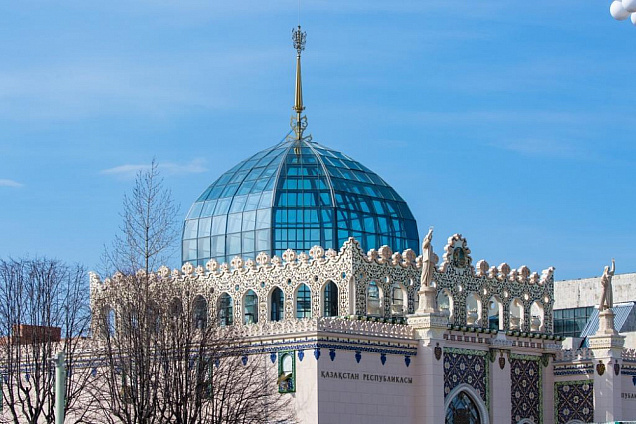 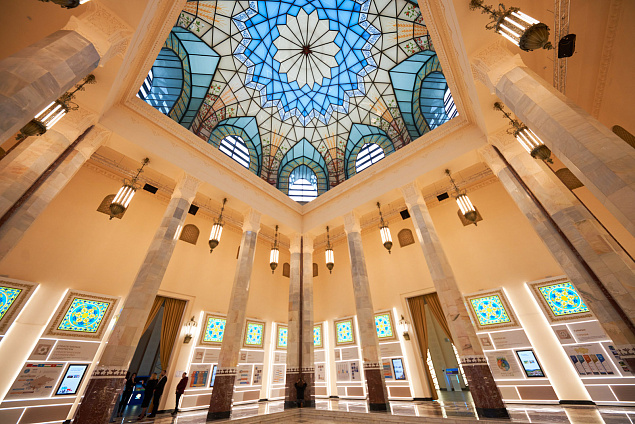 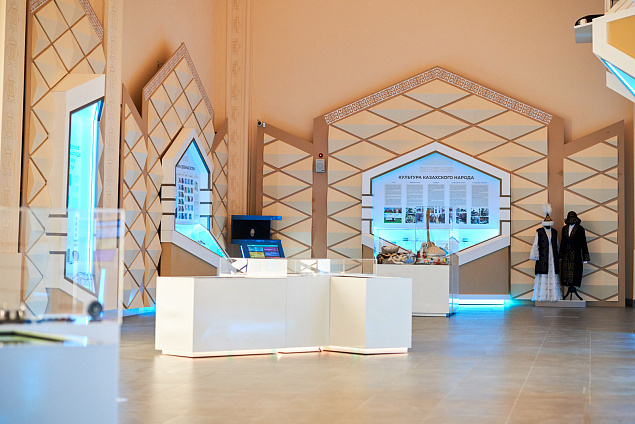 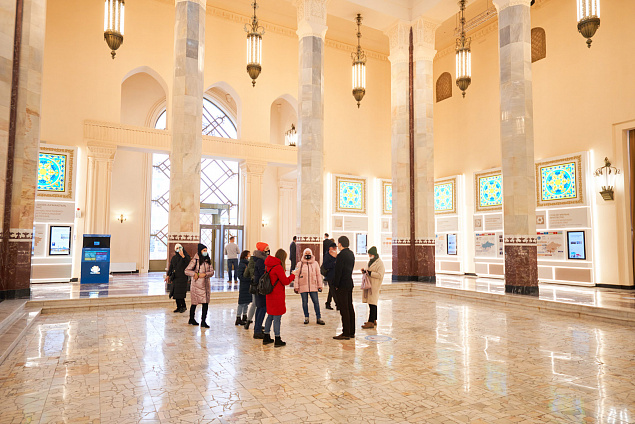 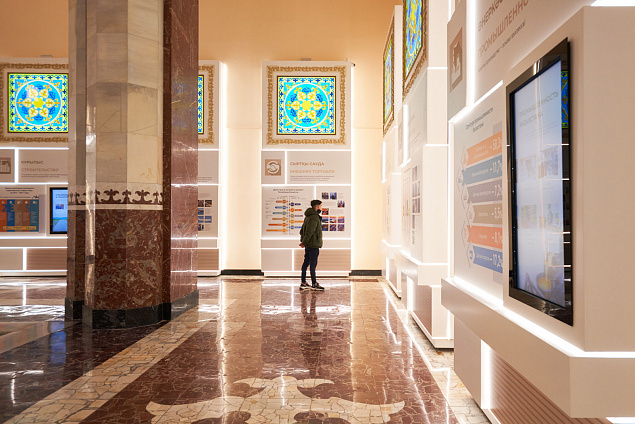 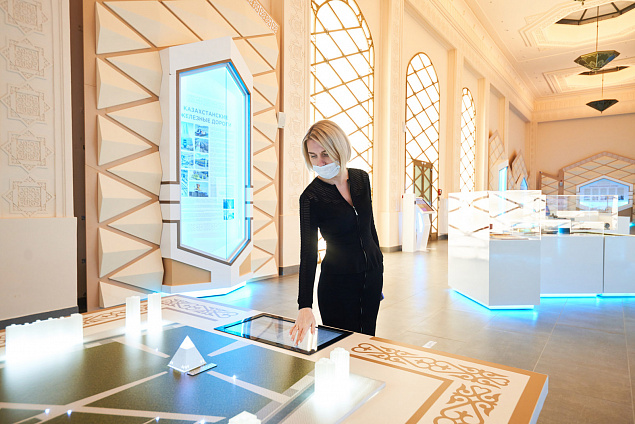 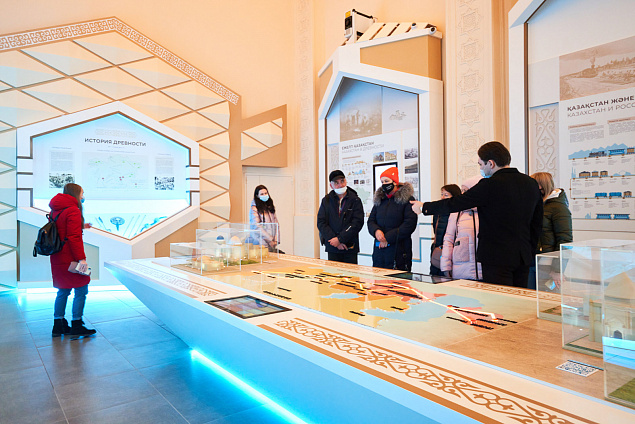 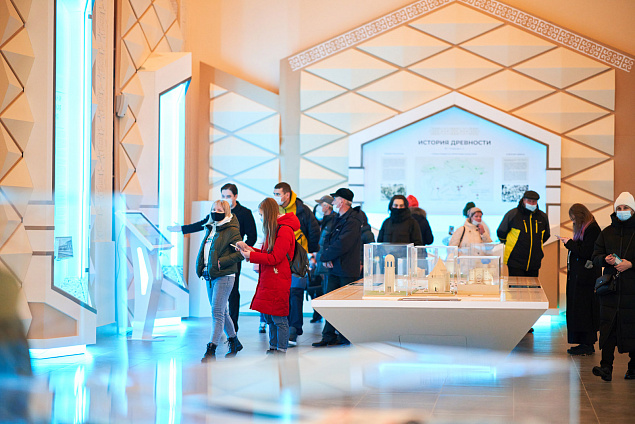 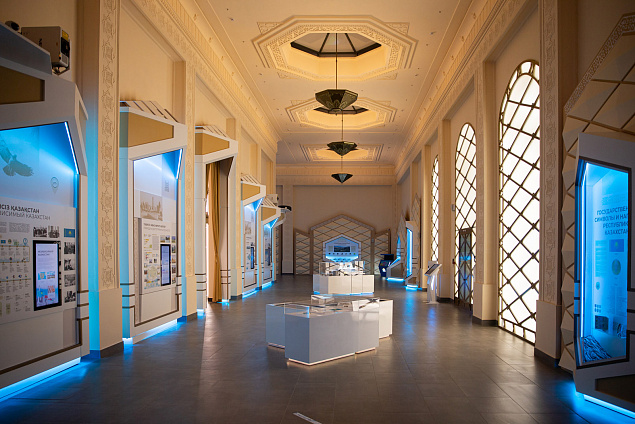 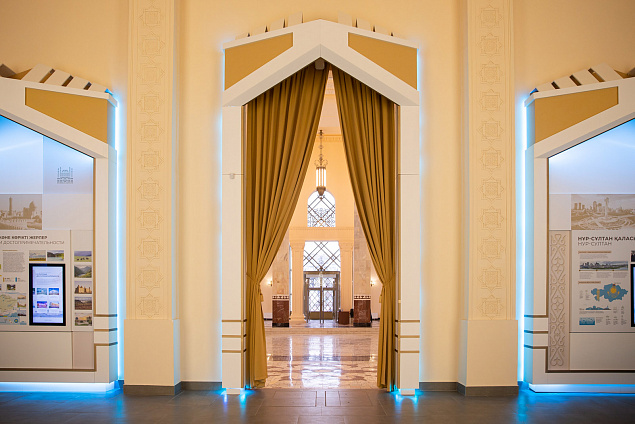 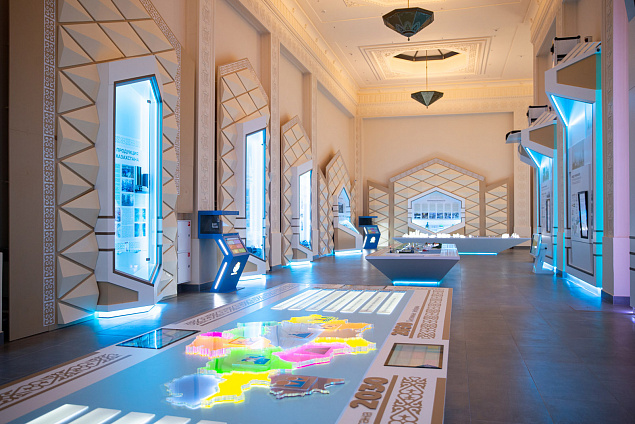 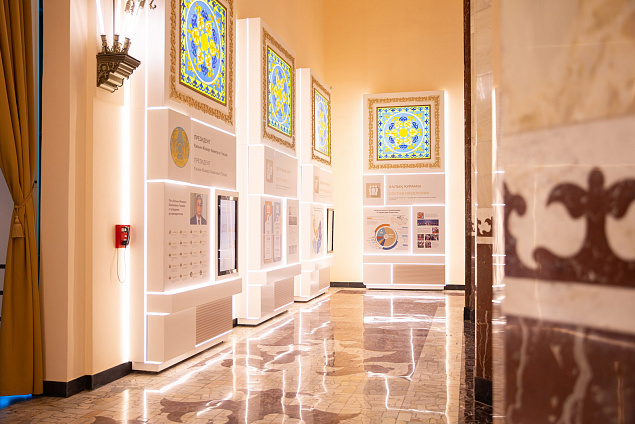 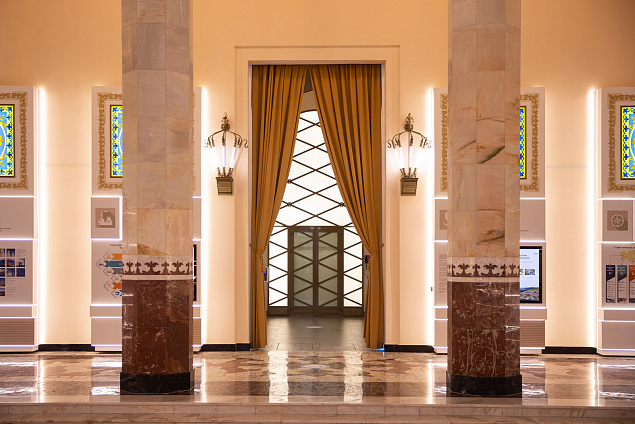 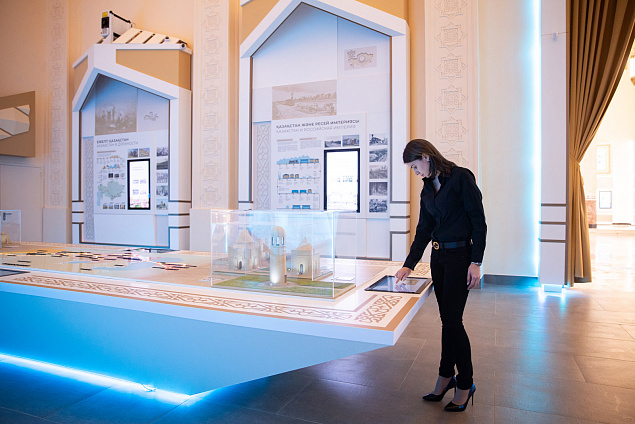 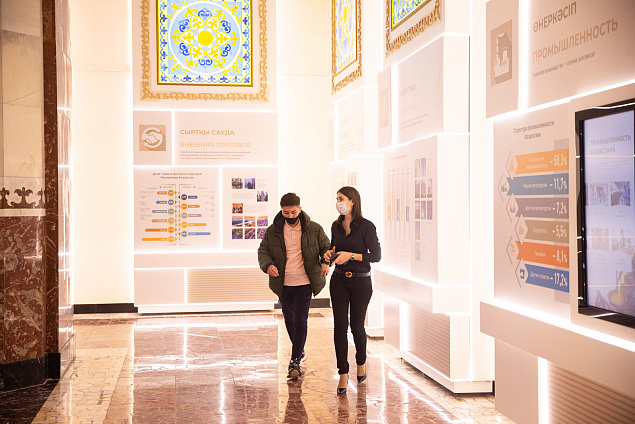 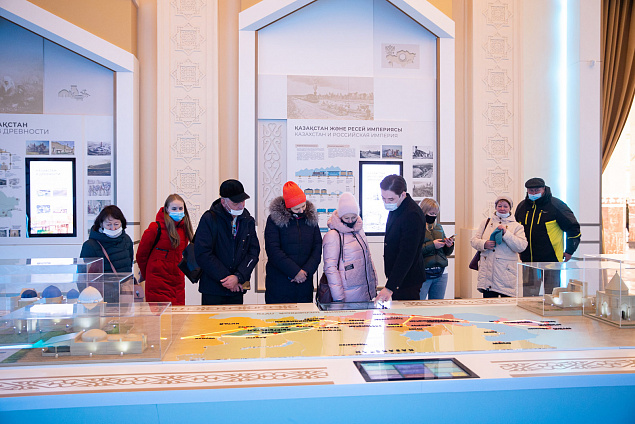 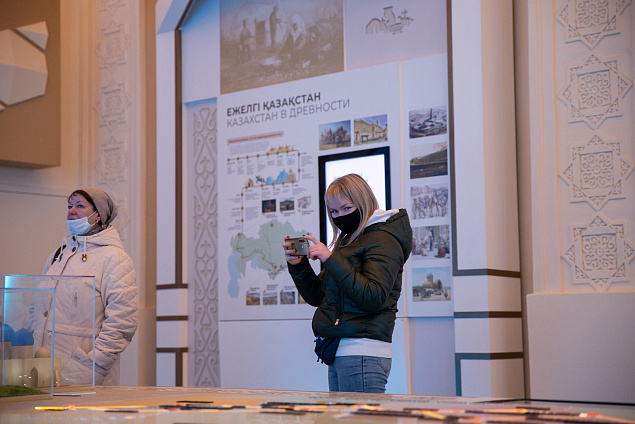 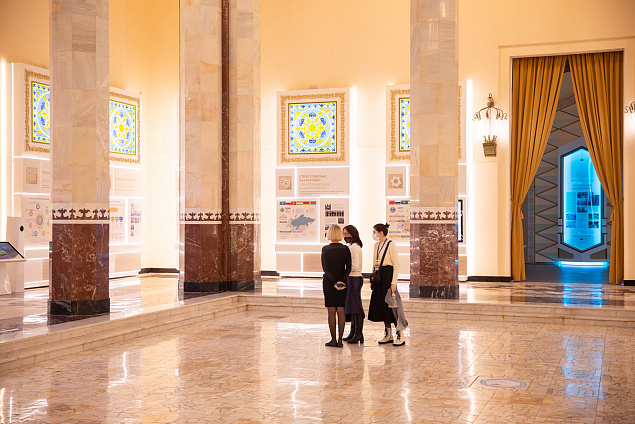 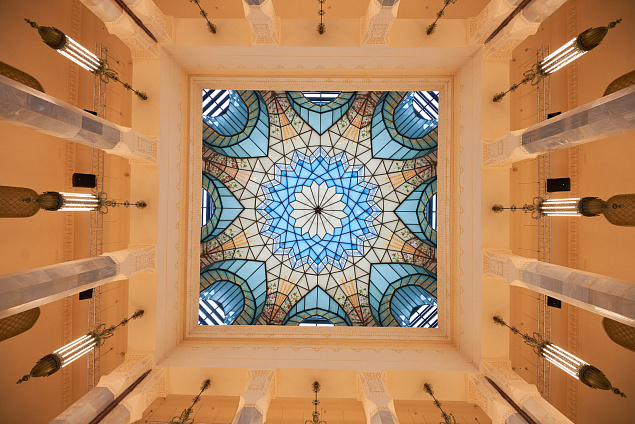 Pavilion No. 11. The exhibition and trade centre of the Republic of Kazakhstan

Architecturally, Pavilion No. 11 of the Republic of Kazakhstan (Metal Production, formerly Kazakh SSR) is designed in the traditions of national Kazakh architecture. The main facade is shaped like a three-span arch and adorned with base reliefs of ethnic patterns as well as sculptures of a steel maker and a female collective farmer as well as monuments to poet Jambyl Jabayev and the high-performance agricultural worker Chiganak Bersiev.

The pavilion was built in 1954, and designed by architects I.M. Petrov, N.V. Kupriyanov with the participation of T.K. Basenov.

The first building of the pavilion was intended to introduce visitors to the exhibition to the achievements of the national agriculture of the Kazakh Soviet Socialist Republic, it was built in 1937 and designed by architect F. Kostenko. The building was hexagonal space with a gallery going all around it and a decorative turret on top.

In 1939 the pavilion was redesigned by architect I. Bezrukov. The decorative turret got replaced by a conical dome. The white and blue facades were adorned with ornaments and the entrance was highlighted with a deep portal in the traditions of ancient Kazakh architecture.

In another year the pavilion was renovated based on a design developed by I. Petrov and I. Khalin: the building got a new monumental facade, whose avant-corps now featured expressive bas-reliefs by sculptor H. Askar-Sarydzha depicting Kazakh agriculture. The central section of the facade got a 25-metre stele, topped off with a majolica coat of arms of the Kazakh Soviet Socialist Republic. At its base was a sculpture of the Kazakh folk singer Jambul Jabayev. The large windows included in the portals were hidden by an ornamental mesh reminiscent of patterned national carpets.

The building was designed as a temporary structure and was made of wood. Therefore, when the national agricultural exhibition reopened after the war, it was decided that a new pavilion was to be built for the Kazakh Soviet Socialist Republic. Unfortunately, it was impossible to preserve the 1940 facade.

The design developed in 1949 by Akademproyekt workshop experts I. Petrov and I. Kuprianov with the participation of Kazakh architect T. Basenov also liberally referenced Kazakhstan's national architectural styles. The building was completed in 1954. The new pavilion looked somewhat like a mausoleum and its imposing shape was a major visual draw at the start of the main alley of the exhibition.

The facade was shaped like a three-span arch. Visitors were greeted here by sculptures of folk singer Jambul Jabayev and the hero of socialist labour Shyganak Bersiev. The recessed entrance in the facade was highlighted by pillars topped with sculptures of a steelworker and a female collective farm farmer. The main and side facades recreated the base reliefs of the previous pavilion made by H. Askar-Sarydzh. The exterior finish sported a very well balanced combination of majolica and bronze. Propped up by the crown of the arcade, a transparent dome with a spire towered over all of this.

The entrance hall, which looked like a small courtyard, had columns all around its perimeter. The decorative lamps, panels and tapestries used in its design were made by Kazakh craftspeople.

In 1961, the side halls of the pavilion were redesigned as two-level structures and a lot of the decorative elements that originally created the ethnic feel of the building were lost.

In 1966–1967, the exposition changed, the pavilion was renamed Metal Production and was renovated according to a design developed by architect S. Kobetsky and engineer V. Anisko. The pavilion got taller thanks to an annex that replaced the dome and a new glass and concrete structure replaced the rear facade.

In order to create a new architectural look for the building, the facade was covered with slag-glass slabs with vertical stainless steel rods. Even though it was a successful solution in many ways, it disrupted the stylistic continuity between the square of Friendship of Peoples and the Square of Industry.

The exposition of the Kazakh SSR Pavilion was focused on the economy, culture, cattle breeding and crop growing in the republic.

In early 1964, Pavilion No. 11 was repurposed as a metal production exposition. Its interior changed accordingly. The former decor of the central hall, whose main topic was now ferrous metal production, was completely covered by stainless steel sheeting and a gleaming panel of V. Lenin, a map of the USSR showing the main metal production centres of the country, the periodic table and large screens with photographs of samples of industrial products.

The exposition went into great detail about the various aspects of ferrous and non-ferrous metal production. Liberal use was made of boards, diagrams and models to show visitors the process of iron ore extraction, various aspects of industrial metal production, the best practices of the most advanced facilities and samples of new products. The open site behind the pavilion was used to demonstrate drilling systems, loading machines and other large pieces of equipment.

In 1977, as part of an exposition organised at VDNH to mark the 60th anniversary of the Soviet government, Pavilion No. 11 put on an exhibition devoted to the Kazakh Soviet Socialist Republic for several months.

The political and economic problems that dogged the emergence of the Commonwealth of Independent States in the 1990s resulted in the Metal Production Pavilion being used as real estate for shops, offices, private museum expositions and cafes for a period of 20 years.

During the restoration work at VDNH, restorers discovered bas-reliefs from 1954 depicting farming in Kazakhstan on the facade of the cultural property of federal significance, Pavilion No. 11 Kazakhstan. The author of the bas-reliefs is the sculptor Kh.N. Askar-Sarydzha. 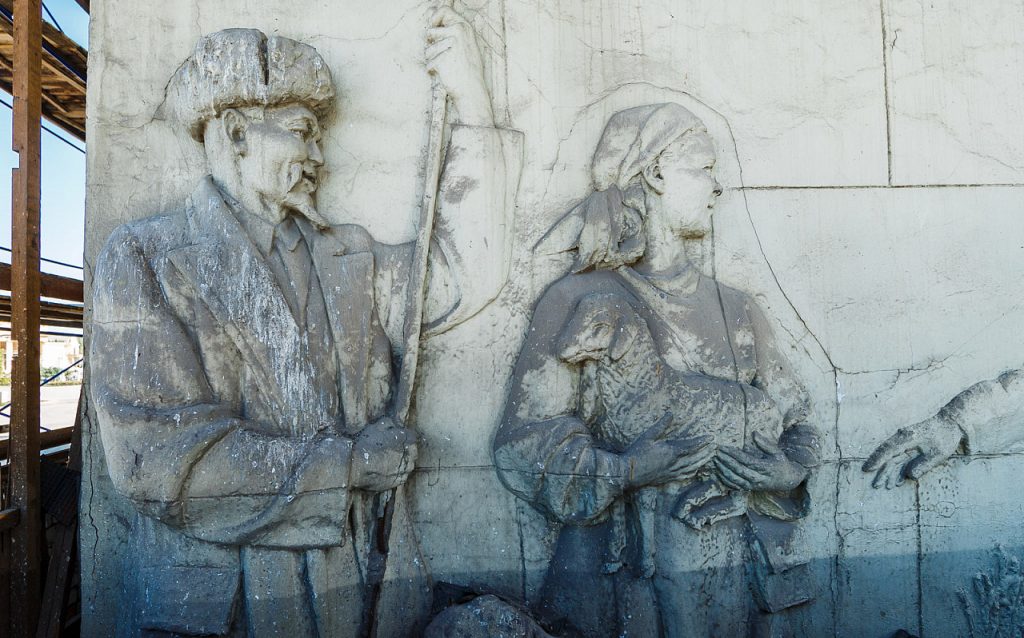