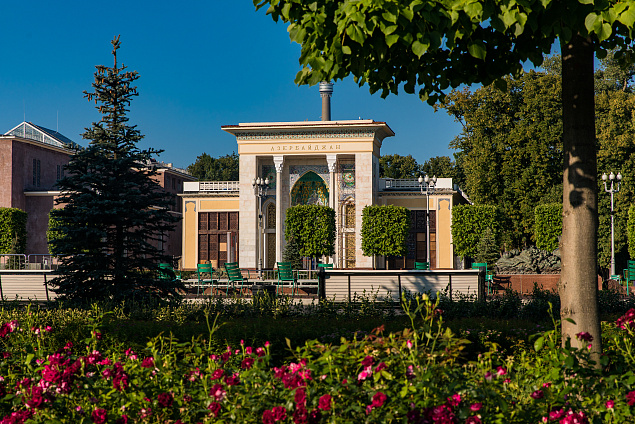 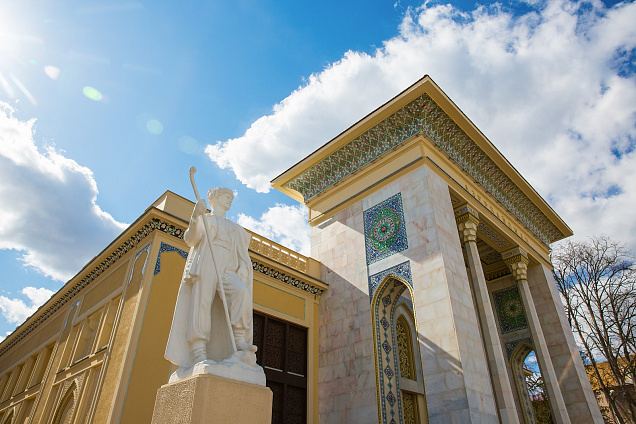 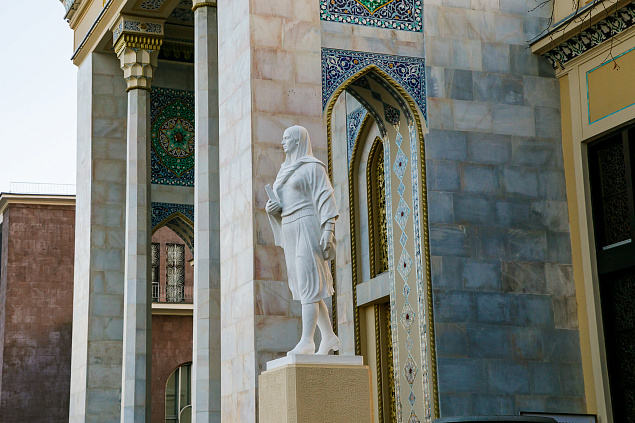 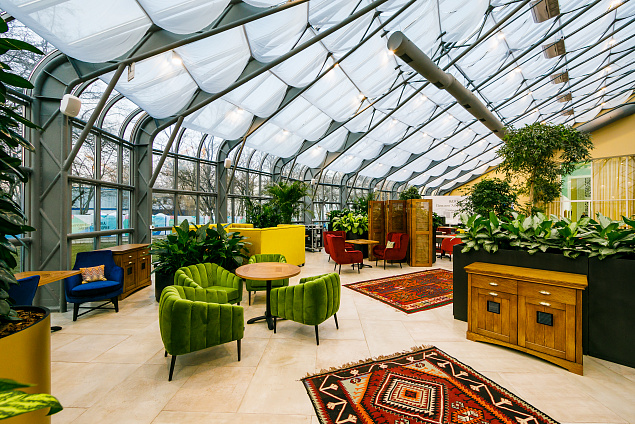 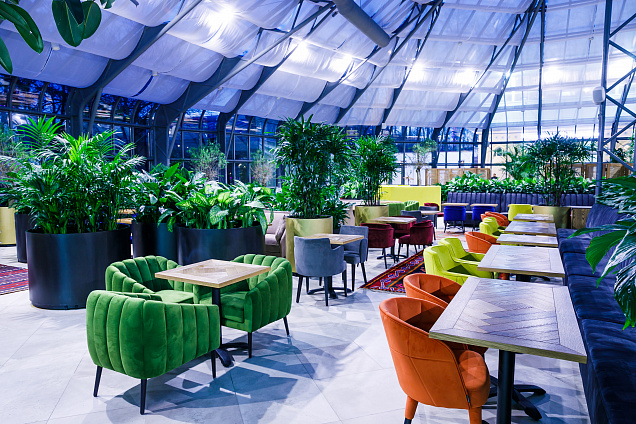 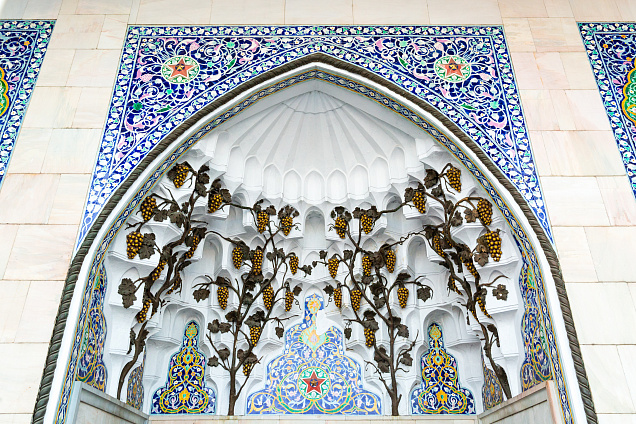 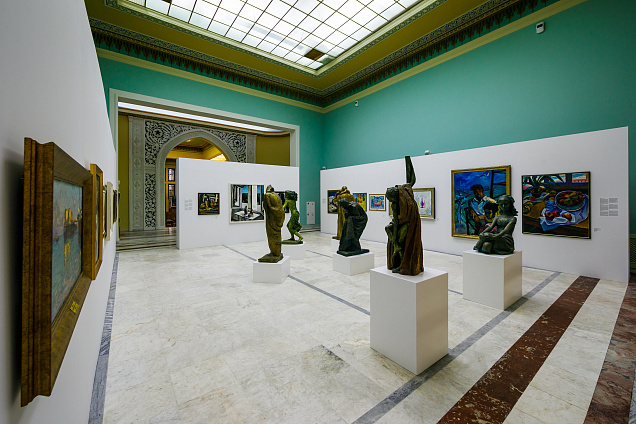 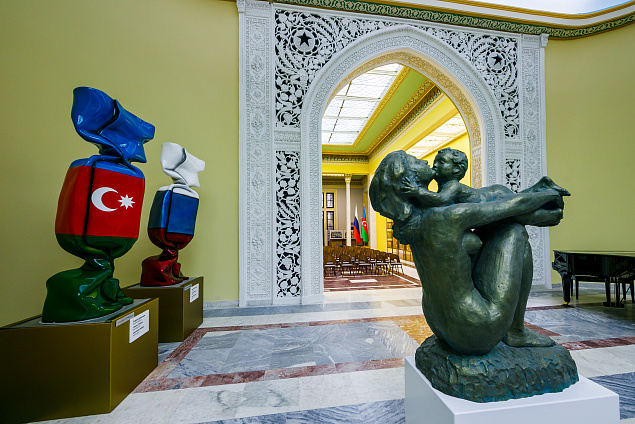 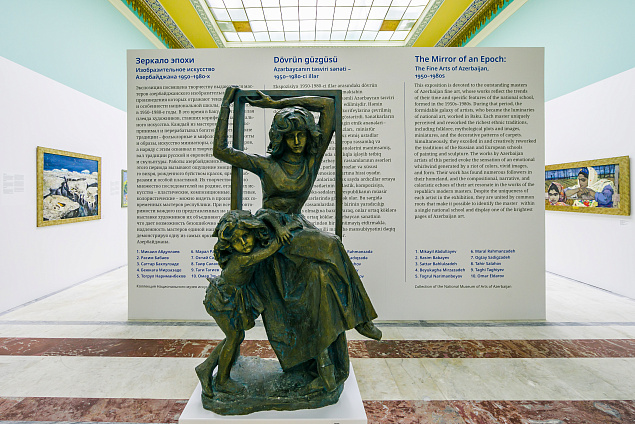 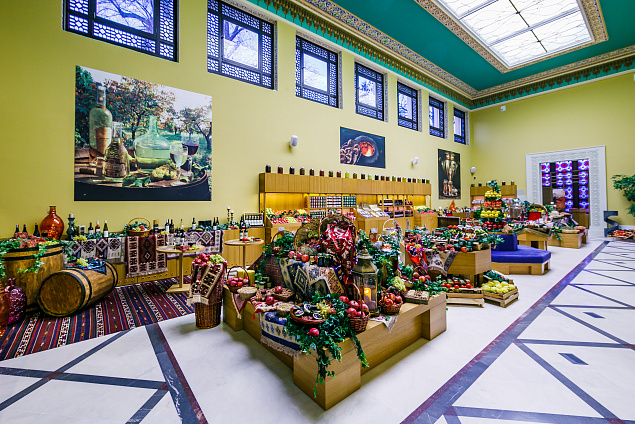 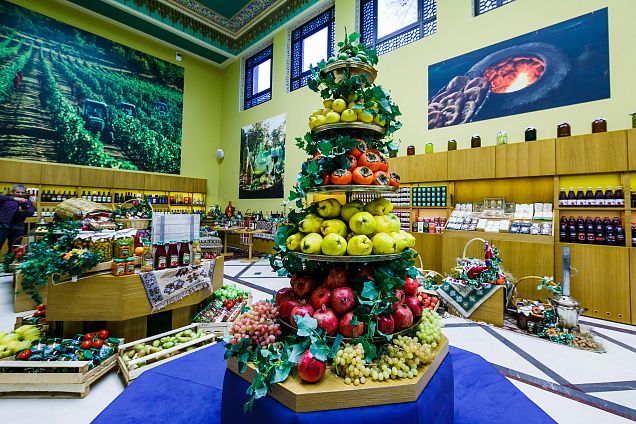 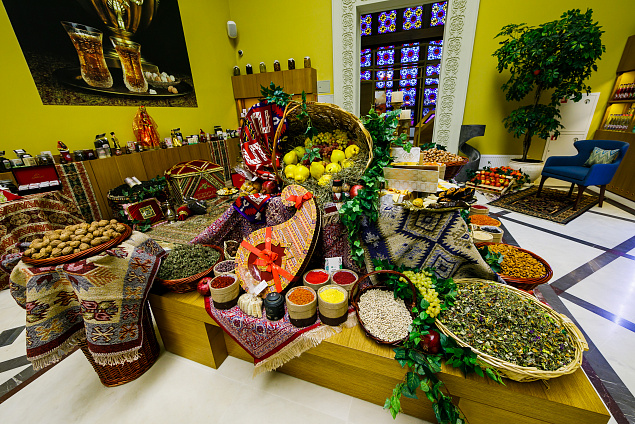 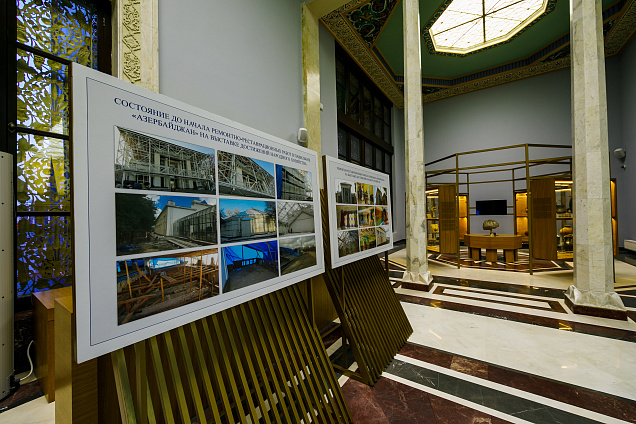 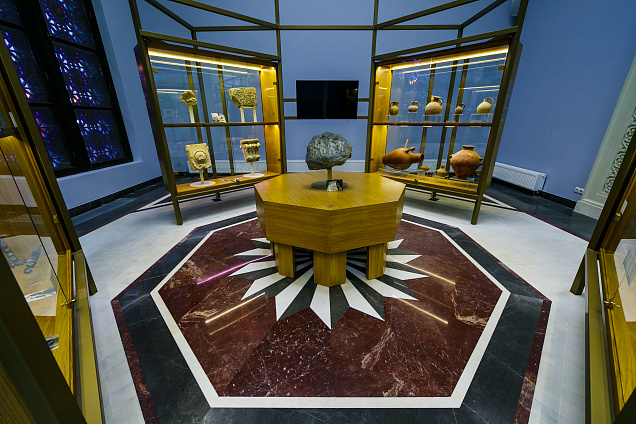 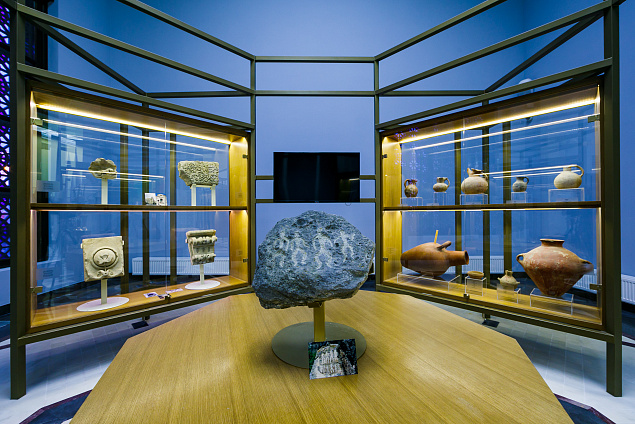 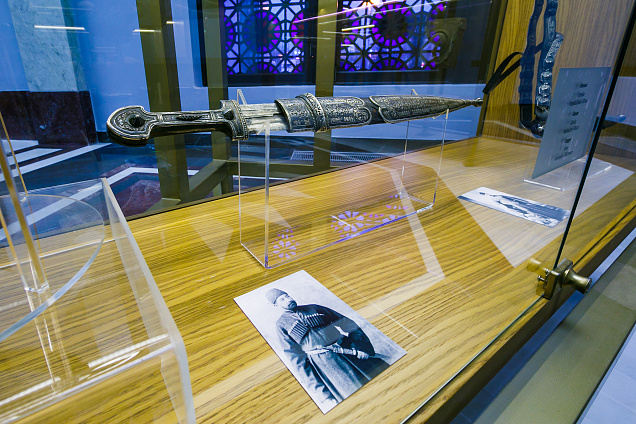 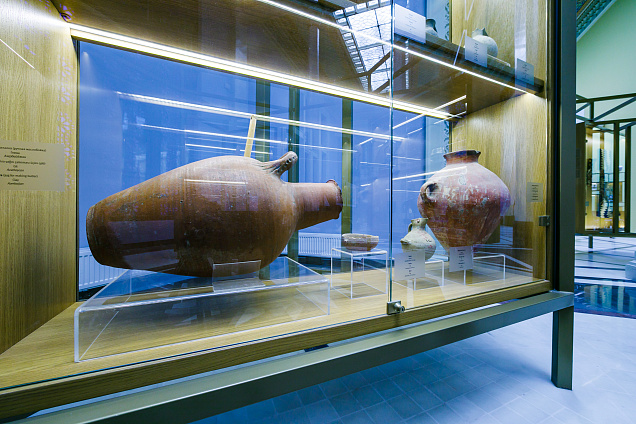 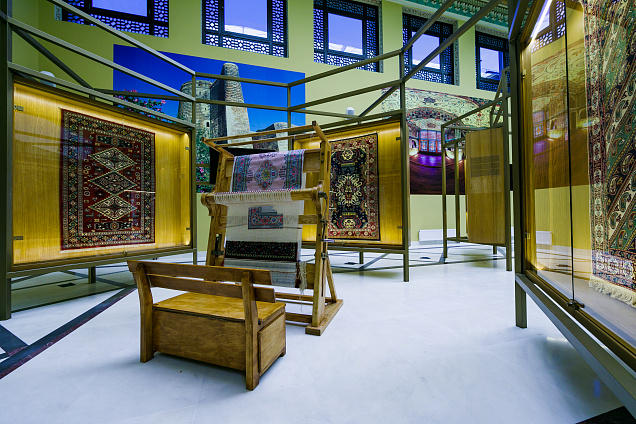 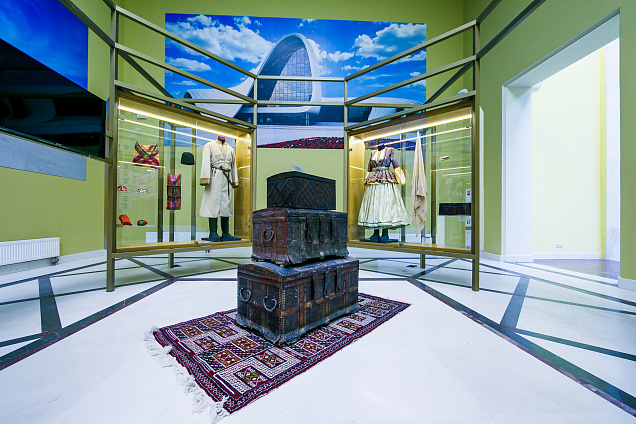 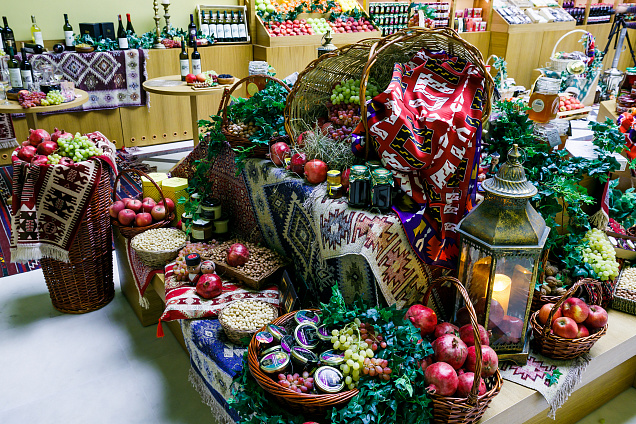 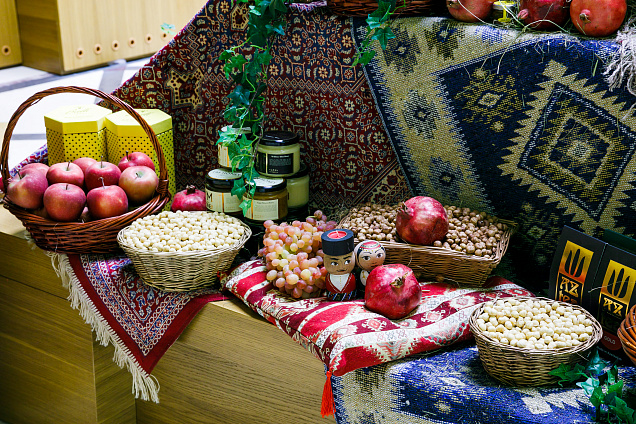 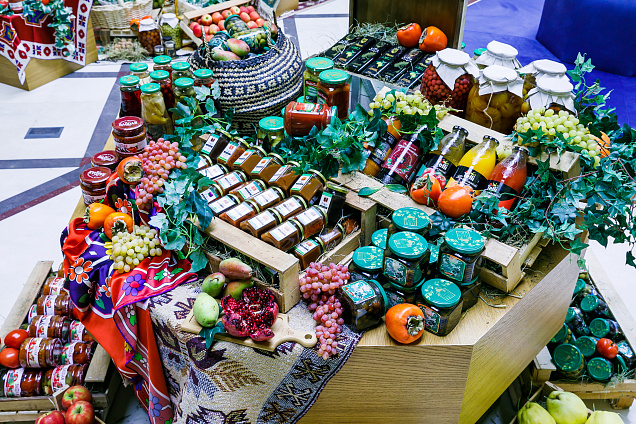 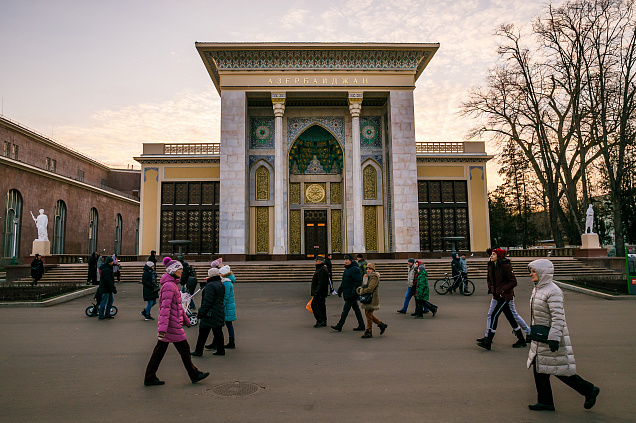 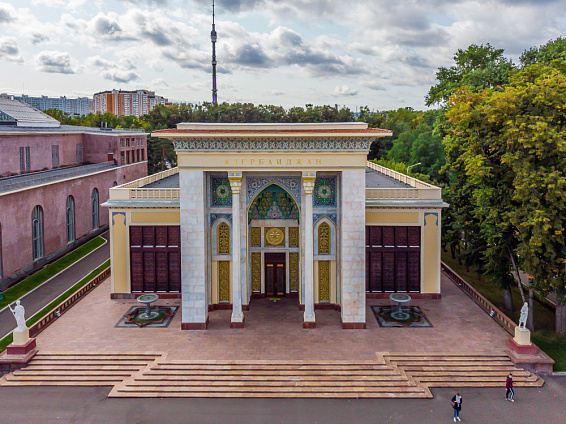 Pavilion No. 14 Exhibition and Trade Centre of the Republic of Azerbaijan

The pavilion is open to the public.

The pavilion was built in 1939. The official opening ceremony of the Azerbaijan Pavilion after restoration was held on 23 November 2019. The pavilion houses the trade and exhibition centre of Azerbaijan. The centre operates as a cultural and business mission of Azerbaijan in Russia, promoting cooperation between the two countries.

The conservation artists did an impressive job restoring the decorative details on the historic façade. Among the features restored were the stalactite vault adorned with grapevines inside the main entrance portal, the granite main staircase, the basement, the plaster coat on the walls, ceramic decor on the main façade, metal grating on the windows, the cornices, metal structures of the greenhouse and the stylobata.

The entire entrance suite was reconstructed, complete with the front door unit, the cups of the two twin fountains and the historic sculptures Shepherd and Azerbaijani Woman, which were reconstructed from the original sculptor's moulds in the custody of Azerbaijan's National Museum of Arts.

The conservation artists also restored or reconstructed the unique shabaka stained glass windows: the nutwood mesh Azerbaijani craftsmen assemble detail by tiny detail without the use of glue or nails.

The pride and joy of the renovated pavilion are its surviving 1939 vintage interiors. The restoration work exposed the previously walled-up historic skylights, conserved the brickwork of the walls and décor details, the translucent ceiling decorations, the skylights and marble facing on the wall piers and basement. The artists applied a polychromatic coat of paint on the ceiling ornaments representing the Azerbaijani national art of rug-making, and recreated or restored the mosaic decoration of the marble floors.

The renovated pavilion comprises several themed areas devoted to Russian-Azerbaijani cooperation. In addition to the permanent museum exhibit introducing visitors to the history, culture and economic development of Azerbaijan, there is a guest exhibition area, presentation room, library with reading room, trade representative's office and a tea café in the greenhouse.

The earliest building meant to accommodate the Crimea and Northern Caucasus exposition was constructed in 1937 on the site of the future Computing Technology Pavilion only to be replaced by two new pavilions a couple of years later: the Armenian SSR and Azerbaijani SSR ones.

The designers of the Azerbaijani pavilion, Sadykh Dadashev and Mikael Useinov, made no attempt to reproduce any elements or specimens of Azerbaijani national architecture. The historic pavilion was a typical example of Stalinist eclecticism. However, the understated form was amply made up for by the luxurious décor. In 1941, this stunning design solution won Dadashev and Useinov the highest recognition: a 2nd Degree Stalin Prize.

The creators of the rectangular Azerbaijani SSR Pavilion gave it a low stylobata faced with red granite. The main façade was highlighted with an imposing 16-metre portico. The portico was capped by a curved cornice which, similarly to the rest of the pavilion, was inlaid with a colourful maiolica ornament. The semi-dome above the entrance was entwined with gold-plated grapevines. The fountains and decorative trellises made the elegiac ambience complete.

The lateral fronts with their unruffled mesh of windows and niches were enlivened by stucco moulds.

For a while, the building stood adorned with murals by Oksana Pavlenko and Leonid Feinberg. But those did not survive the facelift for VSKhV's grand reopening in 1954.

The architects, who had thought of every little detail of the pavilion's exquisite interior decoration, made special provisions for the lighting. The pleasing stained glass ornaments in the windows of the main façade were set in shabaka frames—nutwood trellises similar to those that Azerbaijani folk artisans assemble from tiny parts without the use of glue or nails. VSKhV Head Architect Anatoly Zhukov writes in his book VSKhV Architecture: 'The halls are flooded with golden light percolating through the shabaka, casting bright splotches upon the ornamental floors, the wall rugs and the exhibits. Painted with a subtle ornament, ever so slightly touched by the gold, the rafters and panels of the floor spans stand out in the half-tones of reflected light'.

The vaulted decorative arrangement of the central hall echoes the ornaments of the main façade.

The pavilion was remodelled in 1959, but fortunately without losing its façade, its precious interiors or even the marble floors from 20 years before. The remodelling architect, I.L. Zuckerman, did not alter the style of the prewar part of the building but simply designed a new and final annexe with the greenhouse.

The later occupant, the Computing Technology exposition, brought much more significant changes in its wake. In 1967, the splendid portico was concealed behind a metallic front designed by the Soviet VDNH architectural studio headed by L.I. Marinovsky. Fortunately, the historic décor pieces, with the exception of the lateral fountains, survived underneath the new frame. This was quite possibly explained by the urgency of the façade remodelling work: it had to be completed during the last business week of April to be ready on 1 May when the new expo season opened.

The Azerbaijani SSR Pavilion added a touch of Great Silk Road adventure to VDNH's prim façade with its tea and coffee, its quinces and grapes, honey melons and rahat lakoum, lemons and oranges. The exposition showcasing Azerbaijan's success stories in crop farming, irrigation, cattle farming, silkworm farming, fisheries, culture and domestic comforts naturally segued into the opulent garden in the back of the pavilion. There were some rare and valuable trees there, as well as nuts and fruits.

There was a large aquarium with fountain in the middle of the garden. Different kinds of Caspian sturgeon inhabited the glass octagon.

The Computing Technology exposition that moved into Pavilion No. 14 in 1963 focused on electronic computing technology, control instruments and office equipment, featuring all the latest ideas and designs Soviet scientists and engineers had to offer in the field.

The Azerbaijani SSR exposition briefly returned to the pavilion for the 60th anniversary of the October 1917 Revolution in 1977.