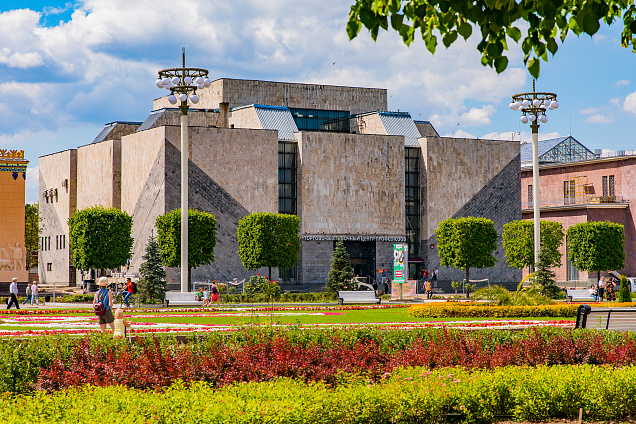 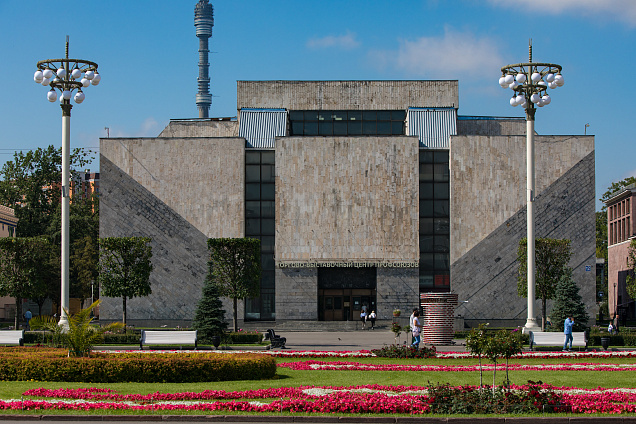 Today till 18:00
Route On map
Description
History
About place

Built in the style of Soviet modernism, this pavilion replaced the Georgian SSR pavilion which no longer exists. The massive building is faced with light and dark marble.

It currently serves as the Exhibition Centre of the Trade Unions.

The pavilion was built in 1987 to the design of Vladimir Kubasov.

The Transcaucasian Pavilion (of the Georgian, Armenian and Azerbaijani Soviet Socialist Republics), designed by M.K. Shashvili, was to be built on the site of the existing Pavilion No. 12 in 1937. It would have been an imposing n-shaped building with two lateral porticos in the Oriental style and a decorative tower on top.

But the project was not meant to be. It was decided to give each republic its own pavilion. The nearly finished Transcaucasian Pavilion, when completed, was to become the Georgian SSR Pavilion. The new design, by Ilya Lezhava and Archil G. Kurdiani, got rid of the tower, but instead had galleries added on either side of the building. The pavilion of sunny Georgia was fronted by an 18-metre portico. There was a small paved patio behind it. The walls that wrapped around the patio were sumptuously decorated with Georgian ornaments. Fountains warbled in the ponds artfully embedded in the ornamental marble floor. The interior decoration techniques used on the floor spans, walls and doorways of the building were modelled on Georgian homes. The impression was made complete by a sculptural composition of Valentin Topuridze and a huge palm tree brought here from Abkhazia.

The building was pulled down in 1965, and a small glass rhomboid pavilion named Subtropical Plants was built instead.

The massive light and dark marble-finished building was erected more than twenty years later. Vladimir Kubasov's pavilion, initially christened Work and Leisure but renamed Soviet Trade Unions at the opening, organically filled the gap that had marred the Exhibition's architectural look since the demolition of the Georgian SSR Pavilion.

In the VSKhV years, the three halls inside the pavilion showcased Georgia's cultural and political improvements and its agricultural success stories. Subtropical plants thrived in the spacious greenhouse: lemons, oranges, grapefruit, tangerines, feijoa and big-leaf bananas. Growing in the ground or in planters outside the pavilion were 500 tea plants, as well as bamboo trees, palms, eucalyptus trees, persimmons, medlars, peaches, quinces, cornelian cherries, pomegranates, pears and apples.

In the early 1960s, the bulk of the exposition was taken over by Georgian industry. Among the exhibits, visitors could find here were metal cutting machines, heavy-duty lorries for alpine farming, tea processing equipment, Rioni and Tbilisi brand mini-tractors.

Further plans were disrupted by the April 1965 fire, which left practically nothing of the thriving Georgian SSR Pavilion. Only the famous greenhouse survived. With a small glass pavilion added to it, the greenhouse became a showcase for the Subtropical Plants exposition, where VDNH visitors learned about the health benefits of citrus fruit.

The Soviet Trade Unions Pavilion built on the site in 1987 fits in well with the surrounding architectural terrain at VDNH. In contrast to its austere and impregnable external look, the inside of the pavilion is flooded with daylight pouring in through the band windows. The sunlit interior was very much in harmony with the message of the exposition, which touted the excellent working conditions and the diverse state-sponsored holiday options available to Soviet workers.