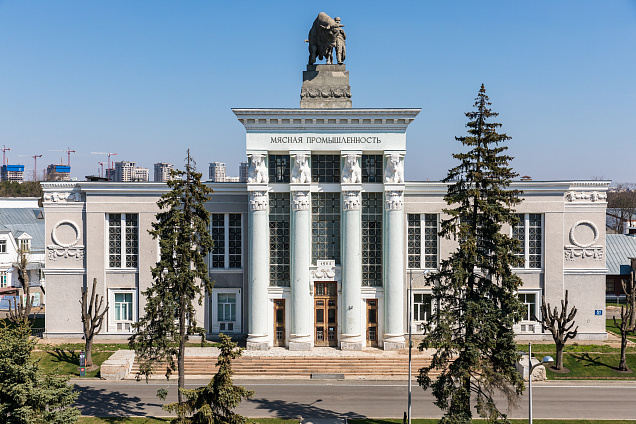 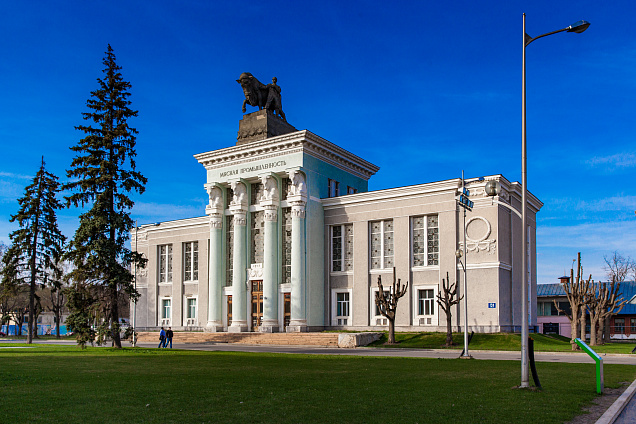 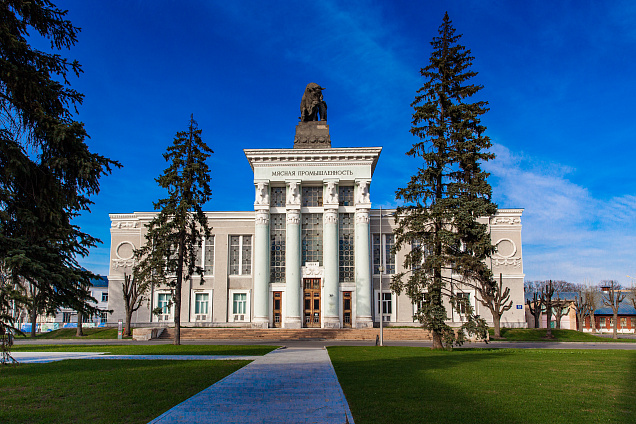 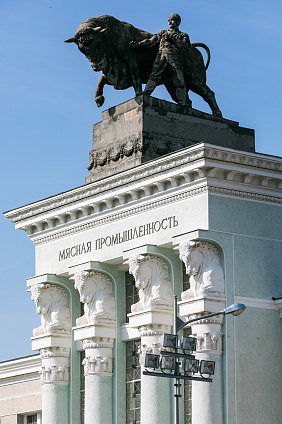 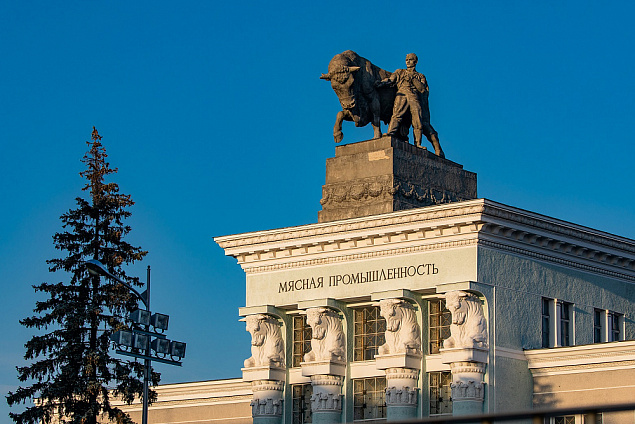 The pavilion is closed for restoration works. It is going to be converted into a museum and exhibition space in the future.

The pavilion was built in 1954. Its architectural design was the work of V. M. Lisitsyn and S. G. Chernobay.

The original 1939 pavilion was called Glavmyaso and was located at the northwestern end of today's Space Pavilion's domed hall. It was one of the closing links in a long row of trade pavilions that used to stretch between the Square of Mechanisation (renamed to Square of Industry in 1959) and the pond zone of the All-Union Agricultural Exhibition. The exposition of the People's Commissariat of Meat and Dairy Industry dominated the rest of the pavilions and was unmatched by sheer scale. The second most impressive exhibit in the category represented Glavkholod and was located on the spot that is now taken up by Pavilion No. 35 (Tobacco).

The Glavmyaso Pavilion, solemn and glimmering with snow-white walls and generous gilding, was designed by F. Ya. Belostotskaya. Its key concept was inspired by the eye-catching information centre at the 1931 Colonial Exhibition in Paris. That was where the architect had borrowed the idea of carving ribbon-like rectangular windows through the dome.

The pavilion's adornments were handled by artist D. P. Shukhvostov and sculptor P. A. Balandin. He was also known for creating numerous other landmarks of the All-Union Agricultural Exhibition, such as the legendary Border Guard and His Dog sculpture; it used to be located near the Far East Pavilion, which has not survived to this day.

The Glavmyaso exposition received a new building during the reconstruction of 1950–1954. Designed by V. M. Lisitsyn and S. G. Chernobay, it had been moved closer to the pond and now faced the Teahouse (currently Astoria restaurant in Building 518).

Note the perfect symmetry of the main façade. The broad granite steps lead towards the main entrance, which is crowned by a towering portico borne by three-quarter columns and adorned with sculpted bull torsos that support a massive entablature, reminiscent of the architectural traditions of Ancient Persia. Glass panels play a significant part in the main façade's design; their front-facing side is decorated with intricate metalwork in the Greek style. The façade's 'blind' corners are accentuated by huge stucco cartouches and lavishly adorned cornices. Against this background, stand the bull sculptures, which used to guard the entrance to the pre-war pavilion.

The building's walls are finished with terrazite plaster; grey with hints of ochre, it contrasts really well with the smooth white surface of minor architectural adornments.

At the top of the portico, rises a tall stucco pedestal that bears the Worker and Bull sculpture. Professor V. P. Tolstoy, PhD in Art History, commented in one of his lectures, 'The sculpture is outlined clearly against the sky, and its massiveness is evident even at a large distance. It is perfectly integrated into the architectural design proportions-wise, but at the same time stands out as an emblem of sorts'. Incidentally, it is entirely possible that the creator of this famous sculpture, N. A. Kongisser, replicated his own design, which was previously featured in the sculpture that used to crown the main building of a meat processing plant in Sochi (lost in 2004). That sculpture is often mistakenly attributed to V. I. Mukhina.

The pavilions ground and first floor are tied together by an antechamber with a tall dome and an ornate marble staircase. Upon entering, visitors are greeted by a monumental sculpted panel by B. V. Scherbakov. It shows a grazing herd of robust, healthy cattle, meant to symbolise the wealth of resources that the meat industry possesses. The small ceramic tiles underneath the ceiling showcase the main meat processing plants of the Soviet Union. The designs are based on the artist Livanov's sketches.

The tasting room on the first floor is lined with walnut wood; the same material was used for making all the furniture in the room, along with the doors, the window frames and the exquisite carved adornments. There is also a ceramic fountain in the room; it used to be decorated with a group of baby pig sculptures, designed by V. V. Trofimov,

an artist that specialised in drawing animals. Another feature of the first floor is the sales area, which is notable for its gorgeous combination of artificial marble and rusticated 'diamond' tiles. The chandeliers and unique ceramic panels, also created by V. V. Trofimov, play an important role in the interior design as well.

During the 1990s, the pavilion was leased for office and commercial spaces. However, it fell into disuse as soon as in the early 2000s; the upside was that most of the intricate artistic decor was preserved in its original state.

The Glavmyaso pavilion provided a visual link between the trade row and the Animal Husbandry expo buildings; its design combined a monumental scale, striking compositions and practicality. The ground floor was used for selling all kinds of sausages: boiled, stuffed, smoked and semi-smoked, in addition to smoked pork products, canned meats and concentrated foods. The Exhibition visitors could both examine and taste the exhibits. The latter was done in two spacious rooms, where a selection of meat delicatessen was served.

The first floor featured an open terrace with a view over the All-Union Agricultural Exhibition; the diner on that terrace served hot Moscow cutlet, sausages, broths and countless different meat sandwiches. All of these treats were also available for purchase at three Glavmyaso kiosks located throughout the Exhibition.

During the 1950s, when the entire Exhibition underwent reconstruction, these appetising exhibits received a new home, but the pavilion still retained its commercial function. The display rooms on the ground floor told visitors about the latest breakthroughs relevant to the biological, physical and chemical properties of raw materials, and demonstrated the production processes of the Soviet meat industry.

In the tasting room on the first floor, guests could order pirozhki, sausages, pelmeni and cutlets, made by special machines right there at the pavilion. Other tasty treats included dishes from semi-finished products courtesy of Moscow's meat processing plants.

Finally, there was a store with a broad selection of meat produce from Moscow and its suburbs.