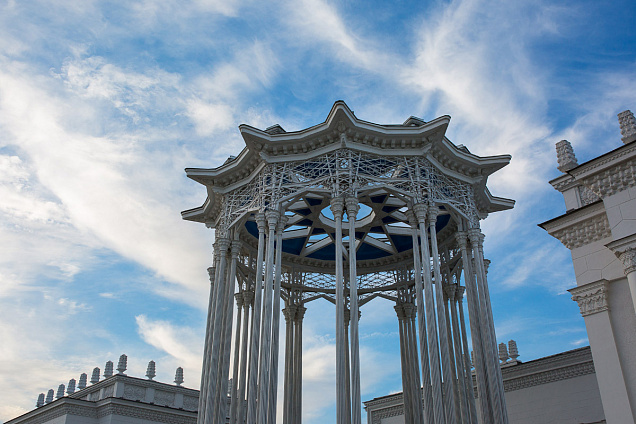 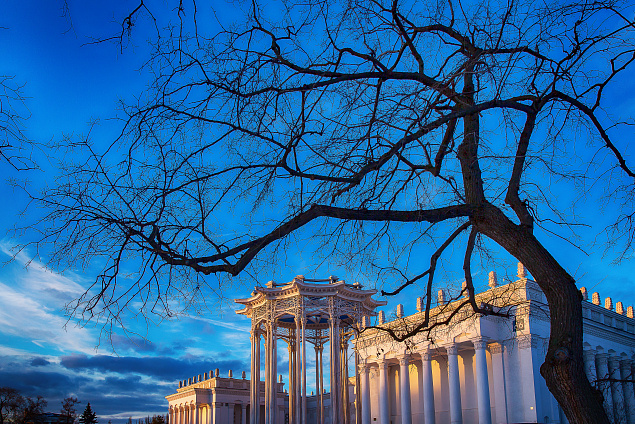 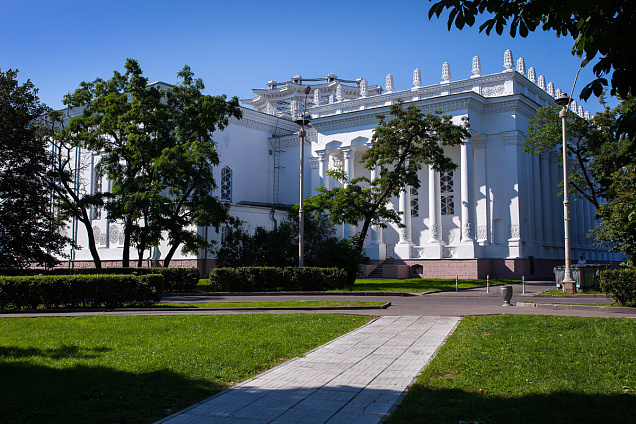 Pavilion No. 66 Exhibition and Culture Centre of the Republic of Uzbekistan

The pavilion's architecture is Stalinist classicism with elements of Uzbek national architecture.

The pavilion, built in 1937 to the design of Stefan Polupanov, was meant for three Soviet republics: Tajik, Turkmen and Uzbek. In 1938, however, it was entirely allotted to the Uzbek Republic. Designed with numerous references to Central Asian architecture, the building came out original and impressive. Despite being modest in height compared to the oppressive grandeur of its next-door neighbours, the pavilion was never obliterated by the architectural diversity of Kolkhoz Square.

The Uzbek SSR Pavilion was designed as a П-shaped building, its main entrance inside the open patio. Towering in the middle of the patio were some elegant propylaea topped by a crown entirely painted with ornaments. The outer surfaces of the pavilion's walls were covered with flat, all but outlinear, sculpted and ornamental reliefs that clashed with the vibrant carpet of the open patio. Greeting the visitors at the pavilion's entrance were bronze-plated plaster statues sculpted by Olga Manuilova. There was a fountain in the middle of the patio.

The beautiful wooden building fell into disrepair during the war years. As part of the 1950–1954 general reconstruction plan for VSKhV, the Uzbek SSR exposition was moved to another pavilion on the right-hand side of the Friendship of Peoples Fountain. It was not difficult for the attentive viewer to notice certain similarities, in both design and decoration, with the prewar Uzbek Pavilion in the new monumental building, which was in harmony with the post-war VSKhV look.

The pavilion built during the 1950–1954 reconstruction of VSKhV.

The new pavilion was nearly double the height of its predecessor, thanks to the basement substructure. Its broad outdoor staircase leads to the plaza in front of the entrance. In the 1950s, the staircase was flanked by the statues of a cotton harvesting woman and karakul sheep breeder on pedestals, but they have not survived. The two pools on either side of the staircase are remnants of a fountain cascade that began at the foot of two enormous painted panels (by Pyotr Kotov): The Grand Canal of Fergana and Chirchik Hydroelectric Plant Cascades, which were behind the elaborate columned porticos on either side of the pavilion. The composition presented the picture of the dual use of Uzbekistan's waterways to generate electricity and irrigate the fields.

The pavilion's centrepiece is the rotunda, a majestic steel canopy over the fountain, which sends its jets as high as 15 metres up. Its components were originally polychromatic, creating the illusion of 'living architecture'. The façade is covered with ornaments inspired by Uzbek folk art. The main entrance portal is a recess 'draped' with a majolica carpet.

The motif that recurs consistently in the pavilion's decor is that of a cotton seed case. It is woven into the ornaments of the ledges, capitals, panels and other elements of decor. The motif conveys the message of the Uzbek Republic's preeminence as a cotton-growing region.

Like its architecture, the exhibits inside the Uzbek Pavilion contributed to the stunning visual presentation of the Uzbek Republic created to the designs of Stefan Polupanov. Walking through the carved doors of the main entrance, visitors found themselves in a grand central hall. The original exhibits there were all devoted to cotton farming. The first exhibit that met the visitor's eye was a colossal stand depicting a cotton field that appeared to have grown under the 'sun' of the openwork dome richly adorned with ornaments. In the other rooms, the expositions devoted to karakul sheep breeding and silkworm breeding were also quite impressive. Mirror-finished floor to ceiling, their walls repeated the exhibits and elements of decor in thousands of reflections. In the corners, the stands that displayed differently coloured silk cloths and karakul skins had the sublimity of monumental columns.

Still, other rooms, sunlit and adorned with murals and painted panels, exhibited other rural occupations prevalent in the Uzbek Republic, like gardening, grape growing, animal farming and other crop farming. A separate section covered the Kara-Kalpak autonomous territory within the republic. Those rooms have since been remodelled into two large halls in the lateral wings of the building. Most of the original Soviet interior decor of the pavilion has reached us intact, including the light yellow walls, the ledges, ornaments on the ceilings and walls and the fine chandeliers.

In the old days, the pavilion's exhibits naturally segued into the Uzbekvino shop and Uzbek Chaikhana in the back of the pavilion, built to Stefan Polupanov's design and unveiled as part of the VSKhV reopening in 1954. The exquisite stem-columns, cornices and grilles, combined with the general air-filled design of the buildings, added up to create one of the finest spots on VDNH grounds.

The Uzbekvino shop (Uzbekistan after 1959, and Fruits and Wine from the 1970s on) offered the finest Uzbek wines, repeat Gold Medal winners at VDNH, as well as fruit and other Uzbek produce. The place was privatised in the early 1990s; its current name is Sadko.

The earliest Uzbek Chaikhana restaurant at VSKhV dates back to 1939. It was sited close to the current Building No. 620. It was a wooden building with seating for up to 300. The postwar VSKhV reconstruction had the chaikhana replaced with an Ice-Cream Pavilion, demolished in the late 1980s. The new Uzbek restaurant (renamed Tashkent in 1959) regaled the palates of VDNH visitors with fine Uzbek specialities prepared by the republic's top chefs up until the mid-1970s. Like its prewar prototype, the chaikhana near the current Building No. 512 turned heads with its sumptuously decorated colonnade 'threaded' with roomy terraces and small staircases. In the middle, surrounded by columns, was a pool with a cascade of fountains.

Pavilion No. 66 was named Soviet Culture in 1964. Once opened, the new exhibition space would host concerts, Russian and Soviet art exhibitions and other events regularly in its spacious halls. The Tajik SSR (1964–1966), Soviet Books (1966–1967) and Land Farming (1997) pavilions were affiliates of the Soviet Culture Pavilion.

In 1977, Pavilion No. 66 hosted a temporary Uzbek SSR exhibition as part of the larger We Are One Country exposition celebrating the 60th anniversary of the 1917 October Revolution.