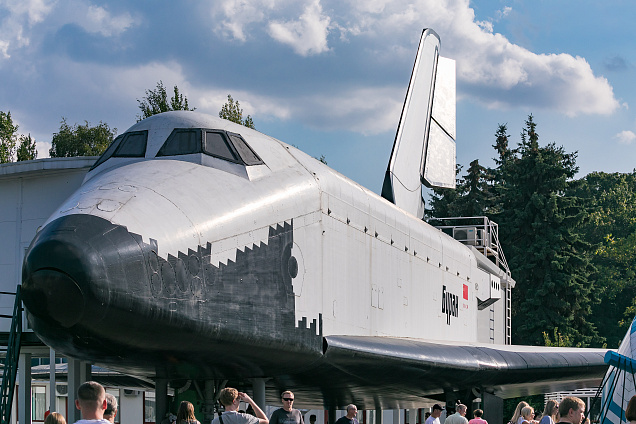 Replica of the Buran Space Shuttle

The replica of the Buran space shuttle is open to visitors. For now, you can only buy tickets online. Entrance is allowed in 20-minute intervals, from 11:00 AM to 8:00 PM.

Inside the orbital ship Buran BTS-001, there is an interactive museum. Here you can watch a movie about this legendary space shuttle and try to land it at the Baikonur cosmodrome in real-time using a simulator.

Onboard, guests will learn about how Buran was created. The tour culminates in the bow of the ship, in the upper tier of which there is a reconstructed command module of the Buran, with a control panel and a cosmonaut's seat. The cosmonaut is played by a Strizh-type dummy in a spacesuit.

On the lower tier, excursionists can try their hand at piloting a spaceship. Here, novice test pilots get a unique chance to land the Buran at the Baikonur cosmodrome from 80,000 m above ground. The programme carefully imitates a real landing from 15 November, 1988.

Events here
Exhibition Постоянная экспозиция интерактивного музейного комплекса «Буран» Today from 11:00
Schedule
Mo
Day off
Tu — Su
11:00 — 20:00
Facilities
Loyalty program
Tickets price
Adults
RUB 300
Discount ticket
RUB 150
Children from 6 to 16 years, full-time students and pensioners
Discount
20%
Applied to payment with Mir bank cards (does not apply to discount tariffs and is not valid with other offers)
Free admission
all visitors—every third Sunday of the month from 11:00 AM to 10:00 PM; all visitors—every weekday except Monday from 11:00 AM to 3:00 PM; full-time students of Russian and foreign universities—every Wednesday from 12:00 PM to 3:00 PM; children under 6, orphaned children, children without parental care, people with disabilities, veterans of the Great Patriotic War and members of large families with at least one child under 16.
Members of nonprofit organisations
Until 31 December, admission is free for members of the All-Russian Art Nonprofit Organisation 'The Union of Russian Artists', All-Russian Nonprofit Organisation 'The Russian Union of Art Photographers', Nonprofit Organisation 'The Union of Cinematographers of the Russian Federation'. Valid only when providing a certifying document.
Contacts
Phone
+7(495)544-34-00

The only flight of the orbital spaceplane Buran BTS-001 took place on 15 November 1988. The spacecraft was launched from Baikonur with the help of an Energiya rocket launcher. The flight's time was 205 minutes: the spacecraft completed two orbits around the Earth and then returned to the launch site, the Yubileiny airfield at Baikonur.

The flight operated automatically using an on-board computer and on-board software, unlike traditional manned NASA shuttle landings (atmospheric re-entry and slowing to the speed of sound are fully computerised in both cases). The spacecraft's flight into space and automated return to Earth under the guidance of the on-board computer earned it a place in the Guinness Book of Records.

During work on the Buran project, several prototypes for the mission's dynamics, electronics, airfield and other factors were devised and tested. These inventions remained with various research institutes and production associations after the end of the programme. A number of technical solutions developed during the creation of Buran are still used in rocket and space technology today.

Work on the Energia-Buran programme was suspended in 1990, and the programme was closed for good in 1993. In 2002, the only Buran shuttle to fly to space was destroyed by a roof collapse at the assembly and testing facility at Baikonur, where the legendary spaceplane was being stored alongside complete Energia launch vehicles.

A full-scale model of the Buran shuttle was installed in Gorky Park in 1993 after the test programme was completed. For a long time, it was used merely as an attraction. In 2011, when global reconstruction works started in Gorky Park, the Buran replica was closed.

In 2014, the replica of Buran BTS-001 was moved to VDNH. It was a one-of-a-kind transport operation; it took place on the night between the 5th and 6th of July. The biggest space exhibit in Russia, weighing 50 tons, was moved 15 km, from the Gorky Park to VDNH, in just 6 hours.